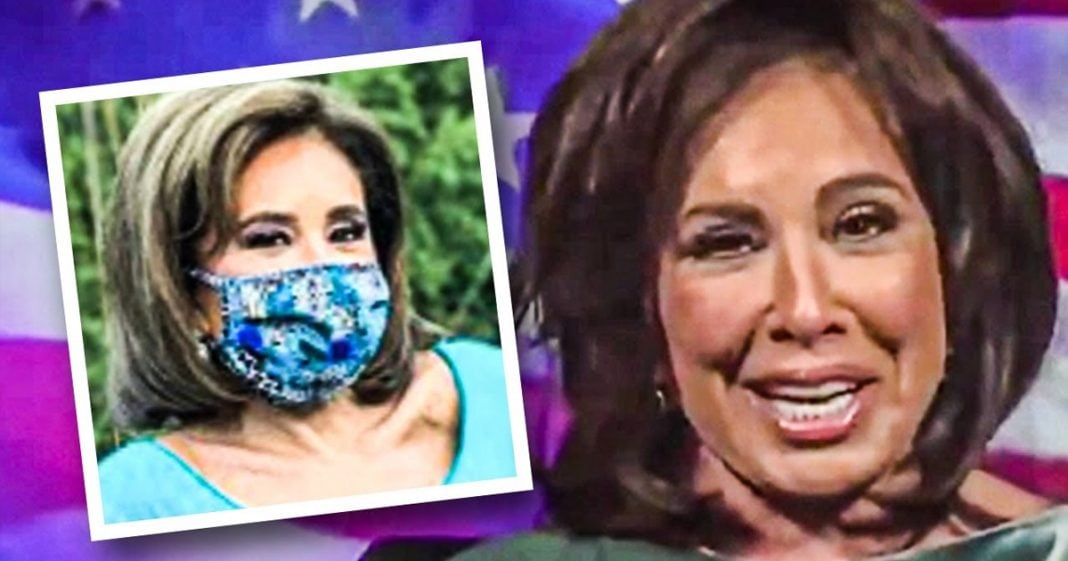 Fox News host Jeanine Pirro had the audacity to post a photo of herself wearing a face mask while eating outdoors, and her Fox fans were not happy about this AT ALL. Her audience showed how ignorant they really are with their responses, and it goes to show just how bad the poison being spread by the network can be when it is turned back inward. Ring of Fire’s Farron Cousins discusses this.

On Sunday, Fox news host, judge Jeanine Pirro posted a photo of herself on her Twitter of her dining outside. And she happened to be wearing a face mask, which is what is recommended by the centers for disease control and prevention. Even if you are out side, if you’re unable to socially distance from individuals as you would, if you were dining with them, like judge Jeanine was, it is suggested, recommended that you wear the face mask to help slow the spread and her followers. Those rabid Fox news fans of judge Jeanine lost their damn minds over her posting the photo of herself, wearing the mask. And here’s the thing. Folks, the reason she even posted the photo of herself wearing the mask in the first place is because she understands like a lot of other people in Fox news, who’ve changed their tunes in recent weeks, that this is very serious that the masks do in fact work, and that they have to start leading by example, the problem is they spent so many months peddling their poison, that some of their viewers as evidence from the comments on her photograph here, uh, they’re too far gone and they’re too far gone because you push them that way.

Laid you made these people that crazy and stupid judge Jeanine. And now you’re unhappy that they’re all coming after you with the same vigor that you encourage them to go after others. How’s it feel to be on the receiving end of that? Not so great, right? You kind of get, get the sense of how crazy your audience really is. Here is a handful, just a few, by the way, of some of the craziest responses from that Twitter photo, this is courtesy of raw story. You can actually see more of the links in the description of this video. These are awful. So here are some of them. Take it off, judge. Don’t talking about the mask. Don’t be a sheep. You’re better than that. I’m usually with you, but on this, no you’re being duped. The mask is political has nothing to do with health. Come on, judge, get over the scam already.

Well, I can’t allergies, asthma high blood had a mini stroke and carry this card. And the woman posted a picture of a card that looks actually slightly official, that gets from the government. And it says it’s from the FTB agency. But what that is is just a scam Republican rubs website called the freedom to breathe agency. It’s not a real thing. And that little card that she’s carrying says, I’m exempt from wearing a face mask and you can’t tell me what to do. Uh, yeah, that’s not an actual thing. And if a city or state does put a face mask ordinance in effect, uh, you can’t get out of it by carrying one of these cards that some grifter just made up folks. So, so don’t try it. Don’t be like this moron here. Uh, but that’s what she was doing. It’s not real, but she thinks it’s real late.

That’s how dumb this Fox news viewer is. And another one, this is even dumber than the person with the fake FTB agency card. Take it off plays. You are inhaling your own CO2 at 8,000 parts per million, within a few minutes, that is toxic. It creates an acidic environment in your body within which Aaron’s cell reproduction, thrives equals viruses, cancer, fungal, and bacterial infection. Pneumothorax is also taxable. And that’s why doctors die every day from wearing masks. Right? Cause that’s the thing that happens. Right. Um, any doctor that’s ever performed a surgery immediately dropped dead right after, after having to wear a mask for hours on end. Right? Right. You, people are insane. Like this is way beyond like, you know, when you, when you think of things throughout history and I’m sorry, but I’m just, I’m still shocked. Like I even, I had to type these out to put them on the paper and still even reading them again for like the fourth or fifth time.

They’re still shocking that they’re that stupid, but it does help give you some, you know, some idea of how, you know, like the, the, the Jim’s day, uh, uh, Jim Jones, cold, you know, the, the drink, the Koolaid, which is where that came from. Like, yeah, I, can I get it now I can see how people truly are that stupid. Cause for a lot of us who aren’t at that level, it’s hard to comprehend how people can be like that. But then when you see this, these people are psychotic. These people do not have minds of their own. And they’re sitting there calling her the sheep saying that something is wrong with her because she’s listening to doctors and putting on the mask, these people are making up phony conditions that aren’t real. And if they were real, they would have already resulted in deaths of hundreds, of thousands of Americans, including medical professionals who are forced to wear a mask all the time. This is nuts. And I’m sure there’s probably some of them watching this video. And I hope you are because I want you people to know that really truly from the bottom of my heart, I think you’re nuts. But I also really think you do need help. This isn’t about insulting. You, you people need help get it. Do what you have to go see professionals, because this is not a normal way of behaving and freaking out at a Fox news host for listening to the scientists. That’s about as crazy as you can get.