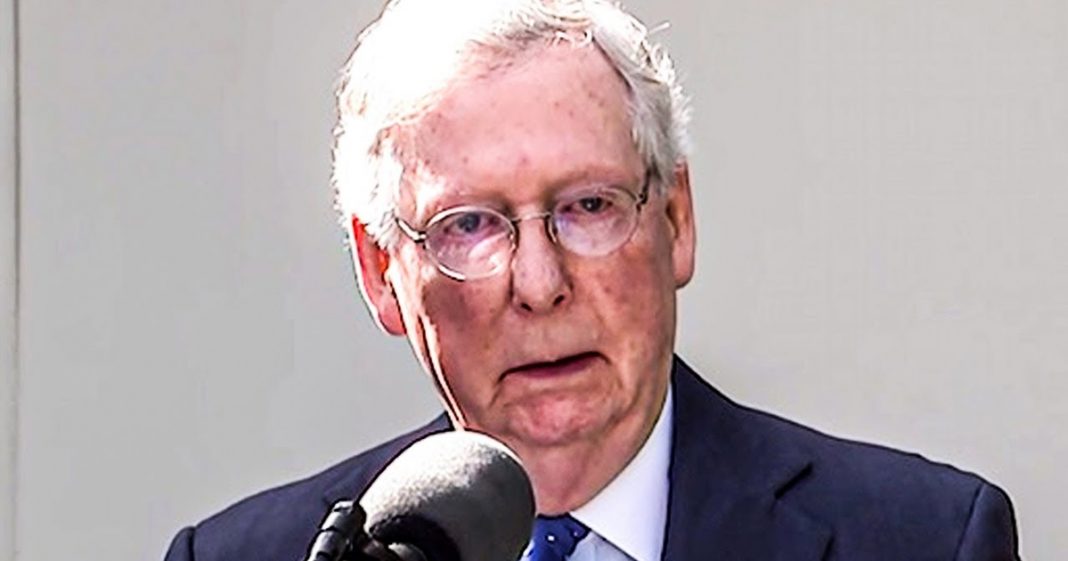 Congress is heading out on a two-week recess vacation after spending the past two months doing absolutely nothing to help struggling Americans weather the pandemic. This body is a disgrace, and not a single member of the leadership of either party deserves another term. The American people are suffering greater than at any other point in modern history, and they are doing nothing for us. Ring of Fire’s Farron Cousins discusses this.

Well folks today is the first full day, a vacation time for the house and Senate for the next two weeks starting today, they adjourned yesterday. So it starts today, right? The first full day, he didn’t have to set an alarm. They are on vacation, living it up, soaking in that summer sun doing just whatever the hell they want to do. Unlike the last two months where they’ve sat in Congress doing absolutely nothing to help American citizens. And I want to reemphasize that this is not an attack on the Republicans. This is not an attack on the Democrats. This is an attack on every single one of you assholes. You’ve spent the last two months doing absolutely nothing to help American citizens who are struggling in the middle of a pandemic, desperate for someone, anyone to emerge as a fricking leader on this issue. And every single one of you failed and not.

And none of you care, at least nobody in a leadership position in the house or Senate cares. Yeah. We’ve got a handful, a handful of decent folks in the house and the Senate, maybe six or seven in the house, maybe two or three in the Senate. And that is it. And I’m not exaggerating. That is it. That is all we have in terms of people who are actually out there actively fighting to give American citizens something worth clinging to during this pandemic at a time when 46 million Americans have lost their jobs, it’s been since April, that Democrats and Republicans in the house and Senate got together for negotiations on stimulus packages. That hasn’t happened since April. So for may and June, they did nothing. They did nothing Democrats to their credit and the house did call for and more negotiations. They did want to sit down and talk to Republican said no.

So the Democrats said, okay, that’s, that’s cool too. You know, we don’t, we don’t have to talk that way. That’s how they reacted. They didn’t force the issue. They didn’t go out there. Use the bully pulpit, get out there and tell us every single day that here’s what we want to do. But your Republican friends in the Senate are too busy, confirming Trump’s judges because that’s all Mitch McConnell wants to do. They didn’t want to get out there and tell us that we know that that’s what happened because we read the news and I talk about this kind of crap. Every single day, the Democrats could have done more and they didn’t, the Republicans could have done something and they didn’t. None of them cared enough to do enough and Republicans in the Senate who, yes, by far, they are way worse than the Repub Democrats in the house.

But that doesn’t excuse the behavior of the Democrats in the house. But nonetheless, the Republicans in the Senate have made it clear that they think that since we got a decent jobs report this past Thursday, you know, some of the jobs we lost came back, they think, okay, well then I guess we’re done. That’s what they think they think we do. We don’t have to do anymore. We’re done jobs came back. Some of them, you know, less than a 10th or whatever it is, but that’s it. That’s all we got. And we’re not sure if we’re going to get more of this week. We’re not sure if it’s going to come back this month. We’re not sure what’s going to happen. And they don’t care. They think they’ve done plenty. Meanwhile, we just passed the first of the month. Last week, people couldn’t pay their rent.

People can’t pay their mortgages. People can’t pay their other bills because there are still more than 42 million Americans. Who’ve lost their jobs since the beginning of this pandemic and Congress doesn’t care. So enjoy your vacation folks. And hopefully come November. We can send every single person who is in a leadership position in both the house and the Senate on a permanent vacation from these jobs because they don’t deserve them. There isn’t a single person in leadership of the house or Senate that deserves to keep their jobs. I don’t care which party they’re in. This isn’t about tribalism. This is about the facts. And the fact is none of the leaders in DC, given a damn about working class Americans and haven’t for quite some time.