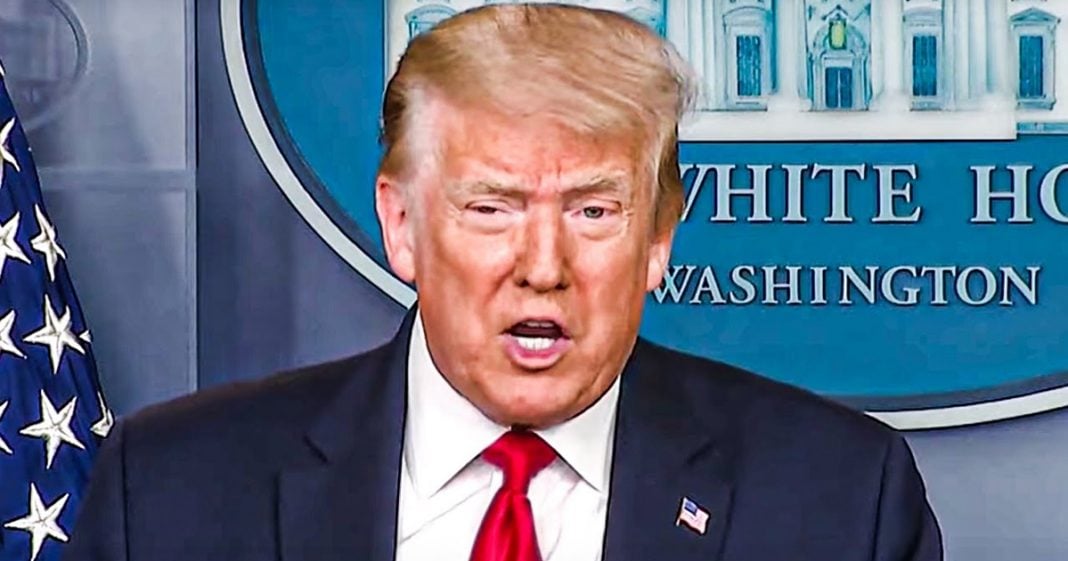 The United States now stands alone among all the countries on earth, not just in the total number of Covid-19 cases, but in the fact that we have completely given up trying to fight it. The new messaging coming from the White House is that we will just have to find a way to live with the virus, even as the rest of the world closes their borders to Americans because they actually did what was needed to beat the pandemic in their countries. Ring of Fire’s Farron Cousins explains what’s happening.

The United States now stands alone. Not only as the country with the highest number of confirmed COVID-19 cases, but also as the only country on the planet, that’s decided to hell with it. This is just our lives. Now, every other country that has been infected with this pandemic has at least on the national scale, tried to do something, you know, enacting some kind of national policy, national stimulus, uh, national lockdown, national quarantine, national social distancing policies. They’ve done that. We here in the United States bailed out big businesses. Uh, we made a lot of money available for small businesses, but ended up letting the big vultures come and take that for themselves as well. And we gave air, uh, half the population of the country, 1200 bucks. Once the countries that were able to overcome coronavirus were given their citizens one to $2,000 every single month during this so that they would be okay, staying home.

They wouldn’t feel the need to rush out in the middle of a pandemic and go back to work. They would be taken care of, you know, they forced the quarantine. They forced these stay at home orders. I mean, some countries actually went around door to door, checking people’s temperatures, but also making sure that they had food and the necessities that they needed to be able to survive here in the United States. Nope. A patchwork of 50 different States coming up with 50 different plans, which all became moot. The second one person traveled from this state to that state, because maybe you had lack standards here, but the tough standards here, but you just brought your possibly infected ass over to this state. We did nothing nationally really to solve the problem. And now the federal government, the Trump administration has said we’re giving up and their new policy. Now their new talking point that they are crafting and tinkering with is that we as Americans just have to figure out a way to live with it. This is our life. Now deal with it. Go to work, go contribute to the economy slave.

Oh, and, uh, try not to get sick. Cause if you do, you know, yes, we have lots of treatments for it. Now the white house is telling us, but what they’re not telling us as one. No we don’t. And to the few that we do have, we’re going to cost you thousands of dollars. Literally. Some of them, in fact, the most effective one, I think is a desert desert. Uh, if that’s how you pronounce it, uh, three grand for a treatment for a course of that three grand, but you only gave us a stimulus of 1200. Yeah. How’s that supposed to work? What about the 40 plus million Americans who lost their jobs? And Trump’s out there saying, Hey, we added 4 million jobs in June. Cool. We lost more than 46 million overall. So we’re still at a negative 42 million from when this thing started. What about those?

This administration has given up because they don’t know how to do it. And the problem is there are people within the administration who do know how to do it, but those people aren’t allowed to set the policy. Dr. Fowchee, for example, he is a smart person and he has been the sole voice of reason from this administration. Trump could have emerged as the hero in all of this, by the way, all he had to do was tell the treasury. I am ordering you to send out monthly stimuli, stimulus checks to every American citizen, regardless of income, regardless of income, do it. Every single person, he would have been the hero. He would have had his name on those checks. And it would have prevented a lot of the economic hardship that we are seeing in this country right now, Democrats could have emerged as the heroes, if they had in Congress kept pushing more stimulus for American workers instead of saying, Oh, well I guess the Republicans don’t let us.

And they want to make corporations immune from lawsuits. And maybe, I mean, I guess we’re okay with that too, but we can’t do more stimulus. I just, the weakest group of babies, I think I’ve ever seen absolutely pathetic. And then the Republicans are absolutely corrupt. That is uniquely American folks. I’m not saying that other governments aren’t weak or corrupt, they are. But the combination that we have seen here in the United States, that’s why we didn’t beat the thing. That’s why we didn’t beat this virus. That’s why just about everybody else dead, because they didn’t have to put up with the same crap that we have to put up with. They also don’t necessarily have the same kind of public that is as arrogant as we are, as Americans across the board, we failed on everything we suck and this virus exposed a lot of that, not just with how we handle the virus, but just as who we are, you know, we’ve spent centuries really building this facade of being this massive, super power. Nothing can take us down. We’re the best we can do things better than any other country on earth. And then suddenly a little tiny microscopic virus comes along and exposes all of that as a fraud.

And it didn’t have to be is you have to be exposed as frauds. We could have led the way, but instead we have a giant man-child as president, we have the Democrats imaginable in charge of the house and the most corrupt Republicans in history, running the Senate, the three of those things combined made it impossible for the United States to beat the pandemic. And now the white house is telling us, Oh, well, you’re just going to figure out a way to live with it because apparently we’re done trying to beat it.