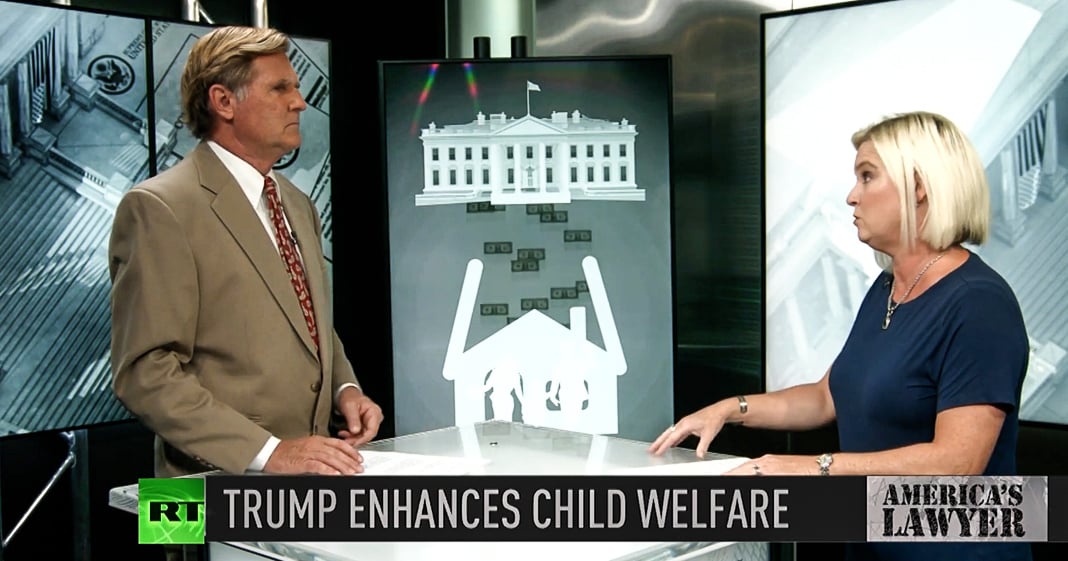 Mike Papantonio:             Every now and then you see something like this, you go, wow. Wonder how that happened.

Mollye Barrows:                So that’s just what, that’s just it. So this executive order is basically geared to address a whole slew of problems, including those. Kids aging out, how States assess if a children needs to be removed from the home, providing funding to make sure that children can go with family members who are willing to take them. Because what happens is that sometimes in a separate court hearing a family member might take custody of a child, and then it becomes outside of state care, if you will. And so they don’t have the money and the resources that say a foster family might get from the state to take a kid in. So you’ve got 400,000 kids in foster care, 125,000 on waiting lists. The average wait is like two years, they’re trying to find forever homes. And it’s just a real convoluted system of, you know, who, who are these kids in foster care? What kind of families are they coming from? What kind of data is being collected on them? How much money are states spending? And this order addresses all that.

Mollye Barrows:                I think probably what, the little bit that I’m getting out of this is one of the big benefits will be that he’s basically putting their feet to the fire, to the, you know, department of health to say, hey, we need to do a better job of collecting data. We need to know why these kids, why foster families aren’t signing, why more foster families aren’t signing up. And those that do sign up. How long are they keeping kids? How long are they staying a part of the program? Are they getting out of the program? Why are they getting out of the program? Is it because of lack of funding? Is it because of lack of support? So this program is really going to help give States an idea of how to collect data, how to address the problems that are particular to their areas and that way they can make specific plans to help these kids and these families.

Mike Papantonio:             But it, there was no problem with the system. I wasn’t really part of the system. I would just moved from family to family about eight different families growing up and it worked out great. So there’s a way to do it. And I hope that this centers in on that a little bit.

Mollye Barrows:                Does because you know, here in Pensacola, we have had over the years, some of the highest cases of child abuse reported in the state. And sometimes it’s because there have been legitimate with child abuse and also because of lack of training in recent years, because the people that are coming in to assess whether or not a child needs to be removed from the home, don’t always have the adequate training. And they’re concern that well, there’ll be liability if I make a bad call and I don’t remove this kid, but there’s a lack of homes.

Mollye Barrows:                Yes, and so, at least Trump addressed this in this executive order, it is going to give money to, to the data and maybe through that data and the resources, they can help more families and do more to place these kids in forever homes and help them find adoption. Because you know, all boats rise with the tide, which I think is essentially the purpose of this, which is, you know, kids in order to succeed, these kids are just as capable as any kid. You’re a perfect example of that, but they need the support of good families and those families need support from the state in order to give those children that support.