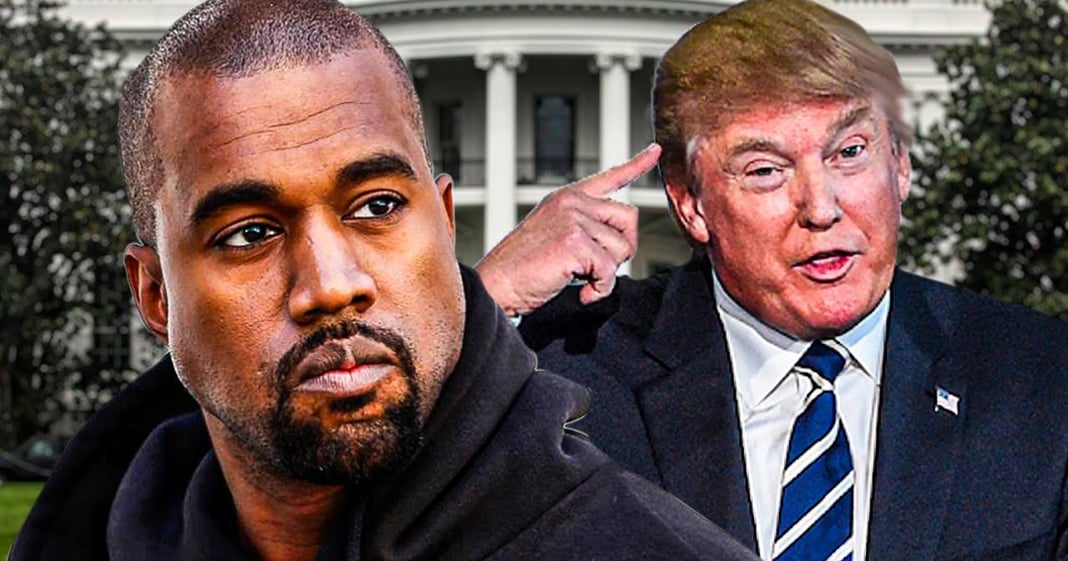 One of the more depressing side effects of the Trump presidency is that any wacko now thinks that they have what it takes to lead this country. The latest person to fit that description is Kanye West, who announced on July 4th via Twitter that he would be running for President this year. He had built an unlikely friendship with Trump, and now he is apparently challenging him for the White House. Ring of Fire’s Farron Cousins explains what’s happening.

On Saturday, 4th of July, Kanye West tweeted out something that may have broken Donald Trump’s heart. And that’s something was Kanye, his announcement that he is going to run for president this year. Here’s the tweet he said, we must now realize the promise of America by trusting God, unifying our vision and building our future. I am running for president of the United States, hashtag 2020 vision, um, Kanye and Donald Trump. Uh, that’s been an unlikely Alliance, uh, out of all the weird things that have happened during this administration. That was probably one of the least predictable things. Uh, Kanye visited the white house. He’s actually done a little bit of good, you know, he and Kim Kardashians, uh, on the issue of prison reform. So, so that’s good, but Kanye is also kind of going off the deep end a little bit. He said, when he wears his MAGA hat, he feels like he’s a superhero, which is a little weird.

And now though, in spite of the fact that he has been good buddies with Donald Trump, he has been an artist and supporter of Donald Trump. He says he is running against him this year. Well, here’s the thing, folks. He actually has already passed the deadline to run as an independent, in most States in this country. So, so that can’t even happen. He would have to actually find a real political party to run us, their candidate, eh, that ain’t going to happen either. He does have time to do that technically, but according to the FEC, he has made no filings. Uh, he has no staff. He has no platform. He has nothing. There’s absolutely nothing set up that would suggest that Kanye West is legitimately running for president of the United States. Uh, what is actually on the horizon though, is that he has an album coming out.

And so this is likely just a promotional tool, a way to get a lot of attention. And then suddenly once everybody’s looking at him, he’s like, Hey, here’s my new album. Ha ha. I’m not running for president cause a whatever. But here’s what it says to me. It says that the office of the president has been cheapened so much over the last few years. Uh, not just by Donald Trump really, but cheapened overall, you know, since really, since Nixon, you know, cheap and or by bill Clinton, cheapened even further by George W. Bush and then cheapened to hell and back by Donald Trump cheap and to the point where it has now become a joke, it has become a publicity tool. That is what Kanye West is using it. As you know, when Donald Trump welcome people like kids rock into the oval office, you know, that, that was kind of the end of the legitimacy of that office. Yeah. Horrible things have happened in that room in the past. True. You know,

But this has really turned it into a spectacle, you know, making it, not just a place where you go and half your affair, where you go and you plan your illegal Wars, but a place where you can come and get a photo op and feel powerful for a minute. That is what Trump has done. He’s cheapened it to where it’s, you know, you stand in line, you get your picture taken, maybe cost you a couple dollars to get in there. Who knows, but that’s what it is. And that’s what Kanye West wants to use it for. It’s a publicity stunt. He’s not actually running for president against his good buddy, Donald Trump. And even if he did, he’s not going to get enough of the vote to even register across this country. People look at Kanye West today a lot. Like they look at Donald Trump at some point you were probably relevant, but a lot of people don’t even know what it is that made you famous in the first place. At this point, all you are is a self hyping egomaniac who has no business whatsoever trying to run the United States.