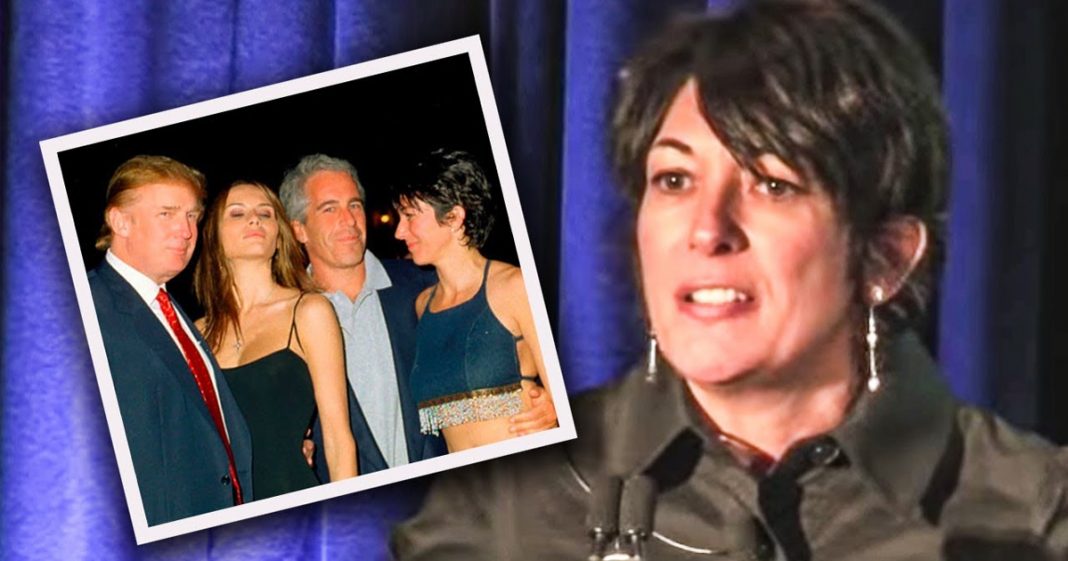 Donald Trump, Bill Clinton, Elon Musk, Prince Andrew – These are just a handful of the powerful men who have been photographed numerous times with Ghislaine Maxwell and Jeffrey Epstein, and now that Maxwell has nothing left to lose and everything to gain, she might finally be willing to turn in all the men who engaged in illegal activities with Epstein’s sex slaves over the years. Ring of Fire’s Farron Cousins explains what could happen, assuming Maxwell is around long enough to start singing.

When Jeffrey Epstein was found unresponsive in his jail cell a year ago, one of the more disappointing things aside from the fact that that pervert a would never face justice, the way that he should, the way that would give the victims a little bit of closure. Uh, one of the other great disappointments was that a lot of the names of the men who also abused these women died along with Epstein, except for the fact that Ghislaine Maxwell also knew who was at these parties. She knew who, uh, she was forcing these young girls to service. And now that Ghislaine Maxwell is also in custody,

Assuming she survives long enough and you know, nothing happens to her. There’s not any kind of camera malfunctions and guards randomly falling asleep all at the exact same time here, if Ghislaine Maxwell, avoids any kind of accidents like that, it is fairly safe to assume, according to one former Epstein business associate that Maxwell is going to sing like a bird and name, every single name that she knows in order to avoid a lengthy prison sentence that former business associate his man by the name of Steven Hoffenberg, who recently spoke to page six. And he said that absolutely Maxwell whom he knows, uh, is going to name the names. She’s going to say, who was there, who was with these young girls who did what? Because as Hoffenberg points out, Maxwell is accustomed to a certain way of life. That’s actually why she was attracted to Epstein.

He offered her that kind of life that she was used to over in Europe, but the family had lost it all. She came over here, wanted the lifestyle back and she got it. She goes to jail. She loses it again. So she wants to make sure that whatever jail sentence she gets, and yes, she is going to get one that whatever it is, it’s as lenient as possible. And the only way to do that is to start naming those names. Now, in the last couple of days, we have seen photographs of all kinds of powerful men with Ghislaine Maxwell start popping up. Uh, Ken Klippenstein a great investigative journalist with the nation. Uh, gotten a bit of a feud with Elan Musk, uh, over the past few days because he was posting the picture of Ilan and Ghislaine Maxwell and encouraged others to reply to everything Musk says on Twitter with that photo, uh, worked pretty well.

It really got under Ilan skin, but yeah, Elon Musk right there picture Ghislaine Maxwell. Donald Trump is in countless pictures with Ghislaine Maxwell, uh, bill Clinton, walking, Chelsea Clinton down the aisle at her wedding. Who’s standing there off to the side Ghislaine Maxwell. This was everywhere. And she knew everyone and she knew who was coming and going from Jeffrey Epstein’s private Island. She knows who was on the airplane and who was on the airplane with them. She knows. And that’s why it is important that Ghislaine Maxwell be protected. You know, we don’t want to see what happened. Epstein happened to her. We didn’t want to see it happen. Epstein. We wanted the names back then. And more importantly, we wanted closure for these young women whose lives he ruined. That is the most important thing. And if we couldn’t get it from Epstein, then we’ll get it from Maxwell.

She is listed in a couple of the lawsuits that, uh, had been filed against Epstein as well. So we’ll see. But if Maxwell can give us the names of some of these other men who also abused these women, that’s more closure for them. This is not about any kind of retribution and feeling good of haha. We’ve exposed you. This is about making the lives of those women whole again, something was stolen from them. And the only way, the only way to repair that inside of them is for them to have some kind of closure, some kind of conclusion that works out in their favor, anything short of that. And it’s unlikely that these women are ever going to completely feel whole again, this may not even do it, but right now it’s probably the best chance we have to let them know what justice actually feels like.

So Maxwell has a duty, a responsibility to let us know who these people are. So we can go out and seek more charges if we need to. Uh, Alan Dershowitz has already made it clear. Once again, I didn’t do anything. I know I’ve been accused, but I didn’t do anything. I didn’t do anything. I didn’t do anything. And I hope Epstein has tapes of it all so that you can see me not doing anything. Dude, you were his lawyer. You do know if he has tapes, right? And you know, we know that cause we’re not idiots. So you’re sitting there on Twitter on Sunday saying, Oh, I allegedly taped everything. And I hope he did. So he could say, I’m innocent. You were his lawyer. You were his friend. You know, if he has tapes, but you said you hope he did not. I know he does. So we’ll see how that plays out as well. But anyone who abused any of these girls needs to be named. They need to be brought forward. They need to be publicly shamed. And if the statute of limitations allows, they need to be prosecuted or at the very least sued in civil court to give these women part of their lives back.