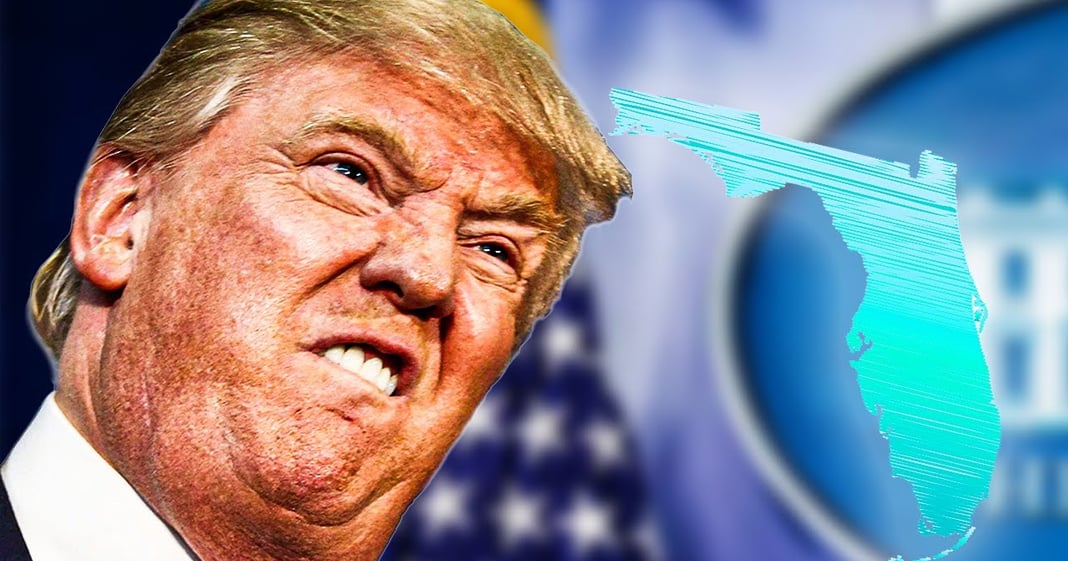 With many other swing states looking like a lock for Joe Biden at this point, Donald Trump is pinning all of his hopes on the state of Florida. But according to interviews with Florida Republicans who voted for Trump in 2016, they have had enough of Donald and are ready to move onto a new chapter. These folks may not represent a majority of Florida Republicans, but their words are sending a message that the GOP cannot ignore. Ring of Fire’s Farron Cousins discusses this.

Donald Trump is having a lot of problems with swing States all over the country. Um, you know, in the Midwest, a lot of those swing States right now, the poll link shows that Joe Biden has it. Uh, obviously that can change between now and election day, but it hasn’t changed in the last couple of months. And on current trajectory, it doesn’t look like it’s going to change. It could, what did that look like? It is so Trump, if he loses those Midwest swing, States has one hope and that hope is to carry the state of Florida. But even Florida now might be out of reach for the president as his largest demographic in the state, elderly voters, a demographic that he won by the way, by 21 points over Hillary Clinton in 2016, that demographic is disappearing for Donald Trump, according to a recent CNN segment, where they went around and they talked to a bunch of elderly Trump voters in the state, these former Trump supporters are furious with the president.

They’re unhappy as one of them put it with everything that he has done since becoming president. Here’s a couple of quotes from some of these folks. Uh, this one is a man by the name of John Dudley, 77 years old, voted for Trump in 2016, and then says the president immediately blew it. Here’s what he has to say. We were so excited in the beginning of businessman to run our country like a business. And then it hasn’t happened. Well, actually, uh, mr. Dudley, let me go ahead and correct you on that point. That’s exactly why Trump has failed. He failed because he ran it like a business because you can’t run government like a business. Do you know why mr. Dudley? Because America is not a business. You don’t run it for a profit. You run it for the benefit of the people who were in that country.

You can’t do that the same way you run a business. It’s a, it’s a recipe for disaster. And that’s what we’re seeing. Cause he did run the country like a business and he ran it like one of his businesses where he just ran it into the ground and just, Oh, well leave it for the next person to clean up. Uh, but mr. Dudley did continue. He said, we’ve got to get a new guy. Our president is erratic. All he succeeded in doing is juicing up the stock market. Now that’s gone to pot because of the Corona virus. So it seems to me that mr. Dudley here is still kind of saying like, well, I mean, if we still have the stock market, I guess, you know, maybe it wouldn’t, but no now even that’s good. God, I’m not sure sold on mr. Dudley being a never Trumper by the way.

Those are the people we need as our allies. We need them for trade partners. We need them in case we get into any kind of trouble and need some backup. Like we have to have those alliances. We have to have those friendships. We have to have those countries there. And Trump has pissed every single one of them off except for the countries that absolutely would not help us out. If we ever got between a rock and a hard place, you know, North Korea, Saudi Arabia, they’re not going to be there when we need somebody to be there for us. They’re probably going to help, you know, stab that knife a little deeper into our back. Right. But that’s what Trump has done. So nonetheless, uh, you know, these couple of people here and there were actually more in the CNN segment, obviously these do not represent all of the elderly voters in Florida, but just as last week we saw the New York times go out and interview swing, state voters, not in Florida.

Uh, but you know, Wisconsin, Michigan with Carolina, they’re saying the same kinds of things. The people are tired of this. They voted for the man in 2016, they have watched everything that has transpired with this presidency. And they’ve had enough. It’s not cutting it. It’s not working for them. It’s not working for anybody except for Donald Trump. He has made a heck of a lot of money off being the president of the United States. He has put a heck of a lot of judges on the benches throughout this country. That, I mean, that is his legacy. That is something that is going to last for generations at this point. But when it comes to doing anything at all, that actually helps the average American citizen. It’s pretty much universal agreement at this point that Trump hasn’t done a single thing to benefit those people.