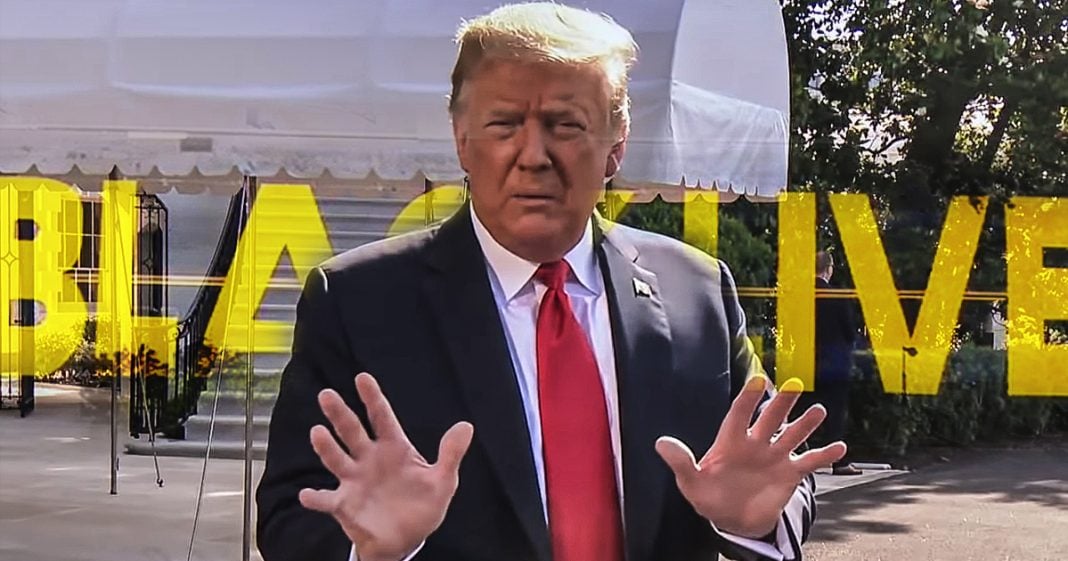 Donald Trump this week called the forthcoming Black Lives Matter mural in New York City a “Symbol of Hate” and said that the money for the mural should instead be spent bulking up the New York City police department. The President is on the wrong side of history, but he also believes that this is the only way that he can scare his base enough to actually turn out for him in November. Ring of Fire’s Farron Cousins explains what’s happening.

Earlier this week, Donald Trump referred to the black lives matter mural that New York mayor bill DeBlasio is going to put in front of Trump tower. Donald Trump, president of the United States referred to this mural as a symbol of hate. Here’s what the president said on Twitter NYC is cutting police number of monies by $1 billion. And yet the New York city mayor is going to paint a big, expensive yellow, black lives matter sign on fifth Avenue, denigrating this luxury Avenue, maybe our great police who have been neutralized and scorned by a mayor who hates and disrespects them. Won’t let this symbol of hate be a fixed to new York’s greatest street, spin this money, fighting crime and step. All right. Lots to unpack from this racist assholes tweet here. And yes, he’s a racist asshole. So let’s just straight up call him that let’s let’s let’s not try to use coded language. I don’t care. Obviously, you know, YouTube. Doesn’t like you saying those things, the president of the United States is a racist asshole, and we’re going to call him a racist asshole because he’s a racist asshole.

So here’s the thing, Donald Trump said that this mural is a symbol of hate. It’s a symbol of something, alright, it’s a symbol that, uh, even Democrats still don’t quite understand the issue. And they’re just doing these symbolic gestures, uh, which really aren’t going to fix the problem at all. This mural is not going to serve any real purpose. And DeBlasio has even admitted by the way that he’s putting in front of Trump tower to send Trump a message. Well, that’s fantastic. How about instead you send the message to the police officers who keep murdering black people in the United States. How about we send them a message? That’s the message that needs to be said, and that’s the issue that needs to be addressed. But instead, DeBlasio wants to get into this pissing match, which has done nothing more than to help expose to more people. The fact that Trump is a racist, it is not a symbol of hate and sure, the murals going to be beautiful.

It’s going to look wonderful. Yes it is. But it’s not going to solve any problems. That’s what needs to happen. You know, a democratic members of Congress putting on African apparel and taking a knee in Congress that, that doesn’t solve anything either. It’s all for show and I’m sick and tired of Democrats pretending to do something that’s really nothing. And then Republicans of just being straight up racist, yo, it feels like there’s no body. There’s no body really that that, that we have on, on the side of, of doing something. And that’s, what’s terrifying and that’s, what’s disappointing. The Democrats could be better. And if any side is to do something about it, it is the Democrats, definitely not the Republicans, but what Trump has said here, that this is a symbol of hate. It shows where he is going for the rest of this election.

He is absolutely doubling down on racism. He is choosing to side with these killer cops and he’s choosing to signal to his base and to voters out there who may be on the fence, that he doesn’t care about black people. He doesn’t, he never has. He has never cared about any voter. Uh, at Lester white. He knows he’s not going to gain any African American support between now and the election. And so he’s not even going to try. He’s not even going to pander to him anymore. Like the Democrats are, he just says to hell with it. I’m going to side with the cops and maybe they’ll kill more of you. And this street is supposed to be luxury. We can’t denigrate it. As he says, with a mural of black lives matter that might depict black people on it. I hope everybody read between the lines on what he said to that tweet in that part, because that to me is the most disgusting part. That’s even more disgusting than calling the mural itself. A symbol of hate him saying we can’t denigrate a luxury with black people. That’s what he said. And I guarantee you, that’s what he meant.