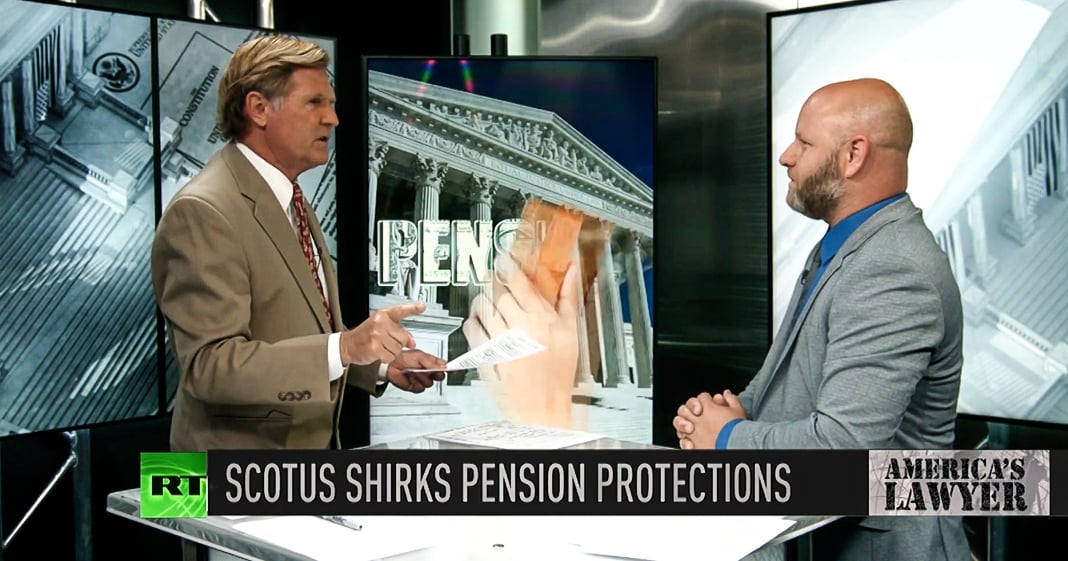 Mike Papantonio:             The Supreme Court last week issued a ruling that could allow big banks to go back to stealing from mom and pop. Happy days are here again. Right? You know, they never left. I mean, really, they never left. But pick this story up. This is an ugly story. Again, where do you see this story? Nobody reports this story. They’re told, they report social issues, but they don’t report issues like this, that put mom and pop out of the ability to pay their rent and to eat.

Farron Cousins:                  So what has happened here last week was the Supreme Court issued their ruling in the Thole versus US Bank. And it essentially, if you boil it down to, you know, the most basic concept here it is, the banks can steal your pension. But as long as if they don’t steal all of your pension, you don’t have the right to sue them. It’s only once they take the last little bit of money out of there, then you plaintiffs, mom and pop who’ve been saving up your whole lives. If they’ve taken every dime for you, or from you, then you can sue.

Mike Papantonio:             Now, Kavanaugh wrote the opinion, very predictable. He’s a little twit who has always worked for corporate America. Never done anything for consumers in this country. Has always been at the beck and call. He is their boy. He writes this opinion and so the opinion comes out and says, hey, wait a second. We can’t even look at this because you didn’t bankrupt the pension program. You had to bankrupt the pension program to say that everybody has a loss. You can’t say that you have a loss to even bring the case, right? You don’t have what they call standing because you didn’t, the company is not bankrupt. So this bone head says, yeah, this is how we’re going to protect wall street one more time. $230 billion, $230 billion moves from pension programs to money predator managers. They call themselves managers. They’re predators. That’s all they are.

Farron Cousins:                  Right. And what’s interesting about this, you know, to kind of hit on the point you just brought up. You know, these are the, the pension funds put together by a corporation or a public entity and everybody shares off the pension fund and they’re guaranteed a certain amount from the pension fund. And so what this ruling says is, well, you can’t prove that even though they stole money and yeah, there’s not enough in there, but your pension technically could be okay, but his could not. But he, maybe his is okay and yours is not. Since we don’t know, since there is that uncertainty, nobody has standing because technically your pension is okay, everybody else’s is not. So it’s a ridiculous ruling.

Mike Papantonio:             Here’s what they do. Here’s what these folks do. Okay. This is what they have caught these pension managers doing. Inflating their own stock, making decision, I’m going to inflate this stock, not telling anybody about it. I’m going to exercise stock options for my stocks to benefit them. I’m going to, I’m going to manipulate the accounting rules to where it looks like we’re doing a good job. All of those things, according to Kavanaugh, are okay. You can do that wall street because I’m one of you. That’s what he is. He is a total utter sellout. And the guy, you’ll see Kavanaugh coming back to this issue, he’ll vote sometimes on social issues. Yeah, I’m good on social issues. But where it comes to issues that put mom and pop in dest, in a destitute situation, he doesn’t care. On, you’re going to see it on, on pharmaceutical cases. If a pharmaceutical, pharmaceutical company kills thousands of people, Kavanaugh is going to make a ruling that allows them to do that. If mom and pop lose pension programs, that’s okay. If workers’ rights are at risk, that’s okay. If the environment is raped by corporate America with Kavanaugh types, that’s okay. And you know what, the truth is, it’s not just Kavanaugh. It’s all these federal judges that are being appointed by, by, by Trump. And I’d love to say there’s a difference between those judges and the Trump judges that were appointed, but there’s not.

Farron Cousins:                  Right, the only difference between the Trump judges and the Obama judges is the social issues. We have seen plenty Obama judges pillage the environment, absolutely destroy consumers’ rights, destroy workers’ rights. And we have talked about every one of those stories as it happened.

Mike Papantonio:             Yeah, But God forbid, we should talk about, God forbid we should talk about Obama appointments because we’re not being tribal. Bad news is we’re not tribal. That, we call balls and strikes and that’s what we’re doing right here. Farron, one more point. You saw the article, we were able to settle the Roundup case with Monsanto and Bayer for $10 billion. Next week, we’re going to pick up with a story while we’re talking about court systems. We’re gonna pick up with a story about the ugliest bunch of class action predators maybe I’ve ever run into since the late nineties. It’s an interesting story about how they’re trying to destroy the rights completely take away the rights for people who were injured by Roundup in the future when they develop cancer. So we’ll pick up with that story next week.