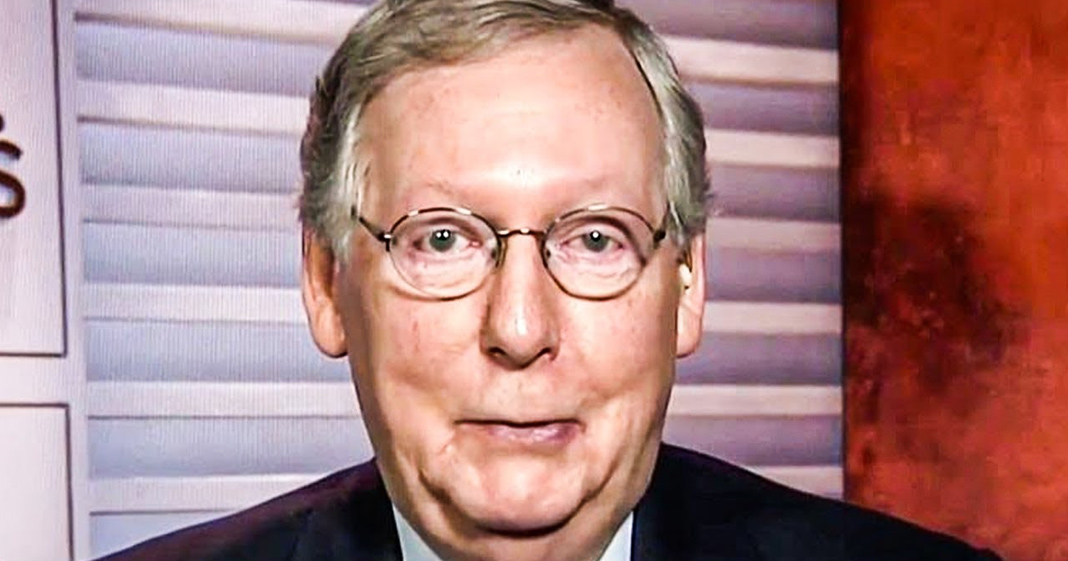 Republicans in the Senate have made it clear that when extra $600 per week in unemployment benefits expires at the end of this month, they are going to let it stay dead. The reason they are offering is because they think this is making it too lucrative for workers to just stay home and not work, meaning they think that Americans are inherently lazy and greedy. They had no problem writing billion dollar checks to bail out their donors, but they can’t stand the thought of taking care of average American workers, as Ring of Fire’s Farron Cousins explains.

Republicans in the Senate are ready to let the economy absolutely go down the toilet in order to stick it to those lazy greedy unemployed Americans, Mitch McConnell, Republican Senate leader decided this week that poor people in this country, unemployed people, people who’ve lost their job from the pandemic. You’re just too darn greedy. And so when those extra $600 per week in unemployment benefits, you’ve been receiving during the pandemic, when those expire at the end of July, they’re going to stay dead forever. And McConnell is joined by most of the other Republicans in the Senate and thinking that this extra $600 is going to go away. You’re never going to get it again. And again, it’s because they think unemployed people are simply lazy and greedy. That’s what Republicans think of you here is Mitch McConnell’s own words. This is what he thinks of people in the United States. Unemployment is extremely important. I’m sure it is. And we need to make sure for those who are not able to recover their jobs, unemployment is adequate,

Adequate. That is different From whether we ought to pay people a bonus, not to go back to work. And so I think that was a mistake and we’re hearing it all over the country that it’s, it’s made it harder to actually get people back to work, but to have the basic protections of unemployment insurance is extremely important and should be continued. But you know, God forbid these people get a little extra cash right now so that they can, I don’t know, maybe put some money in savings, maybe make some purchases that they’ve never been able to make. Let me tell you something here. I didn’t lose my job. Obviously during the pandemic, I also, by the way, work three different jobs, all freelancing, but I do lots of different jobs. I didn’t lose any of them. So I still kept my same income. I did get the full amount of the stimulus and I have four kids.

So I’ve got a pretty generous stimulus. Do you know what I did with it? For the first time in my life as a 37 year old, I bought furniture cause my wife and I have never actually been in a position where we’ve had several thousands of dollars available to spend on whatever the hell we want. And so we bought furniture. We bought a couch and a love seat and a chair for the first time in our married lives. I had never in my life purchased my own couch. Every couch I had owned. And from the time I moved out, hand me down from a relative who said, Hey, I got a couch. You can have.

So finally, Because that stimulus, I was able to actually do this. So I spent 100% of that money on furniture. And so that’s kind of the story here. That was the point of the money, right? Go out and help keep the economy of float. And if you’ve lost your job, this will help keep you afloat. You can use it to pay rent. You can pay your bills, why didn’t need it to pay for those things. So I got to do it on something I wanted for the people who’ve lost their jobs. It’s the same thing. Maybe they’re not spending it on things that they want, but maybe they are spending it on things they desperately need. Maybe the refrigerator, a cutout, and they have to go buy a new one. Well, those are very expensive these days. But with that extra $600 after a week or two, they would have been able to do it instead of having to put it on a credit card.

So they keep stimulating the economy with this extra money. They’re not sitting around planning, lavish vacations with it like Republicans would have you think. And they’re certainly not staying home because they are too lazy to go back to work because they’re living off uncle Sam’s teats. That’s not what’s happening. And if you’re concerned about the fact, cause a congressional report said, yeah, 83% of the people who lost their jobs, if they went back to those same jobs would still make more money off the unemployment benefits than they would if their jobs doesn’t that tell you more about pay here in the United States about the state of corporate America and how they abuse their workers. That to me is the story. Don’t get pissed at the workers, get pissed at the people, paying them crap, but Republicans will never do that because that would mean calling out their donors, calling out their corporate masters. Cause that’s what they are. They’re their corporate masters and they’ll never get mad at them. So they would rather insult 45 million newly unemployed Americans. They would rather insult them, call them lazy and greedy than to ever have to call out their corporate donors for not paying people enough money.