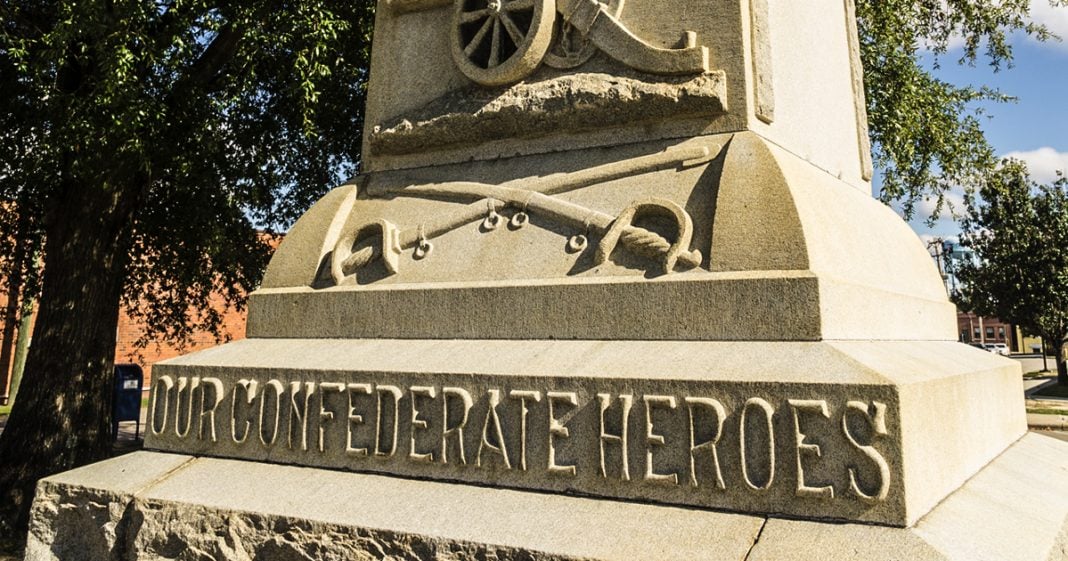 The city of Graham, North Carolina has banned protests in order to preserve a civil war statue that is displayed prominently outside the city’s courthouse. This means that the city has suspended the First Amendment in order to protect the rights of a symbol of racism and oppression in America. Ring of Fire’s Farron Cousins explains this disgusting action by the city and what it really means.

The town of Graham North Carolina this week decided that they don’t care about the constitution. They don’t care about the rights of American citizens. All they care about is protecting their racist, civil war participation, trophies Graham, North Carolina, this week, according to a report by ADA Chavez over at the intercept, decided to make protesting illegal because they were concerned about their little civil war monument that they have in front of the Graham, North Carolina courthouse. Now protesting is not, of course, a hundred percent illegal. You have to get a permit from the city, you know, and say, Hey, I want to have a March. I want to, you know, get a bunch of people and we’re going to go over here and we’re going to protest. And then the city said, Oh, by the way, we’re not going to grant. And he permits. Here’s what happened. I have to read this, uh, this paragraph from again, ADA Chavez over at the intercept.

That’s a phenomenal piece of work here. Thank you. It says the elements County Sheriff’s office said in a Facebook post on Friday that permits to protest in the city of Graham will not be ground granted for the foreseeable future. Adding that anyone who attempts to protest without a permit will be in violation of the order and arrested. There has been a heavy police presence around the monument, which features a statue of a Confederate soldier with a rifle located in downtown gram for several days. Now, Graham whose population is around 15,000, also declared a state of emergency and setting 9:00 PM curfew over the weekend, which was then canceled on Monday night. So it’s town of 15,000 people. They’ve got a little, you know, a Confederate soldier there with his rifle. Why? I think that’s the question we need to start asking a little more of why, why did you erect this statue? You know, I’m willing to bet most of these aren’t statutes that have just been sitting there for 150 years, right? These were most likely erected during segregation, if not after that, to prove a point, but here’s the bigger issue here. The town of Graham North Carolina has suspended first amendment freedoms in order to preserve their racism. That’s what happened. Suspended the constitution to protect racism.

The statute was unnecessary. Y’all lost the civil war. It’s over has been over for quite some time. Now you don’t need this. That’s why you don’t go around Germany and see statues of Hitler or other Nazi soldiers. They lost. And guess what? Contrary to the Republican point that a that’s erasing history by not having these statues. As I mentioned, the Germany thing, they don’t have of Hitler, but we all know who he was and what he did and why there are no statues of him. Same thing with the civil war. And I know Republicans love to argue the civil war. Wasn’t about slavery. You guys are the ones who seem to be erasing history there because yes, it was. That was the major catalyst of it. All statues are unnecessary, not just civil war statues for Confederate soldiers. Literally, no statues are necessary ever anywhere.

I’m sorry, but they’re not. Maybe we should stop putting so much stock in these fake idols that we put up all over this stupid country and start putting that money. And that effort into history books, into other textbooks for our kids, teach them that way, because I can promise you, there is no group of kids or young people anywhere in this country who are going to a statue to learn about history. Oh, they may see it for five seconds on a field trip or something, but I promise you it does nothing. Get rid of the statues. Move on. Their participation trophies for racist is what they are, but the city of Graham North Carolina would rather preserve their racist participation trophy than let people exercise their first amendment rights.