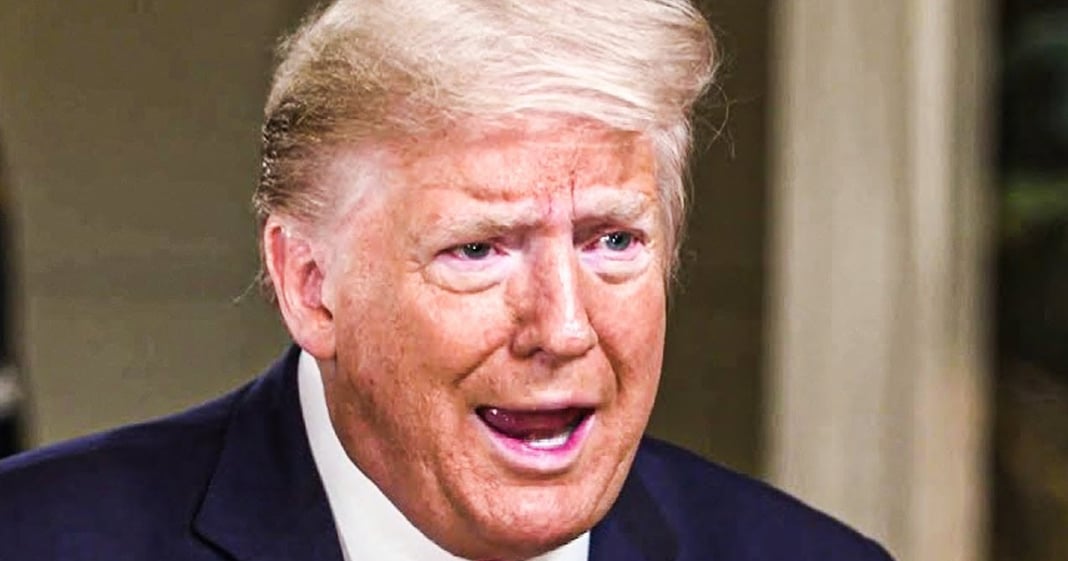 For the second time in a week, Donald Trump has failed the most basic part of running for public office:  Telling voters why they should support you. The President has been asked twice during softball interviews what his goals are for a second term (which is another way of asking why people should vote for you) and he failed to answer the questions both times. The President has no message, and it is starting to panic Republican insiders. Ring of Fire’s Farron Cousins discusses this.

In an interview this week with Eric Bolling, from Sinclair broadcasting, Donald Trump was once again, asked for the second time in one week, what he wanted to accomplish in a second term, essentially being asked, why should people give you a second term? What are you going to do? I mean, after all that is the basis of every single political campaign, regardless of the size of it. You know, whether you’re running for dog catcher or president, you have to be able to tell people what you want to accomplish in your term, or to put it another way, why people should vote for you. And for the second time in one week at a very soft ball interview setting with a right wing fanatic last week was Sean Hannity this week with Eric Bolling. Trump couldn’t answer the question. He could not give a straight answer as to what exactly he would accomplish in the second term. In fact, here’s what he told Eric Bolling. When he asked him a question, he said, we’re going to make America great. Again, we’re doing things that nobody could have done.

We’re just, we’re just going to keep making America great again. And they were just going to do it again and again and again and again, cause that’s, that’s the plan, you know, we’re just going to do things. People haven’t done make things great. Uh, you know, probably tackle some issues here and there and uh, while we’re at it, you know, makes things good. If not great. And then we’re going to keep it great. Cause that’s the plan. I mean, look as nonsensical as what I just said sounds that’s what the president is literally out there saying like, what are you going to do? You’ve had four years. What have you done? Well, we’ve, we’ve made America great. So what are you going to do in four more years? We’re going to keep it great. Dammit. That’s where he’s at. And as silly as this sounds, you know, listening and hearing him say this and mocking it, it’s actually pissed off the Republican party, both the incumbent Republicans in the Senate who were up for reelection as well as Republican donors are furious right now because Trump has no message.

He has nothing to say about either what he’s accomplished or what he wants to do in a second term. So he doesn’t know what he’s done in the first term. He doesn’t know what he’s going to do in the second term. He has no answers for anything and they’re freaking out because if he doesn’t have a message at the top of the ticket, it is going to affect every single person with an R next to their name, down that ballot enough to where the control of the Senate is up for grabs. At this point, it is no longer a lock for Republicans. And again, it always all flows from the top. When Trump has no message out there for the people, when he can’t even give a straight answer in this kind of softball interview, he’s in trouble. It’s not like he has exactly a ton of time left to craft a message.

Four months, four months from today is the election four months from today. He kind of has to have it. You can’t craft a campaign message, you know, in September, October and say, that’s what we’re going with. Most people have made up their minds by then. We will have gone through the debates by then assuming they even happen. You need a message. And that’s not just me telling you that that is your campaign telling you that that is Karl Rove telling you that that is your donors telling you that. And that is every single Republican who is shaking in their boots right now. Cause they could lose their Senate race telling you that. But the truth is folks. He doesn’t have a message because he doesn’t have a clue. It’s not because he’s unsure of what he wants to do. It’s because he doesn’t want to do anything. He wants to hold the title of being president of the United States. He doesn’t want to put in any of the work. And if you don’t believe me, then consider the fact that he has spent 25% of his administration on a property that he owns other than, you know, not being at the white house and not working. He wants the title. He wants the power. He just doesn’t want to have to put any effort into actually doing anything. And that is going to come back to bite every single Republican come November.