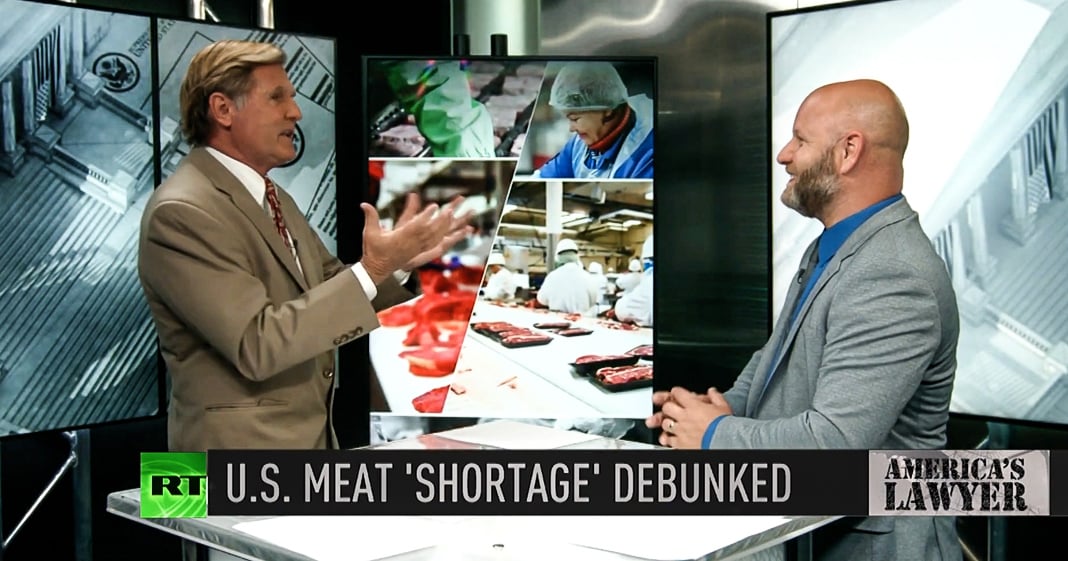 Via America’s Lawyer: A reported ‘shortage’ of fresh meat in the U.S. has since been debunked as an effort to lure meat workers back to their jobs while remaining competitive with Chinese farmers. Mike Papantonio & Farron Cousins discuss.

Mike Papantonio: According to new reports, there never actually was a meat shortage in the United States. The meat industry created, they made it up out of thin air and they did it so they could abuse workers and so they could continue making money. The biggest abuser, Smithfield who, oh, by the way, is owned by China. Who, oh, by the way, were shipping the meat to China and saying, well, we have a shortage here. No, there was no shortage.

Farron Cousins: This, this was one of the biggest stories of the last few months was the meat shortage. You know, even president Trump had to come out and issue an executive order, declaring them essential services, forcing these workers to get back into the meat processing plant, because stories all over the place said, we’re about to be out of meat. You’re not going to find meat in your grocery store, but it was all a lie. But, but it was a lie if fed by the meat industry because they wanted more meat. We had plenty for the US what they were running out of, or didn’t have enough of was enough to send overseas, to make even more money. And that’s why they forced these workers back. Hundreds and hundreds and hundreds of them developed COVID-19. Plenty of them died.

Farron Cousins: All so that the meat industry, Smithfield especially, could send more meat over to China.

Mike Papantonio: So, so create the lie, let the media tell the lie, like they get sucked into everything. Yeah. I mean, because they don’t ask questions anymore. They get sucked into everything. Give the white house a legitimate reason to say, we’re going to deregulate totally and let you subject these workers to COVID and they subject their family to COVID and have people dying from COVID. And keep them on the job so they can create more production, not for the United States, but for China, Smithfield is owned by China. All of this pork was going to China and it was a big lie. And now, well after the fact, oh my God, the media wakes up and says, maybe we should have looked at this a little closer. Right?

Farron Cousins: Well, and Smithfield has been one of the leaders in lobbying trying to get the government to enact immunity for them so that they can’t be sued, for getting their workers exposed to Coronavirus. But at this point now that we know they’re lying, they’re going to have to pay a lot more money to pay off, politicians.

Farron Cousins: Than they would have in the past.