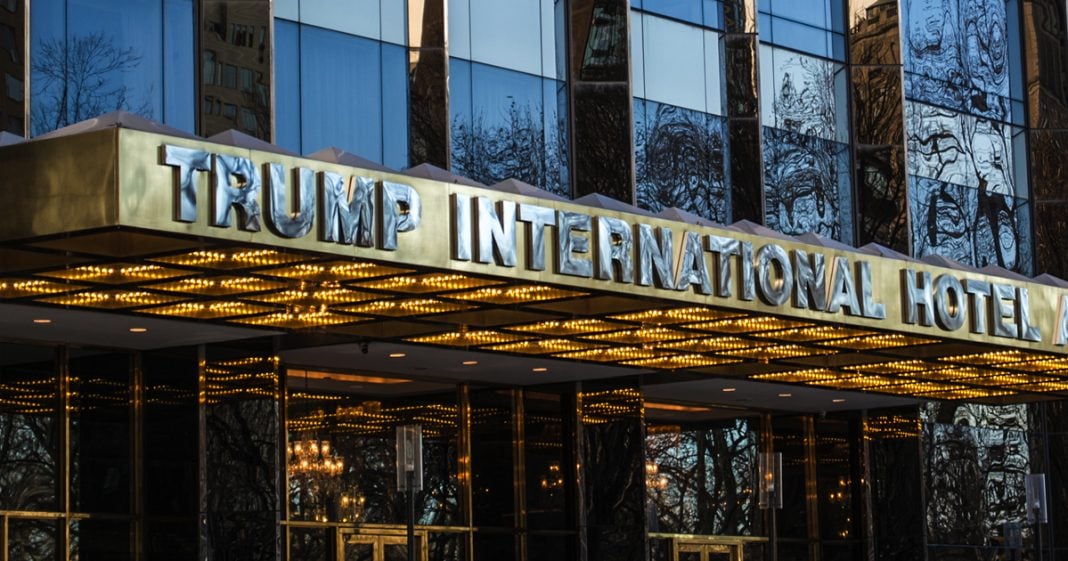 An undercover sting by Inside Edition has revealed that Trump International Hotel in Manhattan isn’t adhering to proper hygiene guidelines during the pandemic, and possibly any other time. The sting uncovered subpar cleaning for bedding, floors, pillows, and most everything else in a hotel room, which isn’t surprising considering how cheap Trump is. Ring of Fire’s Farron Cousins discusses this.

One of the things that health officials have been stressing to Americans during this pandemic is cleanliness. You don’t wash your hands, don’t touch your eyes, just make sure everything’s clean disinfected, wipe it down. And that of course goes double for businesses. You know, we have seen grocery stores, uh, enact these very stringent cleaning policies, disinfecting sanitizing, everything, hotels supposed to be doing the same thing. But unfortunately, the folks at a Trump international hotel in New York city did not apparently get the memo that we’re in the middle of a pandemic and they need to make sure they actually clean everything, especially the rooms in between each individual guest, according to a sting operation pulled off by inside edition. Trump international hotel in New York city, uh, was one of three hotels. They found that did a sub par job of cleaning their rooms, uh, between guests and subpar really is putting it very nicely.

I’ll read this. This is how the sting operation works. And this is what they found. Uh, inside edition correspondent would check into a room, then print the programs, logo on bedsheets, pillowcases, and towels using a washable spray that can only be seen under ultraviolet light. The correspondent would also use an invisible gel to handprint other surfaces as well as devices such as thermostats and remote controls. Uh, he would then make it appear as if someone had slept in the room leave then rebook the room under another name for the following night, Trump international, which overlooks central park and offers guests a personal protective equipment. Welcome kit, reportedly changed the bedsheets, but did not change the pillow cases and failed to wipe down the desk and remote. So it doesn’t do a whole heck of a lot of good to change out a bedsheet if you’re not also changing out a pillow case as that is where your face goes, but that is what happened at Trump international hotel. And here’s the thing. This is not just during the pandemic, by the way, I refuse to believe that the hotel got a little lax with their cleaning policies during a pandemic. It’s more likely that this is actually just how that hotel operates, you know, to save money, to save time for the cleaning staff. You go into the room, you wipe down any visible, uh, smudges or marks on surfaces.

You change the bedsheets and you will walk out, that’s it, you know. Do the little fold flap on the toilet paper and you’re good to go. You don’t have to worry about actually sanitizing the room, especially not during a pandemic because we all know that Donald Trump wants to save money. He wants to do things as fast and as efficient as possible, which means cutting corners. And that’s what we’re seeing at this hotel. And I am willing to bet if carried out this thing at other Trump properties, we would likely see the same thing happening after all. We have already talked about the numerous, uh, health code violations that we have seen at Mar-a-Lago, uh, that we have seen in Trump’s, uh, club up in, uh, New Jersey. This is kind of widespread. This is apparently the way this group does business. They could change. They absolutely could. And they should, maybe this was just a bad day. Maybe that one time, that one person on the cleaning crew who was assigned to that room, maybe they cut a couple corners and maybe it’s not indicative of the way Trump international hotel operates, but this sting, this kind of says that, yeah, this is what happened.

Although, uh, the hotel itself did say, after this came out, they looked into it themselves and they found absolutely no instances of wrongdoing, you know, kind of like we’ve seen all through throughout recently, like, Hey, we investigated ourselves and it turns out we’re perfect. Yeah. That’s a little hard to believe, but that is their story. And they’re absolutely sticking to it. In the meantime, if anybody does decide to check into a Trump owned hotel, I’d go ahead and bring some extra hand sanitizer, maybe put it in a spray bottle and just go ahead and douse the whole room before you touch anything. Certainly before you put your head on the pillow.