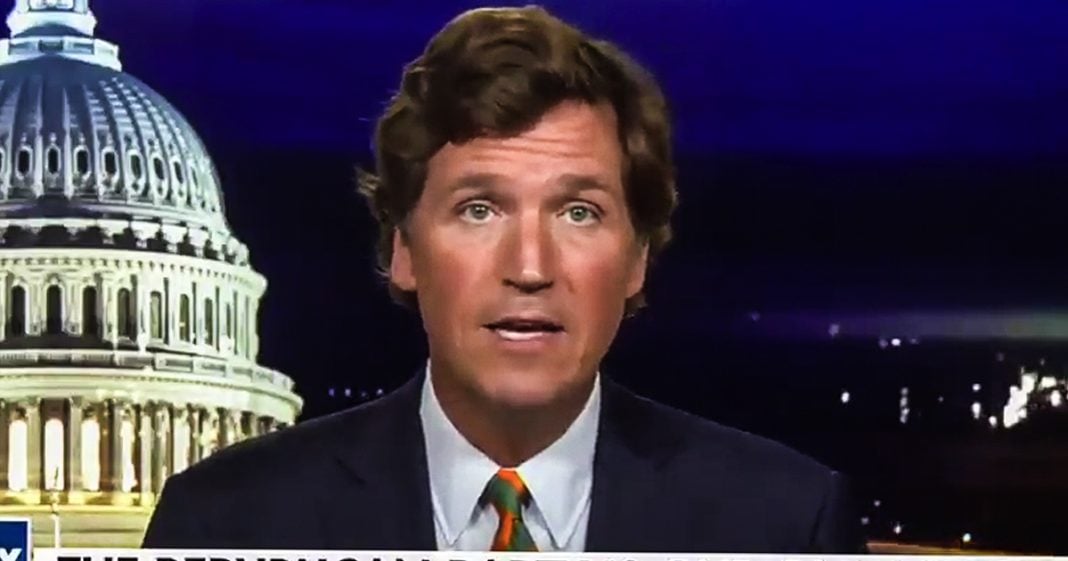 America is facing a mountain of problems right now, but Fox News host Tucker Carlson knows how to fix all of them and protect American citizens – just vote for more Republicans. Tucker is trying to use the economic, social, and civil unrest to stoke fear in his viewers and drive voters towards Republicans, but for the moment it doesn’t appear to be working. Ring of Fire’s Farron Cousins explains what’s happening.

It’s no secret that America is facing a lot of issues right now. Uh, some that we really couldn’t have predicted others that were entirely predictable for decades, but Tucker Carlson over at Fox news believes that he knows how to solve all of these problems and how to protect Americans. And the answer is actually quite simple. It’s been staring us in the face the whole time, according to Tucker, just vote for Republicans and all of this goes away. Here’s what Tucker had to say.

Tucker Carlson: But to remind the Republican party that it is our only shield. Yes, the Republican party flawed and infuriating though. It often is the fact remains. The GOP is the only institution still open to the rest of us, to Americans who want to live as they did just 15 years ago, quietly productively, without being harassed and harangued by self-righteous lunatics, who mean them harm. And they do. If you want to be left alone to do your job and raise your family in this country, you will need a protector. That protector must be the Republican party. There are no other options, but it must be a very different kind of Republican party. Keep in mind, we’re getting a new Republican party, no matter what happens. Even now, vultures wait just off stage to swoop in and claim the GOP for themselves. Once Donald Trump has gone.

Of course, why didn’t we think of that before folks, if we want to be safe, if we want to be protected all’s we got to knew his vote for some Republicans because Republicans totally kept America safe on a September 11, 2001, right? No bad things ever happened under Republicans. I mean, it’s not like our Republican controlled federal government right now is seeing us die during a pandemic, right? That’s not a thing that’s happening. Right? Tucker, all the good things that have happened in American history have happened under Republican leadership and all the bad things have happened under democratic leadership, right? No, no. That’s that’s no, no, but here’s the thing. What Tucker Carlson is doing right now is a redo of the 1968 Richard Nixon campaign, where Nixon in the middle of the civil rights movement, you know, civil unrest all over the place. He came out and said, elect me, I’m the candidate of law and order.

I’m going to return your lives to normal. I’m going to protect you. Average American citizen. You don’t want these mobs going into your neighborhoods, not do you. I’m the only one that can protect you from that. And Trump, to an extent has tried to do the same thing. He is not as articulate as Tucker Carlson, which is a very weird statement to make saying somebody is not as articulate as Tucker Carlson, but he’s not. And Tucker actually did a good job here of inciting that fear in his audience. The problem is it’s totally made up nothing. Carlson said there was based anywhere near reality, because think about what he said, um, uh, Americans who want to live just as they did 15 years ago, quietly productively without being harassed and harangued by self-righteous lunatics who mean them harm. And they do. If you want to be left alone to do your job and raise your family in this country, you will need a protector.

But here’s the problem, man. The Republican party doesn’t actually leave people alone. The Republican party is actually far more intrusive into people’s personal lives than the Democrats could ever hope to be. Because if you think that they just let people go about their lives and they don’t harass or harangue them, as you say, uh, then go try to get an abortion in a red state. Why don’t you try that? And you tell me if, uh, you get harassed or harangued. How about you try being a member of the LGBTQ community anywhere in the country right now, under Republican rule. And you’re going to tell me that Republicans just let people, you know, just go live your life. We’re not going to interfere. We’re not going to tell you how to do anything. That’s a lie. That is an absolute lie. And Tucker knows it. He knows that what he is selling his audience right now is complete fiction.

A lot of people in this country like fiction because fiction is better than reality. And if they continue to consume this fiction, we will never fix our reality. We will never get things the way that they need to be in this country. If we listen to people like Tucker Carlson, not just by taking his advice, but by living in this fantasy world, no one political party right now, by the way, has the answers for everything. No one political party that exists right now in the United States can be fully trusted at all. This is something that transcends politics. That’s what we’re seeing happen right now. It’s not left versus right. This is about humanity. Treating everyone as if they were equal, regardless of who they love, who they’re attracted to, what the color of their skin is, what God they worship or don’t worship. This is about everybody being on the same level playing field. And all we’re asking the government to do is just, Hey, look out for us. Don’t restrict me. Don’t tell me that I am different. And laws apply to me that do not apply to these people.

Well, just make sure I’m okay. Give me healthcare. Don’t let me lose my home because I had to go to the emergency room or because I needed an emergency surgery who helped me afford to go to college by not being saddled with 30 years of student loan debt helped me by not letting the planet burn down due to climate change. That’s what we want the government to do. We don’t want them telling us who we can or cannot marry, which bathrooms we can or cannot use. Those are fake issues created by Republicans to instill fear in the American people. That’s what it’s about. That’s what they want to do. And that’s what Tucker Carlson is trying to stoke before the 2020 election, because that is the only card that the Republicans have left.