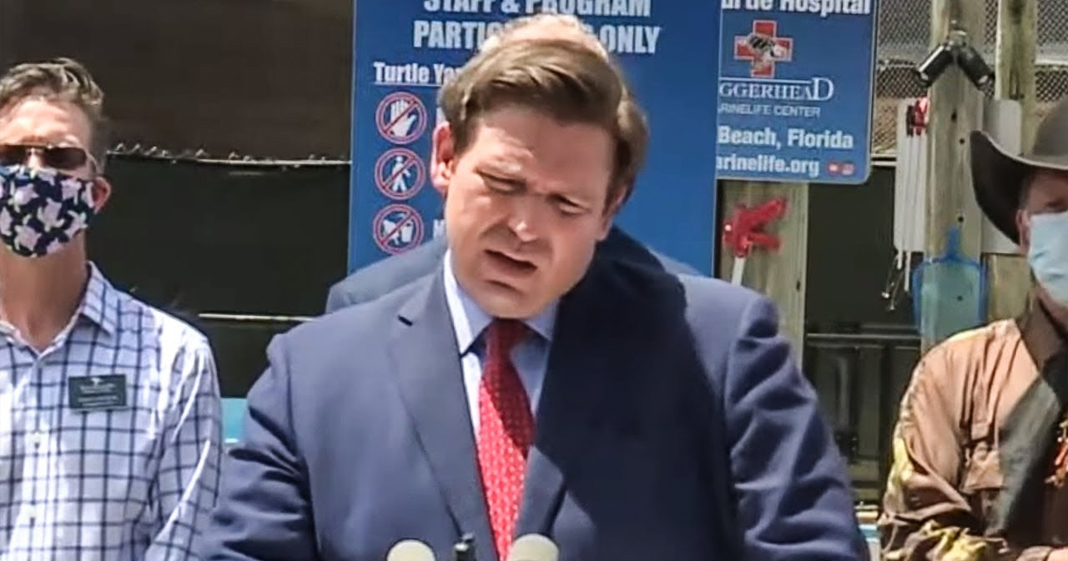 The state of Florida is getting hit hard with new Coronavirus cases every day, averaging more than 6,000 per day for the past 7 days. In spite of this news, the Trump-loving Republican governor of Florida – Ron DeSantis – made it clear this week that he is going to continue to reopen the state, regardless of the consequences because he believes that it would hurt the economy too much if he pulled back again. Maybe he should realize that hundreds of dead workers is also going to hurt the economy, as Ring of Fire’s Farron Cousins explains.

Florida is one of the three Republican controlled States right now, along with Texas and Arizona, that is seeing a massive surge in daily new COVID-19 cases. Uh, I am obviously resident of Florida. I’ve mentioned that frequently yesterday, we saw a little over 6,500 new cases, uh, just in the last day alone. And for the last seven days, we have been averaging over 6,000 new cases a day with, uh, this past Saturday, we had 9,500 new cases. In fact, almost 9,600 new cases. Things are getting bad here in the state. And there’s a reason for that. It’s because our Trump loving governor, Ron DeSantis, who has been in office a little under two years, but he ran on a platform of, I love Trump. Every one of his ads was about how much he just was in love with Donald Trump and his wife loves Trump and his two year old daughter at the time loved Trump. That’s all he talked about

Back in may after the state had only been shut down for maybe a month. He started forcing the reopening and he came up with the phases. We’re going to start reopening this. And the beaches were one of the first ones, cause Hey, that was coming up on tourist season had to have those beaches open, right? Cause we shut them down right after spring break and left them, uh, closed up until Memorial day weekend. So we could get all that beach money then reopen the gyms, the bars, the restaurants. And at that point, when we started reopening, we started getting the search, same thing with Texas, same thing with Arizona, pretty simple, you know, it’s easy to put those two pieces together. We were actually doing pretty well in total number of cases when we were all shut down and then we opened things in the cases go off that there is a correlation, there is a causation there, but he doesn’t see.

And he announced this week that he will in fact not be slowing down the reopening, even though Florida just had its worst week. So far of the pandemic, both in terms of total number of new cases and in total number of deaths from coronavirus who we ain’t slow and down to Santa says, because obviously the economy here in Florida is far more important than your life and your health and making Trump happy. Cause he’s coming here in August for the Republican convention, he’s doing his part from Jacksonville, Florida. We’ve got to, we’ve got to make it look like, Oh, everything’s normal, go eat at a restaurant, go, you know, go to a sports game, go to a bar or go to a gym. I don’t know, but just make it look normal for mr. Trump. That’s what these Santas is doing. He is risking our lives to make Trump happy. Here’s what he said to earlier this week. He said, we’re not going back closing things. I don’t think that that really is what’s driving it. I mean, people going to a business is not what’s driving it. I think when you see the younger folk, I think a lot of it is just more social interactions. So natural.

That’s a direct quote by the way, from Florida governor Ron DeSantis. It’s the younger kid. It’s the damn kids. You kids out there with your coronavirus and you get off my no that’s that’s, that’s not what it is. Idiot. Ron DeSantis is not an intelligent human being. When you watch his ad, you watch a speech as you understand that. And I hate to sound like Trump there to go ahead and salt his IQ. But I hate the man. He is an asshole and he is getting people in Florida killed. So I’m going to insult him and I’m not going to feel bad about it. Cause it’s all true. And those of us who’ve had to live with him for almost two straight years. We see how horrible he is and we see what he is doing here. He is getting people killed. He is allowing this virus to spread because he doesn’t want to disappoint Donald Trump.

Meanwhile, the County, uh, right next to me, a scampi County, which is actually where our main studio is located. Um, there’s three ICU beds left available in that entire County three because of the surgeon virus, uh, cases and Escambia County is getting hit pretty hard. And by the way, that’s also Matt Gates district, uh, where I’m sitting is also Matt Gates district here in Santa Rosa County. We’re running out of hospital beds too. So Matt, where you at, bud? What are you doing to fix any of this? The answer is nothing they’re pushing forward with reopening. They’re telling their own constituents. And I hope I pray that it kills them in the next election. I would love nothing more than to see these horrible decisions made by these Republican leaders. Come back to bite them at the polls and send them back to private life forever.

Never to run for office again, or at least never successfully run for office again because that’s what needs to happen. They are putting money over lives, profits over people and Trump’s appearance over their own constituents. That’s what’s happening in the state of Florida. At least Texas and Arizona have said, we’re going to slow down the re-openings. Maybe we’re going to close a couple more things, but not down here, not with Florida man running the state. No, we’re just going to push forward. Let people die because they think that’s, what’s going to make Trump happy and maybe it will, but it’s going to piss off your constituents and hopefully cost you your next election.