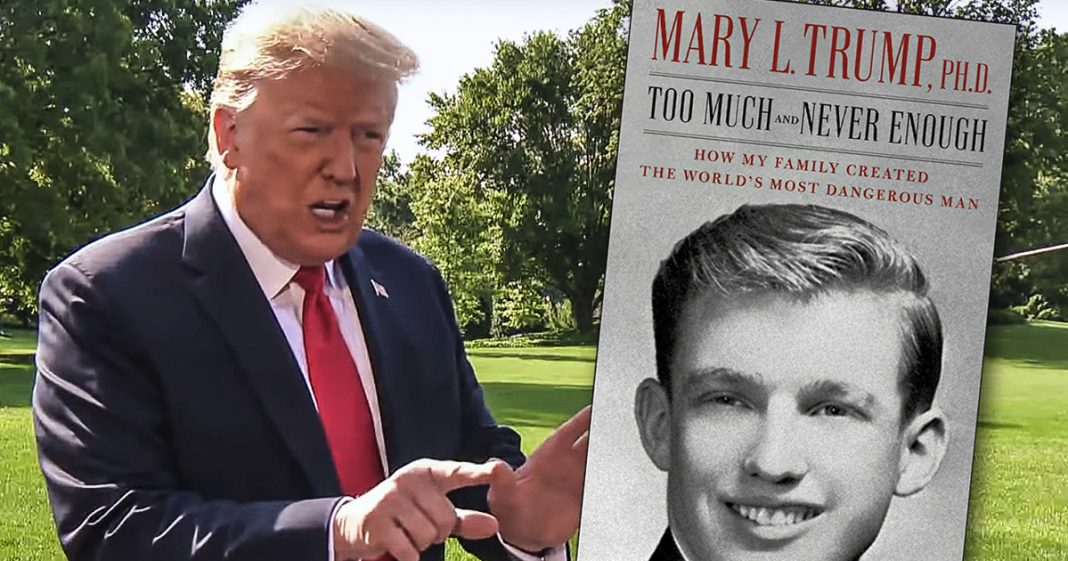 A judge in New York has lifted the restraining order that a judge had put on Mary Trump’s book earlier this week, a significant blow to all of the living Trump children who are about to be exposed. The current order only protects the book, not Mary herself, but he lawyer believes that the order against her will also be lifted soon. Ring of Fire’s Farron Cousins explains what’s happening.

On Tuesday of this week, uh, the Supreme court in New York actually issued an emergency injunction, or I guess restraining order against both Mary Trump, Donald Trump’s niece and Simon and Schuster, the publisher of Mary Trump’s book. Well then the appellate division of the New York Supreme court, the day after on Wednesday, yay said, yeah, you can’t put this restraining order in place against Simon and Schuster. The book’s publisher, they to have, they have no agreement whatsoever with any member of the Trump family. So how can you say that they’re also forbidden from publishing this tell all book, here’s the book backstory in case you’re not familiar with all the ins and out of this case. So far, obviously everybody at this point knows Mary Trump, Donald Trump’s niece is hang out a book, uh, that basically exposes all of the horribleness of the Trump family from the in side.

Uh, not yet necessarily any kind of criminal activity, uh, at least none that we know of yet, but just how horrible they are as people, uh, how bad they’ve been to one another, you know, the horrible things they’ve said and done. So really just to look at the personality, not necessarily the criminality of Donald Trump himself, well, last week as we reported Fred Trump jr. Actually, uh, came out of that, the hospital to file this lawsuit, to stop the book. Uh, and then he had to go right back to the hospital cause he’s still sick, but it was so important that he had to leave the hospital to start this book from being printed. And he said he did it. Or at least the court says he did it because back in early 2000, 2001 ish, uh, Mary Trump, along with other members of the Trump family signed a confidentiality agreement that was signed in order to settle the estate in the will of Fred Trump, senior court case last week said that, Hey, you can’t do that because one it’s that paperwork was signed and that estate was officially set up.

It was done. Nothing of that estate was binding anymore because the state no longer exists once it was given out therefore, or the confidentiality agreement itself cannot exist because the estate does not exist anymore. The Supreme court didn’t necessarily go with that ruling, but they did go, or these, the appellate court did that. Simon and Schuster didn’t sign any agreement with the Trump family. So you can’t bar them from printing the book. Now what’s interesting is that there actually is still a restraining order in place against Mary Trump now, but her lawyer has filed a motion to have that dismissed. He said, you know, you dismissed it against Simon and Schuster. We have this other argument of the estate no longer existing. Therefore the confidentiality agreement can not exist. So take it off of her. We’ll see where that goes. But what this means for right now is that Simon and Schuster can continue printing copies of the book, which is what they’re doing.

It’s coming out in late July, right before the Republican national convention in early August. So they want to get the copies printed out. They’re allowed to sell it. They’re not going to have to face any kind of liability from the Trump family for this Mary Trump on the other hand, as it stands right now, uh, pending any kind of appeal from her lawyer and the result of that, uh, she could technically be sued over what she says in the book. If she releases any information that was forbidden, uh, based on that confidentiality agreement right now, she could in fact be sued from it. Her lawyer’s already filed the motion. We’ll see what happens after that. But keep in mind too, that confidentiality agreement that she signed out to settle the estate of Fred Trump, sr, that did not forbid her from ever talking about anything with the family, just mostly things related to that particular settlement and a couple other issues.

So parts of her book may in fact be subjected to that a confidentiality agreement, but if she’s okay with being sued over it and losing profits from her book, maybe it’s not about the money. Maybe it’s about getting the story. Then she really has nothing to worry about. The thing I think we all need to be asking questions about is what the hell is the Trump family hiding, right? What secrets do they not want us to know that they know are in this book? That’s the bigger question. And whenever the family of the president of the United States fight so hard to keep something secret, you can bet there’s probably information in it that the American public definitely needs to know about.