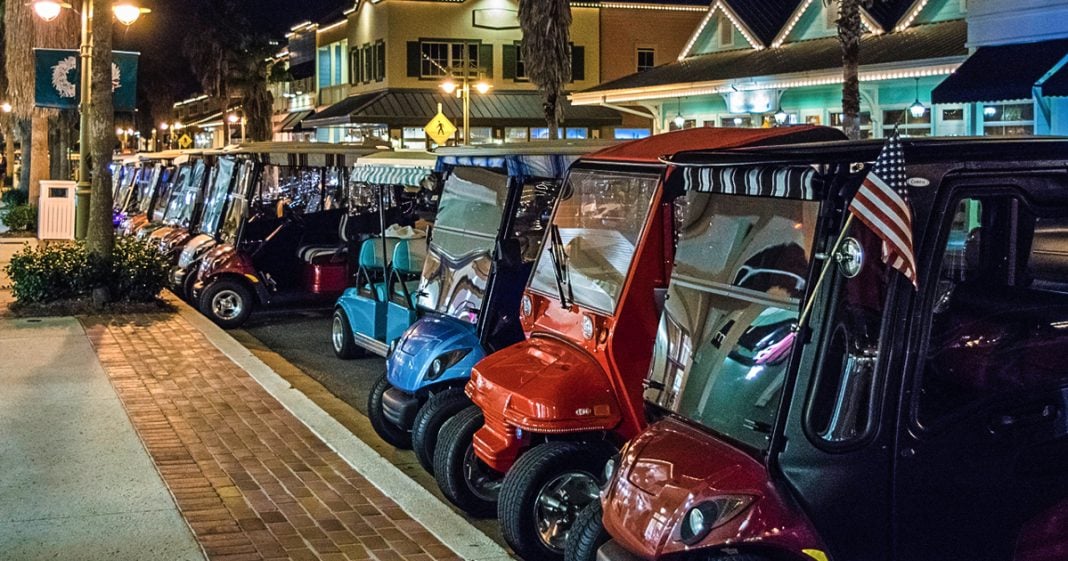 The situation in the Florida retirement community called The Villages is growing out of control, as the Trump-supporting seniors are trying to take on their Democratic counterparts in what reporters have referred to as a Civil War. Trump supporters have reportedly hatched plans to sabotage the golf carts of the anti-Trump Democrats in the community, and that’s just the beginning of this very weird saga. Ring of Fire’s Farron Cousins discusses this.

Apparently things at the villages, the posh retirement community down there in South Florida are getting a little out of control for the retired residents of that area. Obviously we saw this past weekend, the video clip of the democratic residents of the village, uh, protesting towards the Trump loving residents of the village. The Trump lover running by on his golf course and said a white power president retweeted that took him three hours to delete the tweet. But apparently that’s just the tip of the iceberg of what’s happening in the villages. And I’m sorry to laugh already, but this story is absolutely ridiculous. Um, as the daily beast has reported, apparently there’s a bit of a, a what they’re calling, I guess, a civil war taking place down there in the villages. Now don’t worry, nobody’s getting hurt. Uh, you know, nobody’s, uh, injuring each other, sending them to the hospital, but tensions.

There was a lot of Trump supporters out there yelling, uh, curses at them. But that’s about as intense as it got. And those kinds of exchanges have been going on for quite some time. Obviously we saw the video of the one this weekend, but that’s what it’s like there. Now, according to residents in the villages, you know, you, you, you pick your side and then you have to go and hate the other side. What’s funny about this is because these are retired individuals, right? Okay. They’re older, they’re affluent. The village is not a cheap place to live. It’s not a cheap place to buy into. So these are wealthy, elderly Americans acting like angry college students against their, their college rival team. That’s what this is like, because that’s what politics is for them. It is team sports because these folks have nothing to lose one way or the other really, they really truly don’t.

They’re retired. Okay. Their money is in those retirement accounts. Even if Democrats raised, it’s probably not going to affect them at all. Even if Republicans cut taxes, probably not going to affect them at all. So they have nothing to lose other than I prefer this party over this one. So they engage in these, you know, infantiles team sports types, mentalities, because regardless of who wins, it’s just a bragging rights for them. If they win it’s, you know, a little sad if they lose and then they just move on their life, doesn’t change these aren’t exactly people who have anything at stake in these elections. And that’s why this is infuriating. Yes. I applaud the Democrats down there for standing up to these Trump folks. They deserve to be yelled at and called out while driving by on their golf carts. But at the same time, they also don’t have anything to lose.

And that’s, what’s, what’s frustrating about this. Maybe, maybe they do. Maybe I don’t know their industry lives, but I’m betting kind of as a whole, we, we know what’s happening here. This has devolved into team sports. It’s tribal. It can’t be that way. They don’t care about the outcomes. They don’t care about the policies put forward by the next president. What they care about is did my team beat your team? Because if so, I get the brag for the next four years. If not, I have to listen to you brag for the next four years. It’s not team sports. It can’t ever be team sports. It can’t ever get to be that tribal. We can have the team that we love, absolutely Julie, but then you have to be able to put forward good policy that helps American citizens. Otherwise, as I said, it’s nothing more than team sports and tribalism, and that is insanely unhealthy for this country.