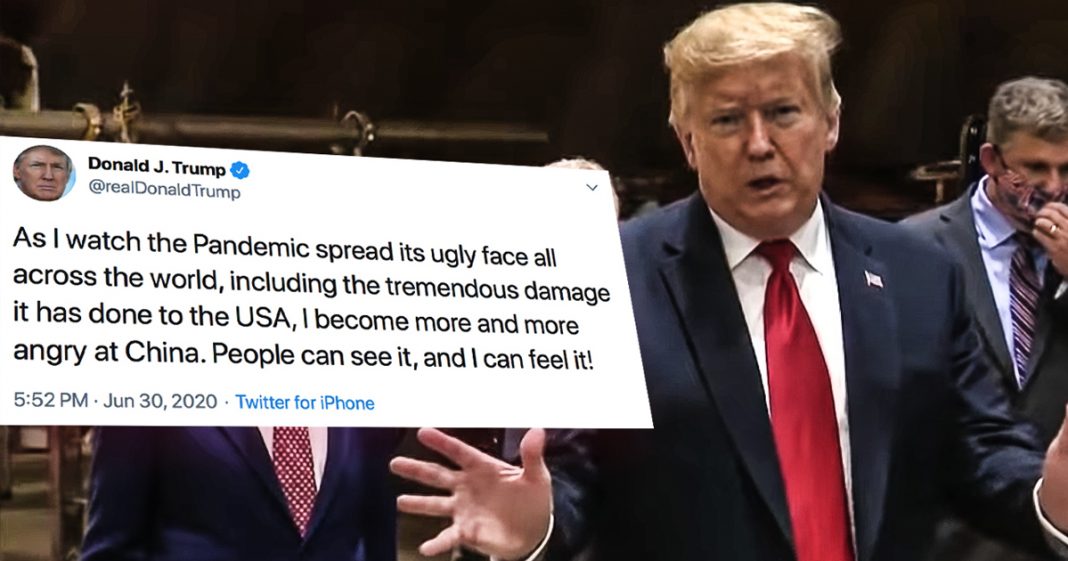 Donald Trump finally admitted that the pandemic is actually getting worse in the United States, but he did it in pure Trump fashion – by blaming the whole thing on someone else. He has reverted back to his talking points of the whole thing being China’s fault, but when you look at how other countries have responded versus what’s happening in the United States, there’s no evidence to support his gross claim. Ring of Fire’s Farron Cousins discusses this.

On Tuesday, Donald Trump appeared to finally admit that the pandemic here in the United States is in fact getting worse, but he did it in the most Trumpy and way possible by saying, hell yeah, things are getting bad. And let me tell you who to blame. And by the way, it’s not me. Here’s what Donald Trump said on Twitter. As I watched the pandemic spread its ugly face all across the world, including the tremendous damage it has done to the USA. I become more and more angry at China. People can see it and I can feel it. And there you have it folks. That is the message heading into the 2020 presidential election polls have already shown that Donald Trump is in fact losing support for his handling of the pandemic.

He knows that his internal polling is also telling him that. So what does he do? He doubles down on that. It’s not my fault folks. It’s China. I mean, hell. That’s where the virus came from. So why aren’t you all blaming them instead of blaming me? Well, cause there’s a reason. Sure. Everything starts somewhere. No matter what it is, it’s how you handle it. It’s how you respond to it. Right? You know, the butterfly effect your travels all around the globe. The thing is how you react to it, dude, you’re the leader. So it doesn’t matter what kind of diseases come and go across the planet or where they come from. What matters is what you do as an individual, as the leader, uh, to protect your people. And you’ve done nothing. You’ve done a piss poor job because you let that moron. Jared Kushner, uh, take over control of the response.

He doesn’t know what he’s doing. Nobody else knows what he is doing. You went out there and downplayed this thing far longer than anyone else. Even on Fox news, who by the way are now telling people it’s better to wear a mask, but Trump’s still refuse to take responsibility for it. He refused to do what was necessary. He refuse, refuse as to this day to lead by example, he won’t let anybody see him wearing a mask. And yeah, that’s part of the reason things have gotten so much worse in this country as compared to the other ones. Do you see the leaders over in Europe who are by the way, starting to go back to normal, cause they’ve beaten this thing. Do you see them going out there and blaming China for what happened to them? No, no other world leaders are sitting there saying, don’t China, we’re dying here and it’s your fault.

No they’re saying, Oh crap, we got a situation. Here’s what we’re going to do. You’re going to have to stay at home. We’re going to have to shut down the economy. If you have to go out, you have to wear a mask. But don’t worry about that. Our economy’s not going to collapse because we, the federal government are going to take care of you. We’re going to send you money every month. So you can still buy things. You can order them, have them come to your house. Businesses will still be able to operate if you’re wearing a mask because you’ll be buying stuff from them and they’ll bring it too. That’s what they did. And they turned out okay. And they beat it a hell of a lot faster than we did because we’re still seeing our case numbers go up 48,000 new cases yesterday.

And it is 100% Donald Trump’s fault because he is the leader of this country that has nothing to do with China. China didn’t do this earlier in the day on a Tuesday, Trump also tweeted out just the weird phrase, the lone warrior, the lone warrior. This was before his tweet, blaming China. I don’t exactly know what the lone warrior was. I don’t know what that’s about or why this man tweeted it out. But let me tell you something. You’re the leader of the United States right now. We don’t want you to be, you don’t want to be clearly, but you are. You’re not alone warrior. You’re the guy that everybody is, unfortunately, depending on to get things done, you want to be alone, lawyer a warrior, excuse me, go back to the business world. We’ll be more than happy to kick your ass out. But until then understand that you are not alone. You have the interests of 330 million Americans that you have to keep in mind with every single decision you make. And if you’re unwilling or unable to do that, which you clearly are both. Then I think it’s time you step aside and let somebody else with a little bit of courage and a lot of knowledge take over until the next election.