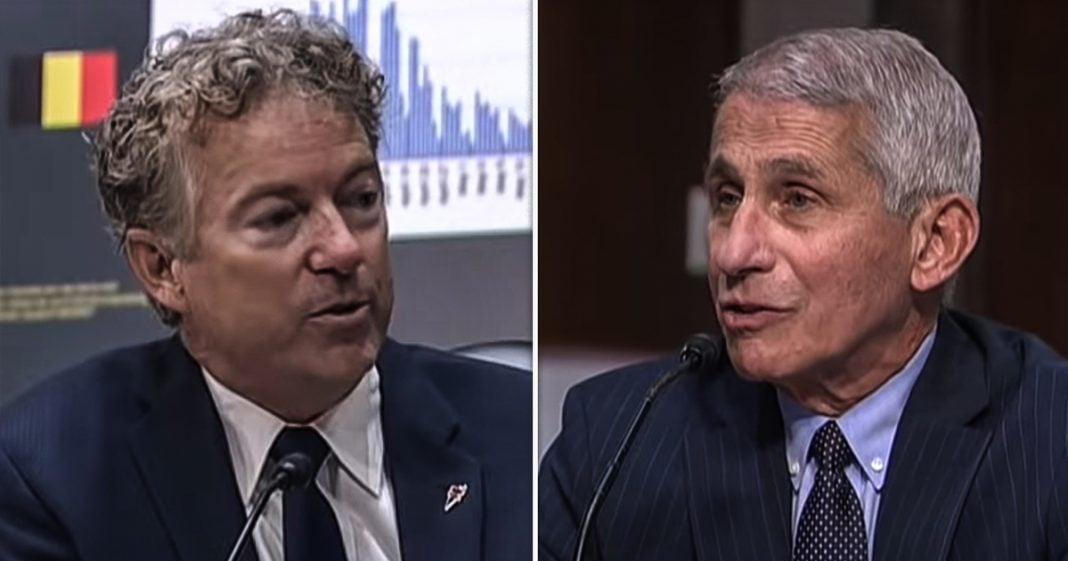 During a Senate hearing on Tuesday, Republican Rand Paul demanded that Dr. Anthony Fauci start giving the public something to be optimistic about during this pandemic, because Senator Paul says that he sees good news everywhere but nobody ever talks about it. The truth is that there isn’t much good news to celebrate right now, and Dr. Fauci can’t make things up just to appease the failing Republican Party. Ring of Fire’s Farron Cousins explains what’s happening.

Yesterday dr. Anthony Fauci, the nation’s leading infectious disease expert appeared in front of the Senate to testify. And to kind of clarify where we’re at right now with the pandemic and a Republican Senator, Rand Paul, a man who by the way, has been to medical school and was a practicing physician and eye doctor. Uh, for many years, wasn’t having it ran Paul, the civil libertarian, and one of the dumbest members of the United States Senate just wasn’t happy with what Fauci she had to say. And he’s damn sure, not happy about the fact that we here in the United States are apparently putting a little too much faith into doctors and scientists right now. And I wish I was making that up. I wish that were an exaggeration, but it is in fact what Rand Paul said during his disgusting, uh, unintelligible rant where he, I guess, was asking Fauci a couple of questions.

Um, the link in the description of this video, by the way, you can watch the interaction between Rand Paul. I didn’t want to have to subject people to that. So I’m going to read a couple of quotes from Rand, Paul. And again, you can watch the full exchange if you want. It’s it’s horrendous, ran. Paul’s crazy. He is absolutely crazy. I see where his neighbor was coming from here is some of the quotes from Rand, Paul. We just need more optimism. There is good news out there and we’re not getting it. We need to not be so presumptuous that we know everything. When are we going to tell the people the truth that it’s okay to bring our kids to school? We’ll tell them that truth. Rand, when it is actually true, cause guess what? Right now it’s not. Um, and it’s partially not because idiots like you are out there whining about, Oh, my civil rights are being violated. Cause I’m being told to wear a mask. Oh, I pretend to be a tough guy Republican. But when I have to put something over my face, if I pretend like I can’t breathe and I’m going to cry, that’s what you and your followers are doing right now across the country. And what’s even more hilarious is I was just on Twitter. Uh, reading about this, looking at what conservatives are, retweeting and conservatives are out there. You know, I think a gateway pundit, big league politics, running headlines, like ran Paul slams, dr. Anthony Fauci

Bull. Fauci, By the way, getting a couple of good zingers at Rand Paul and ran Paul in no way slammed dr. Fauci. I don’t know how ran Paul managed to get a medical degree. I, I truly don’t like I would like to see those transcripts. I want to know how that happened because that man is not intelligent at all. There’s something wrong with Rand, Paul, very clearly wrong with this man. Either that, or he is just so biased that he is able to convince himself, which would also probably be some kind of, you know, mental problem. That what he’s saying is true. There is no good news to go around right now. There is no optimism to go around right now and yeah, we all love it, but you can’t demand that Fauci. Sit there and tell you good news. Tell you something to be optimistic about when such optimism can’t exist right now because of people like you. People like Donald Trump, the folks at Fox news who downplayed this up until about three days ago,

Yo, If everyone had taken this seriously, if the president back in April had led by example, if he issued some kind of order saying everybody has to wear a mask. If Congress, the house and the Senate had gotten together and said, we’re going to take care of American people and small businesses, $2,000 a month until this thing is over, they wouldn’t have to go back to work yet. We could make it okay for them to stay home a national rent moratorium, mortgage moratorium, so that they didn’t lose their homes in the middle of a pandemic. Things like that could have solved the problems. We’d be more optimistic, but instead Rand, you and your ILC and the Senate are about to, uh, let the extra $600 per week in unemployment benefits expire because you people say that it’s, it’s more incentivizing for people to not work. People just want to be lazy. They’re inherently pieces of shit, right? Rand Paul. That’s what you think about human beings or at least American citizens. They are inherently lazy pieces of shit. That’s what you think. That’s what Republicans think. And if you support Republicans, then that is the kind of thinking that your vote is supporting.