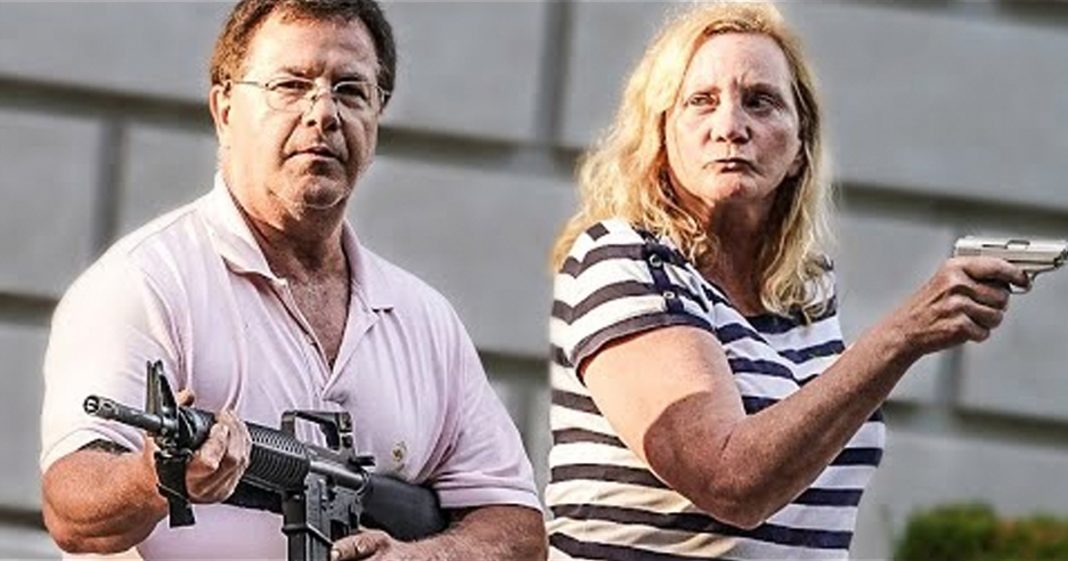 The lawyer and his wife who have now become internet famous in the worst way possible believe that they didn’t do anything wrong, and insist that their actions had nothing to do with race. In fact, Mark McCloskey says that he and his wife were actually the victims in this situation and he told CNN that they were “assaulted”, even though no assault took place. Ring of Fire’s Farron Cousins discusses this the disgusting actions of these two elitists.

Now you may not recognize the names Mark and Patricia McCloskey, but by now you have definitely, if you spend any time on social media, you have definitely seen their pictures because Mark and Patricia McCloskey are the two individuals in st. Louis who brandished guns outside of their five story. Marble home as protestors came marching by on their way to the st. Louis mayor’s house to tell her to resign. Now McCloskey Mark and his wife, Patricia were out there at least Mark, you know, was just holding his gun. Patricia, on the other hand, had her finger on the trigger gun pointed at the protestors and the pictures are all over. We can see this clear as day. Well there, uh, Mark himself, by the way, as a trial lawyer and a true trial lawyer fashion, he wanted to explain himself and, and defend his case. And he has every right to do it.

Unfortunately, his defense of the case of the facts on hand, uh, was absolutely pathetic. Uh, McCloskey has been making the rounds on the media sometimes with his attorney, by the way, but he told CNNs Chris Cuomo last night, the following, he said, I was a victim of a mob that came through the gate. I didn’t care what color they were. I didn’t care what their motivation was. I was frightened. I was assaulted and I was in imminent fear that they would run me over. Kill me, burn my house. Fear. I was always afraid. I was terrified. I’m the victim here? Mark McCloskey says again, Mark McCloskey was the one brandishing a weapon. His wife was the one pointing a weapon with her finger on the trigger at these people, those people from the footage we have seen from the pictures we have seen, they did not knock down any Gates.

They were not pointing weapons at the McCloskey. They were not threatening to come up there and run him over or kill him or burn his house. There is no evidence to back any of that up and being a lawyer, you wouldn’t think McCloskey would know that you can’t make a claim without the evidence to back it up. But that is exactly what he did. There is nothing, nothing available to back up. A single thing that Mark McCloskey said during that interview, we’re the victims we were assaulted. No, you weren’t. All it took was one misstep from your mustard, stain covered wife, and then you’d had real problems on your hand. She was out there with her finger on the trigger and the gun pointed at innocent human beings, innocent American, who were exercising their first amendment rights. They were the ones who acted lawfully. Now I understand you have a second amendment, right?

To own that gun. Sure. That does not give you the right to point it at individuals. See, that’s crossing a line. That’s when it becomes a credible threat of violence. And that is what you and your wife in fact were doing. And you know it, and that’s why you get to make the rounds on TV. That’s why you get to step outside the comfort of your five story marble, home, and go out there and say that I’m the victim. Oh, poor pitiful me. I’m just trying to protect myself and my family. He went on, he went on to say, I’m not the face of anything. Opposing the black lives matter movement. Uh, I was a person scared for my life who was protecting my wife, my home, my heart, my livelihood that goes on to sash man, 32 years, fixing up that to five story marble home.

I, Hey, he’s making the argument like you supposed to write. Like I was scared. So scared that I ran for my gun, that I knew I’d need one day, because I’m a fearful individual, which is why I have it to begin with. I live in constant fear, his lawyer, by the way, cause McCloskey has had to go out and hire himself. A lawyer. His lawyer had this to say, he said, my clients as melanin deficient human beings are completely respectful of the message. Black lives matter needs to get out, especially to whites. What the hell does that mean McCloskey? I would go out and hire another lawyer. If I were you. If this is the kind of drivel that he puts out, like, that’s his statement? Well, they’re just melanin deficient and they respect black lives matter as melanin deficient, individual, Holy hell. You just lost your case, do better.

But here’s the thing we have been told over the past few weeks that black lives matter is dangerous. They’re deadly. They have no respect for law and order. They’d been saying the same thing about an Antifa for, for years. They’re, they’re violent. They’re angry because they’ve gone up and punched a couple of neo-Nazis in the head. They’ve thrown some milkshakes, the real people we should be scared of, or the white people with the guns. That’s what we should be afraid of. That woman could have easily killed anyone in that crowd. And then she would have been bumrushed by every single person in that crowd. And it wouldn’t matter how many bullets she or her husband had at that point. They wouldn’t have been able to stop it. And they would have been ripped to shreds. We need to be afraid of the white people with the guns, the wealthy elite, the powerful, and as Mark McCloskey said right there, by the way like, Oh, I was terrified.

I didn’t, they were going to come do this. I didn’t care what color they were. I believe him on that. I believe that he didn’t care what color these people were. But what terrified him was that he has been living this sheltered bubbled life for so long. He was afraid of losing that bubble. He was afraid of having to answer to the masses. That is what that is, what terrifies him. That is what terrifies the elite. And that is why they go out and buy these weapons of war. That Mark McCloskey was brandishing. It, those protestors, not because they’re fearful of a tyrannical government, but they’re fearful that one day, the American public, the people they have screwed over along the way to their wealth and success. That one day those people are going to rise up against them. That’s why they have those weapons of war. That’s why McCloskey and his wife were out there on their front lawn. And that is why they were scared to death.