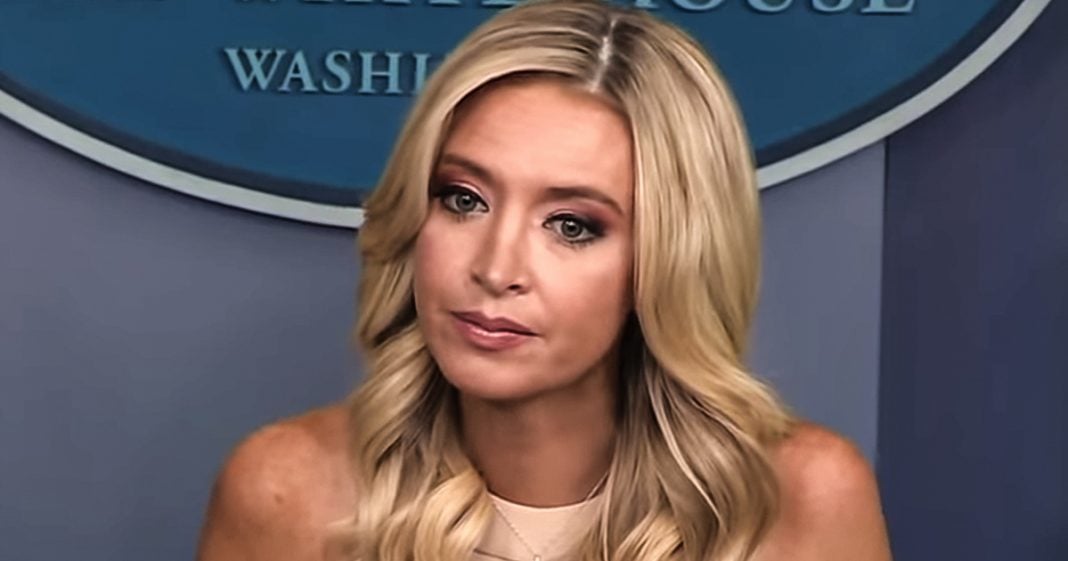 All of Trump’s press secretaries have earned a reputation of being completely dishonest with the press, but Kayleigh McEnany may have just told the biggest lie that we’ve seen from any of his secretaries. On Tuesday, McEnany said that Trump was actually the “most informed person on earth” when it comes to knowing about threats against America, and the Internet was quick to fire back at this painfully ignorant comment. Ring of Fire’s Farron Cousins discusses this.

Yesterday, white house, press secretary, Kayleigh McEnany proved that just because she hasn’t been on the job, maybe as long as some of the other press secretaries Donald Trump has had, she is still able and willing to tell just as stupid of lies as the people that came before her and the lie that she told yesterday was in response to reports that a Trump knew Russia had offered bounties, uh, for the heads of us soldiers over in Afghanistan, allegedly. Uh, and he did nothing about it cause he didn’t read the briefing is what the reports say. And Kayleigh McEnany told reporters during the press briefing to you all relax. Okay. Because Trump reads everything. Here’s the exact quote. Let me just, I don’t want to, I don’t want to put words in her mouth. Let’s let’s read her quote here. The president does read and he also consumes intelligence verbally. This president I’ll tell you is the most informed person on the planet earth when it comes to the threats that we face the most informed person on planet earth, because he consumes intelligence verbally.

Mmm. You can’t consume it verbally. I think you mean auditorily. So let me just clear that up through the ear, not through the mouth or through the words, any who that’s not the important part. The important part is the fact that you said he is the most informed person on planet earth when it comes to the threat that Americans face and immediately social media rightfully jumped all over Kayleigh here because that is quite possibly the dumbest thing we have heard from any press secretary Donald Trump has ever had. And that is not a short list. Considering the man hasn’t served a full four years, here’s just a few of the responses. Uh, the things people were saying on social media about her claim of Trump being the most informed person on planet earth. Uh, one person called her the minister of propaganda, which is a little bit more fitting for what she does.

Um, another actually a bunch of different people said some form of, you know, her pledge to not lie to us was just gaslighting. Uh, we have 129,000 pieces of evidence that say otherwise. Now that was a very poignant, uh, tweet referring to the number of people in the United States who have died from COVID-19 because contradictory to what, uh, Kayleigh McEnany says, Donald Trump is not the most informed person about the threats facing citizens of the United States, 129,000 of them. So far as of right now have died. Cause he didn’t take threats. Seriously, Kayleigh, that’s a thing that’s actually going on right now. And you expect us to believe that this man is somehow informed or that reads or consumes intelligence verbally nother. One says the only way Trump would consume intelligence is if his staff told him it was Haagen, DAAs will crack at Trump’s weight there and his, you know, a love of food.

But nevertheless, the thing is Donald Trump is in fact not the most informed person out there. I don’t know who the most informed person out there is, but Trump should be the most informed. Let’s be very clear about that. He is the president. He should know every single threat that the United States is facing. And if he can’t remember him, then his staff should be right there around him to remind him of it every single day. Oh, they do that actually with the daily intelligence briefings. So why is it he’s not able to take these things seriously. Kayleigh, why do, why do we have 129,000 dead Americans from this pandemic? We have 25% of the world’s dad dead from the pandemic. And I know you weren’t referring to the pandemic in this thing, but I think that’s the more poignant, a pressing issue at the moment, right? Why wasn’t he the most informed? Why has he been lying to us since day one? Those are questions you need to answer. But knowing that your job truly is to be the minister of propaganda. You never will.