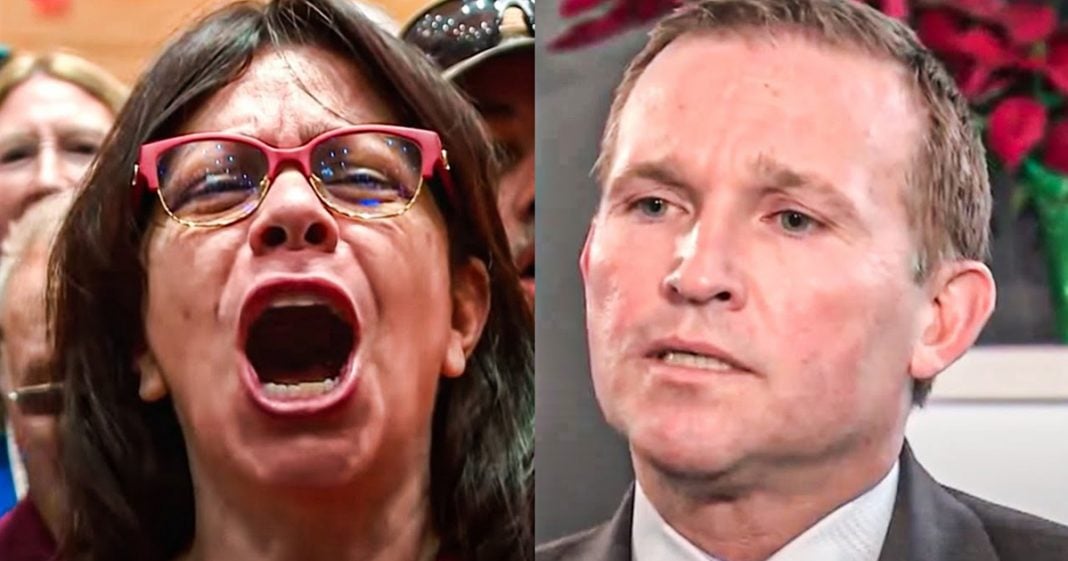 The Republican mayor of Jacksonville, Florida instituted a citywide face mask requirement on Monday, and the Trump-loving population of the city refused to allow this kind of oppression. They openly revolted on social media, letting their Republican leader know that he has apparently lost his mind because of his sudden concern for human health and safety. Ring of Fire’s Farron Cousins discusses this.

On Monday, Jacksonville Florida’s Republican mayor. Lenny Curry announced that starting at 5:00 PM on Monday, it would be mandatory for anyone going out into a public area or into a public building to wear a face mask. Uh, Lenny is following in the footsteps of many other, uh, mayors throughout the state of Florida. A lot of them Republicans, by the way, including the one here in my area, uh, who over the last few days have also issued these mandatory mask, uh, orders. And all it is is if you’re going into a public place, a grocery show, a store or retail center, if you’re going into a public park and there’s lots of people, there were enough people there to where you can not socially distance, then you have to wear the mask. That’s it. They, you know, end of story, where the mask move on with your life and for the most part in other areas of the state, uh, you know, the mask orders have been met by people who are just straight up.

I’m not going to do it, whatever. And people who say, okay, I guess I need to do this. But in Jacksonville, those people who, this is a big Trump area, by the way. And then this is why Trump chose this area to go give his, uh, his part of the Republican speech, acceptance speech for the RNC coming up in August. This is a Trump loving area. And the Trump lovers over there in Jacksonville, we’re not happy that their Republican controlled, uh, city suddenly took away their freedoms and said, you got to wear a mask. This was outrageous. The people of Jacksonville, all of whom are white, by the way, not all of Jacksonville is white, but all the people freaking out are white and they took to Twitter. And I got to read you. Some of these. These are absolutely outrageous. The response from these Trump supporters in Jacksonville to being told you need to wear a mask.

If you go out in public, the first one is from at Lauren Curnow, who says at Lenny Curry, what the literal crap, mandatory to wear a mask. Please tell me how working out at the gym is going to go for you when you have to cut off fully breathing, because you can’t breathe through a mask, right? It absolutely obstructs it. Yeah, certainly not as much as a police officer, uh, kneeling on your neck, right? Another one from at Jack’s beach lady, I’m sorry at Lenny curve Curry, but until all the protesters get off our streets that are spreading this virus like crazy. We will not be wearing masks in the heat of late August. You people are crazy. This is just a way to silence us, wake up plea.

You can speak through a mask folks. You’re not being silenced. And if you like at Jack’s beach lady, if you’re literally admitting that, Hey, people are spreading the virus like crazy around here, why should I wear a mask? Literally, why you should wear a mask? If it were happening the way you say it is, except for the fact that a lot of protesters all over the country are actually wearing masks, you know, until the cops confiscate them, which has also been happening this one from, at resident of FL, this is why the GOP will be in trouble in November limp, Dick Republican, mayor of Jacksonville, Florida at Lenny Curry, caved, and now face mass will be required for indoor and outdoor activities. Effective 5:00 PM. Today at governor Ron DeSantis had better step in quickly and stop this bullshit. But, uh, at resident of Florida, who’s totally not done.

He was still mad about it. Came back, added a second tweet. And the second tweet said at city of jacks and fuck you to dumb asses. I refuse to wear a face mask. These are real people, by the way, these are actual Trump supporting accounts on Twitter. And that’s not even all of it. I gotta do one more here. This is from, at Cassie green or at Cassie green Whitey as her username at Lenny Curry. This is bullshit. That’s, you’re requiring Jacksonville to wear masks. I refuse to wear one. You’re going to have a real issue with people not wearing mass. I’m not a fucking sheet. No, but you’re a fucking idiot as is everybody else whose tweets I just read. And there’s even more than that folks. I don’t understand what these people don’t understand. Just wear the mask, just wear mask. That’s it.

That’s all we’re asking you to do is just put a tiny piece of fabric or a tiny piece of, you know, uh, the, the, the paper of the paper masks. Just put it over your nose and mouth. When you go out in public, how is that so hard? How has that in, in, in, in fringing, on your constitutional rights, it’s not, by the way you folks are crazy. You’re absolutely clinically diagnosis. Really not. So now I know that’s not the scientific term or the medical term for it, but that’s the term I’m going to use because that’s what you are. If you’re not willing to just put a mask on your face to go out and pick up a couple of groceries, you’re freaking out about this as if they said we have to take your hand, like literally cut your hand off. No, they’re not taking a part of your body away from you. They’re not taking away your autonomy. They’re not taking away your constitutional rights. All they’re saying is that, Hey, we’re an unprecedented times in the middle of a pandemic that is really getting worse, especially here in Florida. So maybe for a couple of hours out of your life, don’t be a fricking dumb ass, but that is apparently too big of a request for these Trump supporters.