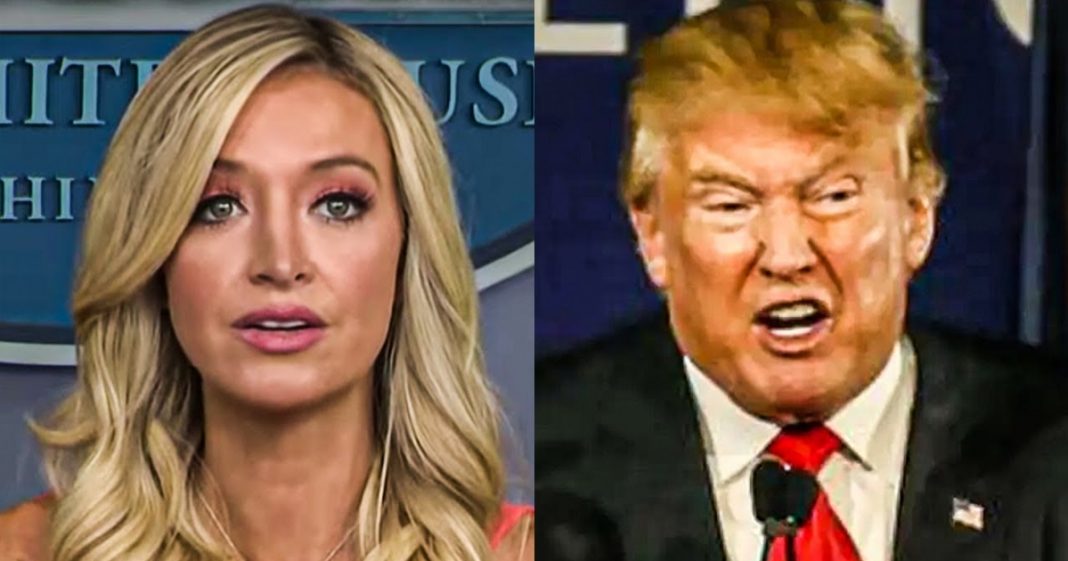 White House Press Secretary Kayleigh McEnany accidentally made things so much worse for Donald Trump on Monday when she said that he only shared the “white power” video in order to show that he stands with his “demonized supporters.” There’s a reason people like the man in the video are demonized, Kayleigh, and not many people disagree with demonizing bigots. Ring of Fire’s Farron Cousins discusses this.

On Monday white house press secretary, Kayleigh McEnany decided to go on Fox and friends and try to clear the air a little bit about Donald. Trump’s a retweet of the guy from the villages down in South Florida, screaming white power at those protesters. And as she usually does as did her predecessors Kayleigh McEnany came along, it just made the whole thing so much worse in such a spectacular way. You see, rather than saying the president didn’t know, this thing was there and he was shocked when he found it and he condemns this kind of speech. She said, well, he didn’t know it was there, but he wanted to show that he supports his supporters who are all too often demonized. Here’s her exact quote. She said the president did not hear that phrase in that portion of the video.

And when it was SIG signaled to him, uh, that this was in there. He took that tweet down, but he made very clear to me that he stands with the people of the villages are great seniors, men and women in the villages who support this president. He stands for them. And his point in tweeting out that video was to stand with his supporters who are oftentimes demonized. Would she, who could imagine that? Why, why would poor Trump supporters? Like the man in that video would be demonized maybe cause the riding around on their golf cart, screaming white power at people who were just trying to raise awareness about racial issues. That that seems to me to actually be a pretty good reason to demonize someone. You can’t demonize someone who is already a demon that would be applying a trait to someone who already has that trait.

You don’t need to do that. They’ve done it themselves, which is what the man in the video did, Kayleigh. That’s what happened there. But here’s the biggest issue. And this is why I say that she made things so much worse. She didn’t condemn it. Trump didn’t condemn it. In fact, not a single person. As of me sitting here talking to you from the white house has condemned this video. None of them, not one, that’s the shocking part, but what’s getting to the point of being just comically hilarious at this point are the defenses we’re starting to hear from everybody. Kayleigh McEnany is one of them. Ah, here’s Ben Shapiro. I have to play this. I’m not gonna make you watch him, but I am gonna make you listen to him. And that’s the annoying part. So here he is

Reared its ugly head yesterday again, when president Trump decided to retweet a video and it’s made national news, because again, it is reflective of a narrative at the left we’d like to push, which is the president. Trump is a white supremacist. Now I think what actually happened here is the same thing that happens to a lot of people on Twitter. When you are bored, you just start retreating things. And when you retweet things, you don’t always watch the video all the way to the end. And president Trump has, we know has the attention span of an app, right? The, the, the presidents of the United States. I mean, he literally will not read presidential briefings that are put on his desk. They have to send the form and then he doesn’t even rebuild. So I’ll last for those to be short. Okay. The man is not famous for sitting there and reading tomes of Winston Churchill. And so when it comes to watching videos online, my guess is you saw a person driving past with a trumps

Also. That’s what happened according to fast talking Ben Shapiro, it was just Trump being stupid. Stupid’s not in a good excuse, Ben. That’s a that’s, that’s not where we’re going here. So you would rather, that’s the thing like you would rather admit that, Hey, maybe he’s a little bit racist. Uh, you don’t want to do that. So instead you’re going to be like, no, he’s just, don’t the guy, can’t take the time to do this because he’s not smart enough to know that bad things can happen in videos. They would legitimately Ben uh, Kayleigh McEnany. They would rather have Americans think that their president is stupid instead of understanding that he is a racist that’s what’s happening right now, the man’s either comically stupid or dangerously bigoted, or most likely a disgusting combination of both of those traits.