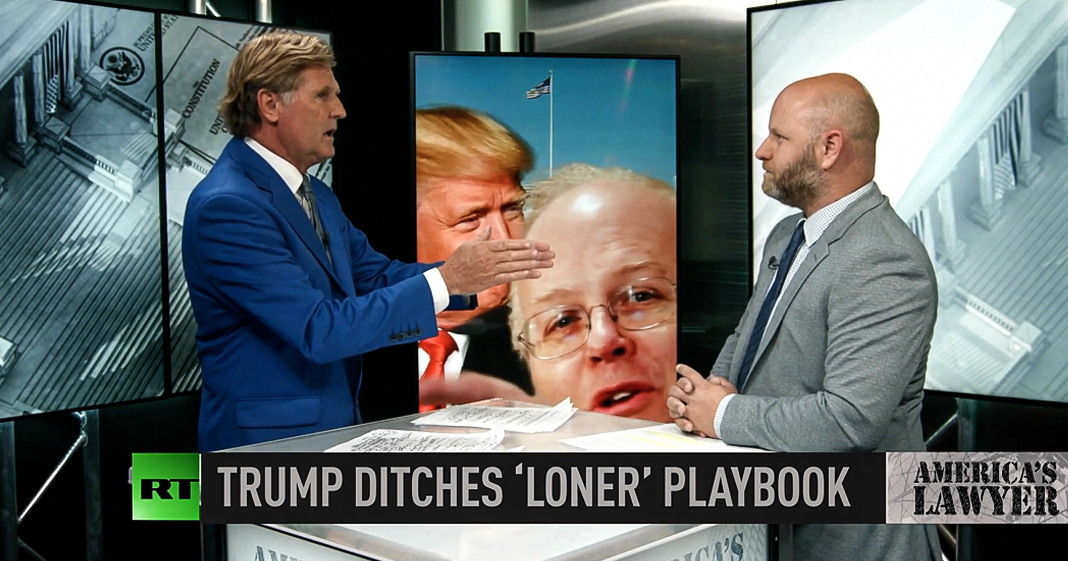 Mike Papantonio: Facebook is trying to help other companies prevent unions from forming with a new tool called Facebook workplace. The tool is going to give employers an overhead look at what employees are saying to each other. And I have Farron Cousins from the trial lawyer magazine and all around just great journalist who writes about these types of things to talk about it. Farron, listen, this, this is, we have watched Zuckerberg turn into from this, this hero of the left to this dark, dark character who understands money matters. Right? So now this is his new money plan. Talk about it.

Farron Cousins: Right. It’s this platform called Facebook workplace. And what it is is it gives an employer like Walmart or Starbucks those are two companies who are using this, their employees can log into their Facebook workplace and it’s like a regular Facebook interface, except it’s only for those employees. So they can talk to each other about work related items. They can, you know, talk about what happened on the shift and things like that. But management, and this is how Facebook pitched it. Management at those companies has the ability to filter out certain words, basically what they called content control. By doing that by preventing certain words from popping up, like in their presentation, they said, unionize.

Farron Cousins: Yeah, don’t use those words. They actually can control the flow of these conversations and almost influence the way these employees are thinking and speaking to one another.

Mike Papantonio: Okay. You’ve got Walmart, you’d expect that.Campbell soup, yeah, they’re using the product. But here, here’s the point. The ugly part of this story, there’s so many ugly parts, but one ugly part was they were using this, they would get in a group of CEOs or whoever’s making management decisions and say, look, this is what we’re selling you. They weren’t equivocal. We’re selling you this so you can spy people. Then they get caught, right? Spokesman says, oh no, no, no. This was just an idea. We haven’t even launched this. Well their, their, their talk was, well, this is a feature only in early development. You think?

Farron Cousins: Well, and that’s, you know, we already have companies that are currently using this. Lee Fang with the intercept is the reporter here, he knows what he’s talking about. He did a phenomenal job drilling into this as he always does.

Mike Papantonio: Brilliant, brilliant, brilliant reporter, Lee Fang. We did a story last week when he was victimized by, by one of his coworkers, because he said something that the coworker thought was politically incorrect. This is a great reporter here. So he’s digging into this. Nobody else is, are they?

Farron Cousins: Right, and he’s the one who found this information out. He’s the one who follows, you know, the rabbits down all these different holes and that’s how we know that this is not as Facebook says, oh, it’s just something we’re kicking around. Maybe an idea for the future. This is something that easily be implemented right now. Some companies are already using it and they’re using it to be the thought police of their employees. They do not want them talking about certain things. They do not want to see any criticism coming from them and if they do, they could use that as grounds to, you know, maybe get this rabble rouser who wants a union, get them out of there. Fire them. Move them to a different shift with people who don’t like unions.

Mike Papantonio: Right. Okay. Now this has taken place when America is regarded, I mean, this was, let’s say it was the international trade union association that did, they did a look at all developing and developed worlds, all economies. They said United States is the absolute worst when it comes to protecting labor. Okay. So here you have this organization that says, hey, we’re going to make that even better. One part of the story I think is really interesting. There’s, there’s this shakeup, this, this war taking place that was described the word, the word, the wording, it’s a, it’s a shakeup between the snowflake sensors at Facebook and the new business types that are at Facebook. Okay. You got the way left wing snowflakes versus the corporate types that are saying, look, we’re a business. We’re not here for the fun of it. Where’s that going to land?

Farron Cousins: I, it’s going to land on the corporate side a hundred percent. You know, even if the people who don’t like where Facebook is headed, and to be honest, I wouldn’t either. You look at this, it is turned from this, you know, hip cool social media company to just another corporate behemoth that has its hands in too many honeypots right now. But it, it’s going to go with the money.

Mike Papantonio: Yeah, I think it is too.

Farron Cousins: And the executives, they’re going to be the ones calling the shots. Zuckerberg is going to either continue to lose control over parts of his company, or he’s going to become just another, you know, faceless behemoth of corporate America.

Mike Papantonio: Donald Trump’s reelection campaign is in big trouble and he’s now turning to the experts to turn things around and Democrats need to start taking this seriously. Okay. The turd blossom is back. The turd blossom of course, is Karl Rove. And he was given that name interestingly enough, by, by Bush. The Bush family regard him as the turd blossom and there’s a reason for it. He’s, he’s an ugly little character. He’s got slimy little ways that he goes about it. He goes all the way back to the Southern strategy with Lee Atwater, where they actually won by scaring the bejesus out of everybody. So now the turd blossom is back and he’s telling, he’s telling, he’s telling Trump shut up. Okay. Get control of what you’re doing. Take it, take it from there.

Farron Cousins: Well, obviously, I mean, I think everybody at this point understands Trump has huge problems with his reelection. You know, the, the rally this past weekend was a total bust. But his current campaign manager, Brad Parscale, the guy is a grifter. You know, he is driving around in a brand new Ferrari. He’s using his own companies to contract through for the Trump campaign. He is bilking Donald Trump for every dollar he can. And now Karl Rove has come in. It’s likely Parscale will be gone in the coming days or weeks or months, but not only is Rove coming in as a savior of the campaign, but also because the corporate donors in the Republican party have wanted him to go in. In the past few days, there have been reports that these Republican donors are calling the Trump campaign. They’re demanding answers.

Mike Papantonio: We’ll give, we’ll give you money if you do.

Mike Papantonio: If you’ll follow our playbook. Here’s our playbook. I’ve got David Lamb coming on the show later. Brilliant, brilliant pollster, always calls it, right. So Karl Rove, this is the new plan, law and order that the, the sale is that Dems have lost control of the entire country. Just look at Chaz, right? Look at Chaz in Seattle, where, or look at Minneapolis. The, the left has gone crazy and the Dems are part of that. That’s the first sale. The second sale that Dems are promoting burning down our country, changing our culture and revamping our culture. That’s the second sale. The third sale is, is, is, is Joe Biden is, his brain is fried. And I think this is an interesting thing. Did you see the video they sent out where they have Joe Biden and Obama running down a hallway, and then they’ve got Trump, looks, he looks, he looks like he’s ill walking down that ramp after he gave a speech. That’s part of the sale. And that, that Dems are a disaster where it comes to the economy. And more importantly, Dems want to do away with police. That’s the playbook that we’re going to see from Karl Rove. I promise you.

Farron Cousins: Right, and one of the things we’re seeing right now from Trump’s people, you know, those aligned with the campaigns, is they are all on the same message. And that message right now this week is Joe Biden is hiding. Joe Biden can’t be seen in public because when he is, he says stupid things and that’s true. He does, but so does Trump. But that’s why Trump spent so much time at that rally talking about why he had to have help down that ramp. Because he’s trying to say, I am perfectly fine and mentally and physically fit. Joe Biden is not. That to me is the big message. And Rove knows he’s got to get the handle on that because he had to handle George Bush.

Farron Cousins: Who wasn’t there at all.

Mike Papantonio: He brought George, George Bush from an abysmal position. So all these Dems that think it’s over.