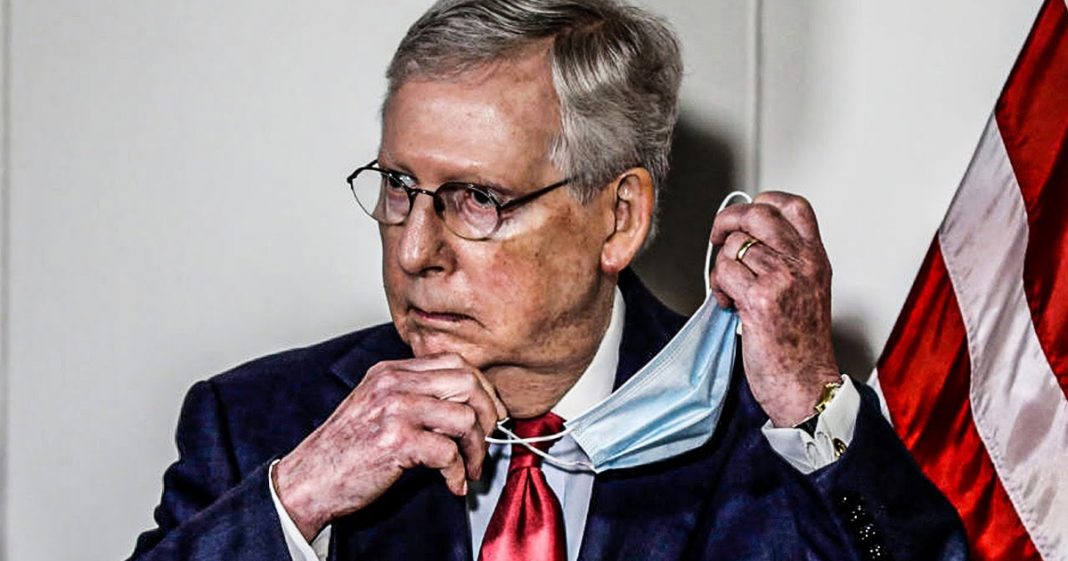 Democrats in Congress have finally decided that it is time to lead by example, and they have announced that they will be removing Republicans from Congressional hearings and meetings if they refuse to wear face masks. This threat actually applies to anyone in Congress, but the only ones who seem to have a problem wearing the masks right now seem to be Republicans. Ring of Fire’s Farron Cousins explains why this is a great move by the House Democrats.

Democrats in the house of representatives have finally decided to start leading by example. And on Monday, a representative, Jim Cliburn, the chairman of the house, select subcommittee on the coronavirus crisis announced that going forward, anybody who tries to come into one of his committee meetings, any kind of coronavirus meeting, if you try to come in there and you aren’t wearing a mask, your butt’s going to be kicked out. We are enforcing the mask policy, at least for the Corona virus sub committee. That’s good. That, that is a good thing. That, to be honest, little shocked that they hadn’t done that earlier, you know, kind of seems like the type of thing you should do, but in a statement that was actually sent to Republican Steve Scully’s the ranking Republican on the committee. Cliburn said, quote, going forward. As long as the attending physicians requirement to wear mask is, is in place.

I will not permit any member of the subcommittee to participate in person in any committee meeting or hearing, unless the member is wearing a mask and strictly adheres to the attending physicians guidance. Uh, apparently what’s been happening is that Republicans in the house do not want to wear the masks. You know, they don’t want to do it. It’s kinda like the episode of Seinfeld where Kramer doesn’t want to wear the AIDS ribbon. And then he gets the shit beat out of him because that’s kind of what needs to happen right now to the people who say, you know what? I don’t want to wear the mask. Great. It’s not about you. It’s about protecting everybody else. And certainly those Republicans in the house of representatives who are on the frickin Corona virus committee, they understand the dangerous cause that’s literally all they get to deal with while they’re on that subcommittee is the dangers of the pandemic.

And yet the Republicans are still stupid enough to not wear the masks. Now, according to Republican, Steve Scalia, the ranking Republican on the committee, he doesn’t feel the master necessary because after all they’re maintaining the social distancing. They’re all sitting six feet apart. So what’s the big deal? Well, the big deal is that for a couple months now, the six foot rule has pretty much been proven to be 100% inaccurate because droplets from somebody, a cough, a sneeze, and sometimes even talking can travel over 13 feet in the air. So the six foot rule really doesn’t do a whole heck of a lot of anything. And when you consider the fact that you might be sitting in that room with those people, breathing that air for one to two, maybe even three hours that day nonstop, Mia, you need a mask.

There’s a lot of research, isolated air in these large buildings. That’s simply the most efficient way to cool them down. Just like a casino. It’s just like a hotel. That’s what happens. And these Republicans don’t seem to understand that maybe they need to spend a summer working for an HVAC company that deals with big buildings. So they understand it a little better where all the air comes from. I did serve me well, nevertheless, Democrats are doing the right thing here and I applaud them for it. The public needs to see those in leadership positions, following the same rules that they want us to follow. If you want more people to join in and say, yes, I’m going to wear a mask to go out there and be seen in yours, tweet about it, send out pictures, post them on Instagram, how celebrities are doing it to try to convince people to do the right thing. You would think those in leadership positions in Congress would be doing the same thing. So I applaud Kleiber and for his actions here, and hopefully the Republicans on this committee will just add here to the attending physicians guidelines instead of causing a scene that gets them a, you know, their little martyrdom of, Oh my God, I’ve been kicked out because I refuse to wear a mask. Stays strong people it’s coming. You just wait.