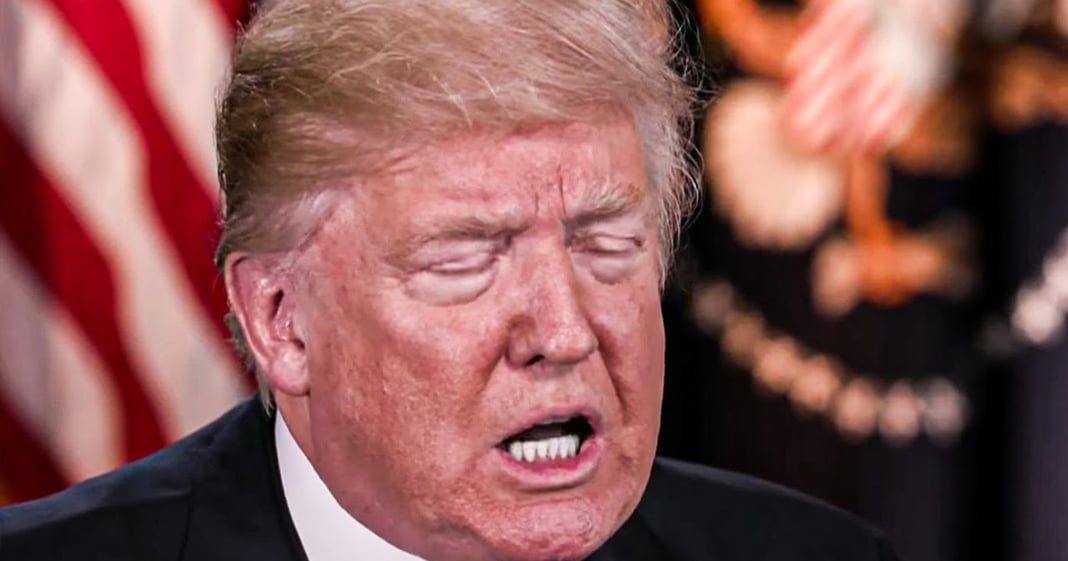 According to a report from Politico, Donald Trump has finally come to the realization that he and his campaign need to do something more significant if they are going to beat Joe Biden and the Democrats in November, but his staffers are starting to worry more and more that the President won’t be able to do that. He is undisciplined and refuses to listen to advice, and that arrogance is very well what might cost him this election. Ring of Fire’s Farron Cousins explains what’s happening.

According to a new report by Politico. There’s a lot of signs out there right now that indicate that Donald Trump has in fact accepted the reality that he is losing to Joe Biden as of right now, and that he needs to come up with a better strategy for his campaign. In fact, uh, on Thursday evening, during that interview with Sean Hannity, Donald Trump actually admitted that, uh, as it stood right now, Joe Biden was looking like he was going to be the next president, because according to Trump, I guess a lot of people just don’t like me. And so he, he conceded the, then at that point in that very easy interview that Joe, Biden’s probably gonna win this thing because I’m just hated, uh, his advisors by the way, were very angry with him after that interview, because one of the things, and this kind of got overlooked a bit, uh, that was happened in that interview was that Hannity asked, like, which go for a second term. And Trump couldn’t answer. He started talking about how much he hated John Bolton and how people are so mean to him.

Never really couldn’t come up with a single actual answer as to what I want to do in a second term. Just about how much these other people suck. That’s not an agenda, but okay. And so his advisors were very angry. The wealthy donors to the Republican party got angry about this because they have been begging him for weeks, come up with a strategy, come up with a message. And the best he can come up with is keep America great. John Bolton sucks. That’s what you got. But at least he understands now like you can’t win an election on that. So he has according to reports, according to the people that Politico spoke to, he has been talking and having meetings with his advisors and they have decided, or he has decided that the best way to really kind of get a handle on this whole thing is for him to take a more hands on approach, hands on role with the campaign itself. So rather than shutting him up, rather than trying to tone him down or tame him, they’re going to just let him take over more.

That’s the worst possible thing. That’s like firefighters showing up at a building that’s on fire and saying, you know what, maybe we ought to let the fire decide when it wants to go out. No, no, that’s, that’s going to destroy everything. Now, look, I’m totally cool with that. Cause I do not want Trump to win, but just from a purely like, you know, I took courses on political management. And so it is painful to see these so-called professionals who work on this campaign, allow him to do this. Like if the alternative is to stand up to him and be fired, then do, because you’re not going to want to put this campaign on your resume because it’s going to go down in flames because you let the fire decide when it wanted to be put out. And the answer is never, the fire never wants to be put out because then it’s not a fire anymore.

In fact, things are so bad. One former Trump political advisor named Sam Nunberg, who is still a Trump supporter, by the way, had this to say, he said under the current trajectory, president Trump is on the precipice of one of the worst electoral defeats in modern presidential elections and the worst historically for an incumbent president, he’s going to be facing realistically a 400 plus electoral vote loss. And the president would need to strongly reconsider whether he wants to continue to run as the presidential nominee. Uh that’s if his numbers dropped to 35%, that last part, but as it stands right now, even his friends, even the guys who like him are saying he has no shot and they’re starting to get through to him. That’s why Trump has taken a hands on approach. That’s why he is pushing Parscale out to a degree. But in addition to Trump taking over a more, you know, hands on approach to the campaign, he’s also letting Jared Kushner do that too.

So while they’re acknowledging that we’ve got a ton of problems, we need to fix all these problems. We’re going to do the exact opposite of fixing the problems. It’s going to be hilarious to watch, but it’s also going to be very cringe-worthy for those of us, who’ve studied how to run campaigns, you know, for anybody who’s worked on a campaign to watch this happen, as much as we dislike the guy, uh, we also know like it’s kind of easy to fix it. Really. It truly is. If you know what you’re doing, a good smart adviser could come in there and fix this campaign. Like that problem for the Republicans is that it 100% depends on if they’re able to muzzle the president, because if they’re not, there is nothing you can do. That’s going to save his failing campaign.