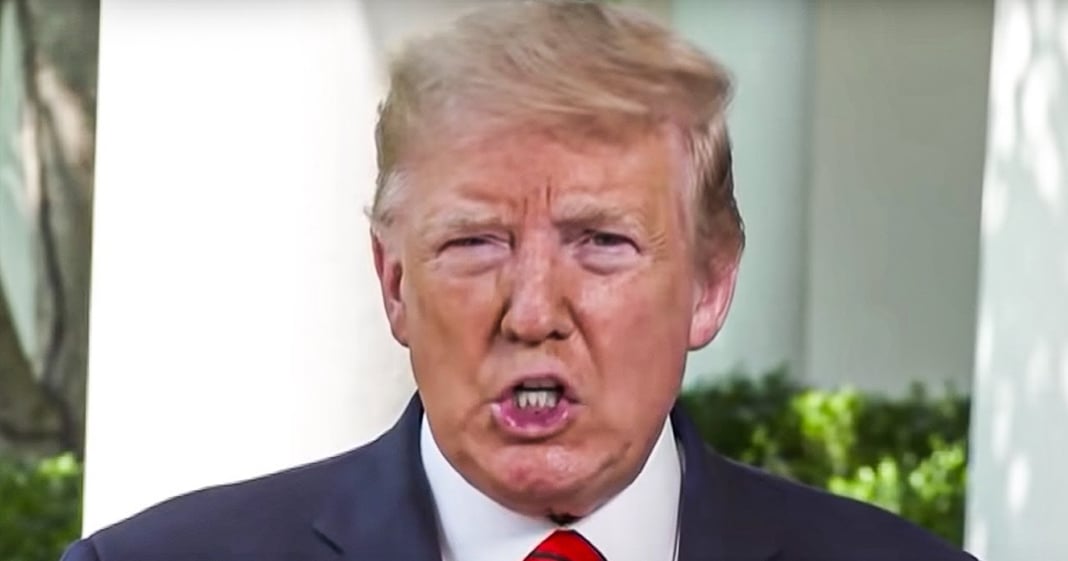 Donald Trump was left with little choice but to delete a tweet where he praised one of his supporters who was yelling “white power” at a group of protestors after his surrogates got routinely destroyed on the Sunday morning talk shows. But rather than sitting and strategizing with his team about how to handle the nonstop PR crisis, he decided to go for a relaxing golf outing instead. Ring of Fire’s Farron Cousins explains what’s happening.

So yesterday morning, Donald Trump decided to tweet out a video of a group of elderly folks from the villages down there in South Florida. Uh, you had some, uh, protesting Donald Trump. Some people in the villages did not like him. Then you have the Trump supporters driving past on their golf cart. Uh, and one of them started yelling white power. Now his yelling white power was actually in response to the other protester asking him where his white hood and robe were at, because if you’re a Trump supporter, uh, you know, you’re okay with his racism. And that’s what they were trying to point out. That’s what the protesters wanted to point out. And then the Trump supporter responded by yelling white power. That video made it to Twitter. Donald Trump retweeted the video with this caption. He said, thank you to the great people of the villages, the radical left do nothing. Democrats will fall in the fall. Corrupt. Joe is shot. See you soon.

And then his surrogates had to make their weekly appearances on the Sunday morning talk shows. And of course, every one of them was asked about this tweet. And not surprisingly, none of them could really defend it or even explain it in any kind of meaningful way that made the president not look like he was congratulating his white supremisist followers. And so later on in the day, he decided to delete it. Now, did he make an apology? No. Did he feel any remorse or do anything throughout the rest of the day that would make it seem like he wasn’t trying to be overly racist? No. What did he do? He went and played golf. He went and played golf in Virginia, even though he had canceled a golf trip to New Jersey for the weekend. Cause he said he needed to be in D C to really get a handle on things, you know, to help run the country.

Cause he’s, the president kind of has to do that from time to time. And he said, that’s where he was going to do. And he did it for a fricking day before he was like, screw this, I’m going to play golf. I can’t do this anymore. I got to hit the links. I just tweeted out something super racist. So I’m going to go hide on the golf course again. Um, earlier the weekend too, by the way, uh, starting on Friday, he started retweeting the mugshots of a predominantly African American individuals who had been accused and were wanted by police for allegedly, uh, you know, uh, defacing statues across the country. Because for some reason we’re obsessed with statues. Can we get over that by the way, statues are stupid. I don’t care who they are or what they’re about. Let’s just get rid of them and replace them with actual, like cool works of art, replace them with a sculpture, you know, replace them with fictional characters, but let’s not, you know, idolize,

These, you know, dead people from the past. Uh, I’m pretty sure all the right wing Christians, you have a book that actually says you’re not allowed to do that. That’s a sin. So let’s put an end to that right now. But what do we do about the racist president? Right? Cause I’ve seen some folks on Twitter, some right-wingers on Twitter, try to defend the white power chant of the guy in the golf cart, uh, by saying no, no, no, he’s not really saying it. He was saying it to mock, to mock the gentlemen who was calling him a racist. Maybe he was, I don’t think he was at all, but that still doesn’t excuse the president of the United States From retweeting it and thanking that individual Because he has no way of knowing whether or not the guy was being sarcastic

For all. He knows that dude meant white power. And for all we know, Trump means it too. Look at the policies, look at the statements, look at the history. And that’s how you can determine the intent behind what the president says and does on Twitter. And based on what we have seen the attacks on the so-called shithole countries, uh, you know, everything about the border, everything that he has said about immigrants, everything that he has done with regards to his white supremacist followers and the things he has said about them trying to downplay their egregious behavior. Yeah. I think Trump thought this dude meant white power and that is why he retweeted it.