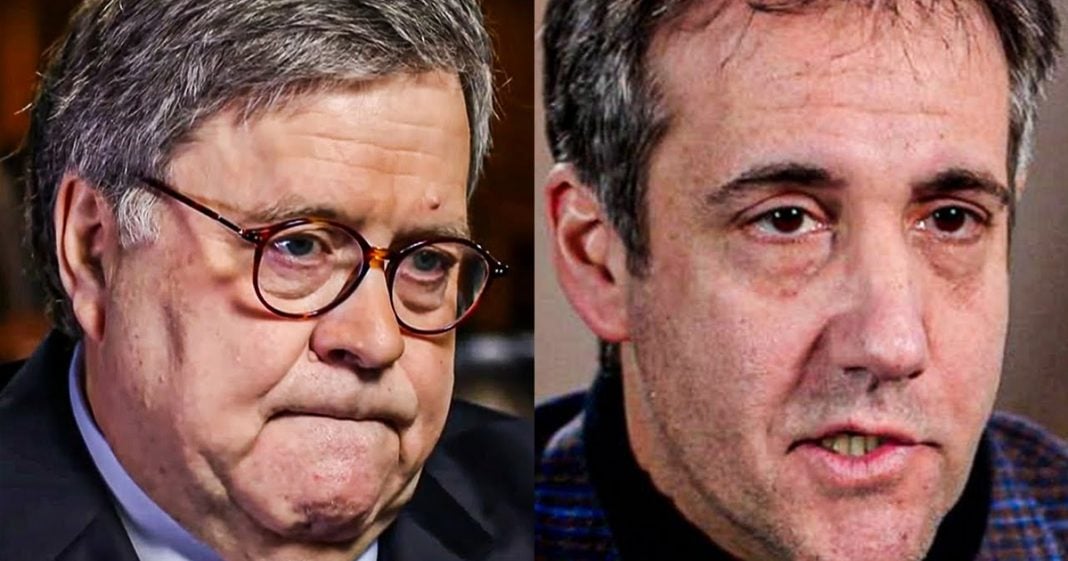 According to multiple different sources who spoke with The New York Times, one of the first orders of business for William Barr when he took over as Attorney General was to try to undermine the prosecution of Michael Cohen, Trump’s former lawyer/fixer. Trump has repeatedly gone after Cohen since he testified before Congress, but it appears that he was more worried about Cohen than he let on publicly. Ring of Fire’s Farron Cousins discusses this.

So this week has been a pretty big one with regard to William Barr, the attorney general of the United States. Not only did we have the whistleblowers testify before Congress, that William Barr was injecting himself into certain cases, intervening on behalf of Donald Trump, that he was also using the DOJ to kind of go after his pet projects, like his crusade against marijuana, like Jeff Sessions before him. But also at the same time, at the same time, by the way that William Barr was out there on NPR saying, no, I, there is no pattern here. I don’t use the DOJ to help Trump or go after my personal projects. It’s all media hysteria, he said. Well, at the same time this was happening, the media came out with another story, the New York Times, that they had spoken to multiple different sources who confirmed that when William Barr first came to the department of justice in early 2019, his first order of business was an attempt to undermine the prosecution of Donald Trump’s former lawyer slash fixer Michael Cohen. According to the report, he went so far as to instruct justice department officials to draft a legal memo, casting doubt on the legitimacy of Cohen’s conviction, according to sources cited by the Times, but they refused to do so.

He also wanted to cast doubt on whether or not any of these things, you know, were really as bad as they said they were. He wanted to downplay all of this and maybe possibly get Cohen off the hook. Now what’s interesting about that is that Donald Trump and Michael Cohen, once Cohen started going down and knew Trump wasn’t going to pardon him, Cohen started singing like a bird. And then so Donald Trump, Trump started going after Cohen left and right, but behind the scenes, especially right around the time that, you know, Cohen had testified before Congress, you had William Barr out there understanding Cohen’s threat to Donald Trump, trying to get him off the hook. Because if William Barr could have pulled that off, that absolutely could have saved Donald Trump some pretty serious headaches. So that just goes to show you what William Barr was up to. Maybe at Trump’s request.

Maybe not. We don’t necessarily know that at the, at the moment. We may never know that, but there are lots of things that William Barr has to answer for. Unfortunately, we have too many Democrats in leadership positions in the House who keep telling us that we’re not even going to try to impeach the guy. We are not going to impeach William Barr, that’s what Jerry Nadler said at the beginning of the week. And then as more and more information came out Nadler kind of softened it and said, maybe we have to impeach, but then don’t worry because after Nadler softened his view on impeachment, Nancy Pelosi came out and said we are never, ever, ever going to impeach Barr. Kudos to anybody who got the reference right there. It’s not going to happen. We’re just not going to impeach him. You know, why waste your time?

You want to change things, Pelosi says, go to the polls and change things. And I do encourage everybody in Pelosi’s district to go to the polls and change things, vote for Shahid Buttar for Congress. Replace Nancy Pelosi, because she is completely ineffective. She is completely spineless. All she is good for are these, you know, photo ops, you know, wearing that ridiculous African garb and taking a knee as if that does anything to actually solve the problem, ripping up Trump’s speech, giving the sarcastic clap. You know, cooly walking out of a meeting or standing up and pointing at. None of that matters. What matters is what you do at your job and she’s not doing anything and Barr on the other hand is doing a lot. And a lot of it looks like it could very well be criminal, but Pelosi tells us the only way we can fix that is to go to the polls. No, the way we fix the fact that you won’t do your job is to go to the polls. The way we fix William Barr is to impeach him.