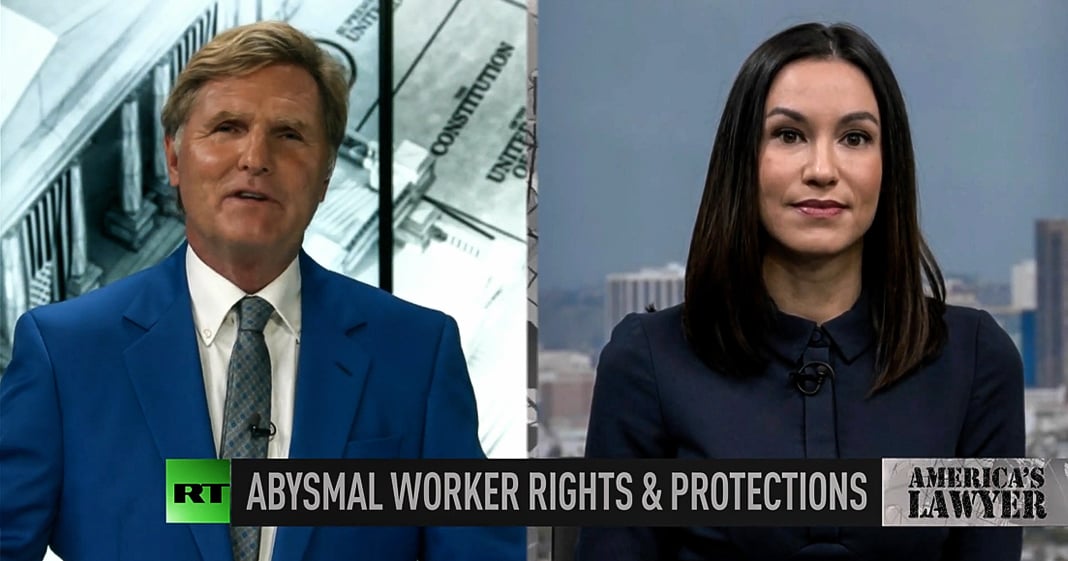 Mike Papantonio:             Of the world’s richest nations, the United States ranks absolute last, where it comes to workers’ rights. RT’s Brigida Santos joins me now to tell that story. Brigida, what can you tell me about the latest findings by the world’s largest trade union federation?

Brigida Santos:                   Well, the international trade union confederation has ranked the United States last among the world’s seven largest advanced economies when it comes to workers’ rights. Now the ratings go from best to worst on a scale of one to five, depending on compliance with collective labor rights. The US has been given a rating of four, which means that the government and companies engage in serious efforts to crush the collective voice of workers and put fundamental rights under threat. America is the only group of seven nations with systemic violations of rights in the workplace. Other countries around the globe that also bear four ratings include Mexico, Nigeria, the Congo and Venezuela, all of which have fewer resources than the United States.

Mike Papantonio:             Hmm. What kinds of violations, Brigida, are the most common against employees right now? What do you see as the trend?

Brigida Santos:                   What the global rights index has exposed is a breakdown in the social contract that governments and employers have with workers. Now, this isn’t only happening in the United States, but on a global scale. And in fact, violations against workers around the world have reached a seven year high with upward trends in restricting collective bargaining, criminalizing striking, and excluding workers from joining or establishing unions. While it’s not illegal to strike or establish unions in America, workers who try to do so here are often retaliated against by employers. You know, back in 2017, a judge had ruled that Tesla CEO, Elon Musk broke the law by threatening employees and retaliating against them for wanting to unionize. Another US-based company that does things like this is Amazon, you know, they’ve been accused time and time again of firing workers who have led or participated in strikes.

Mike Papantonio:             Yeah. One story that we did awhile back, I thought it was really interesting, is that they were actually doing plants. They’re putting plants inside around workers to act as spies to figure out whether unions are developing. To find out who, who, who has a complaint. It’s, it’s really an ugly process. But the point to me that’s important here is as we beat down unions in the United States, the American middle class is disappearing. They’re not around anymore. And that’s, and what that ends up doing is moving to the .0001% of the economy of, of Americans holding onto all the money. This is a really, it’s a really ugly story. When this federation says, look, we looked at everything and this is bad. I want to ask you this. How has the coronavirus pandemic allowed companies to even advance this further on worker agendas?

Brigida Santos:                   Well, since the COVID-19 outbreak, many companies have changed the rules to boost their own financial interests at the expense of workers. Now, in some industries, employees have even been asked to sign away their rights to sue their bosses if they can track the virus on the job. And the US chamber of commerce is now lobbying for national liability protections. But we really see violations of worker’s safety and health playing out in the meat packing industry. Thousands of pages of documents reveal how major meat packing companies like Tyson foods, national beef, Smithfield, and others have failed to protect over 24,000 workers from contracting the coronavirus. Emails and records show how meat packing plants were too slow to implement social distancing measures, install protective barriers and have workers wear masks. Meat packing companies have even used their protective, their power to circumvent recommendations from local health officials. And this has happened in other industries as well. Unfortunately, coronavirus is giving these companies sort of like permission to change the rules and they say that they’re doing it to protect worker, workers, but they’re really not.