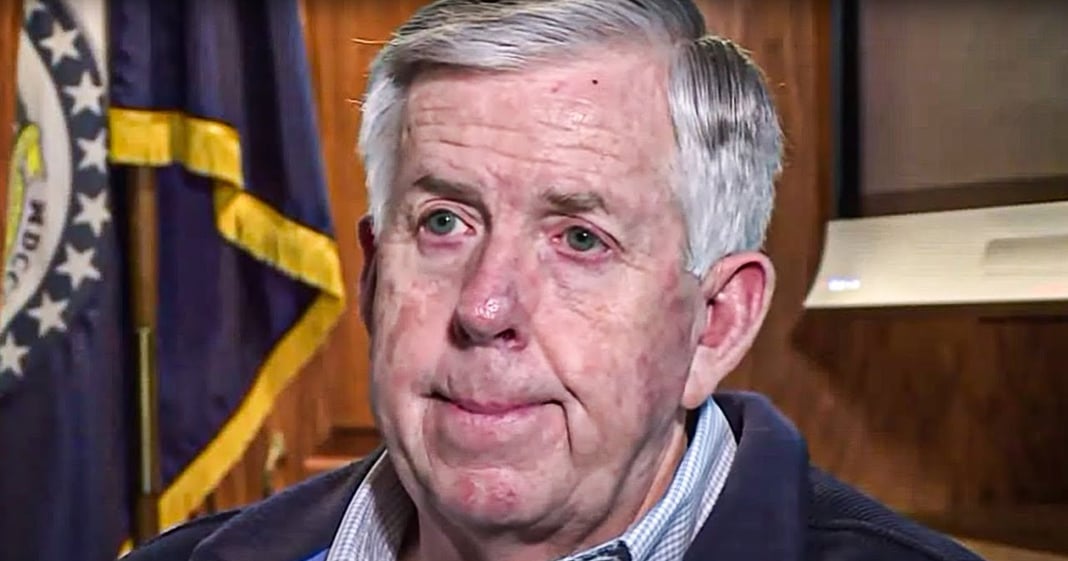 Republican Missouri Governor Mike Parson told The Kansas City Star this week that he takes absolutely no responsibility and doesn’t feel guilty at all about the rising number of Coronavirus cases in his state that have appeared since he lifted the lockdown orders at the end of May. This is the Republican mindset – they were so desperate to save the economies in their states, but didn’t want to do anything to actually save them, so they just sacrificed human lives instead. Ring of Fire’s Farron Cousins explains what’s happening.

With States across the country continuing to push forward with their reopening plans, the coronavirus has continued to spread at an alarming rate. You know, we never got through the actual first wave of the virus before we saw the massive resurgence that some have erroneously referred to as the second wave. But it’s actually still just the bigger part of the first wave. But nevertheless, governors across the country left and right said screw it. We’re pushing forward with reopening. And one of those people is a Republican governor, Mike Parson from the state of Missouri. Now he actually, Mike Parson, started the reopening process of Missouri in early May, early May, one of the earliest to start reopening. Just screw it, we’re going forward with it. And so Mike Parson did this. This week, went ahead and ended all social distancing requirements. So they are officially back to business as usual.

And he did it he said, because you know, he wanted to go ahead and kickstart our economy here in Missouri or their economy, there in Missouri. And so this week, when a reporter asked him, hey, cases of COVID-19 are skyrocketing here. Do you feel like maybe this is your responsibility? You feel a little guilty about this because you said, hey, everything’s cool? Go back to work. No more social distancing. You don’t need a mask. Just go out there and you do you. You feel, you feel like maybe you, you were responsible? To which Republican governor Mike Parson said, nope, and I don’t feel guilty. Here’s the exact quote word for word. Actually, let me go ahead and read the question first. Do you feel any personal responsibility for the people who’ve been infected and don’t recover after you chose to reopen the state?

And his response was, I don’t even know where you come up with that question of personal responsibility as governor of the state of Missouri when you’re talking about a virus. That’s no different than the flu virus or do I feel guilty because we have car accidents and people die every day? No, I don’t feel guilty about that. I don’t know that any person’s responsible for that no more than anyone else standing out here in this hallway. I can say the same thing for the media. Maybe you don’t do a good enough job, really telling people the facts. Do you feel responsible for that? About the whole car accident thing too, by the way, technically yeah, as governor, there is something you can do about that. You can commission studies to see like which intersections aren’t very safe. If you have an area where there seems to be a lot of car accidents all the time, just everybody’s ramming into each other.

There are things you can actually do about that and by not taking action, yeah, that technically does become your responsibility. You know, some jackass rear-ending somebody else, yeah, there’s nothing you can do about that. Somebody disobeying traffic laws. But they’re dangerous areas, blindspots. So yes, yes. You, you can’t say there’s nothing you can do about it. Because as governor of a state with the resources at your disposable, disposal, excuse me, there are things you can do about so many things, including extending the lockdown, extending social distancing, initiating mask requirements. So yes, you are responsible and you may not feel any guilt, but you’re guilty as hell. Other governors in some States, not all of them, not even most of them, not even enough of them right now, starting to issue orders. You can’t go out in public if you don’t have a mask. Folks, that should have been instituted in March. Little late, we’re coming up on July in a week.

Nevertheless, they’re starting to do it now. So kudos to them. That needs to be nationwide. Donald Trump needs to lead by example and these Republican governors who said, oh, we’re going to kickstart our economy. Yay. You could have done it better ways. You could have issued statewide stimulus. You could have issued a statewide small business loan program to keep these businesses afloat while the pandemic rages on. Just say, listen, I’m sorry, you can’t open, but we’re going to pay you. We’re going to make sure everything is okay in your world. You’re not going to have to pay your lease. You’re not going to have to pay your rent, your mortgage, whatever. We’re going to suspend all of it. We’re going to give you a stimulus so you can still buy things and support businesses. So you make more money, just stay home for two or three months and we’ll get through this. A move like that at the state level, damn sure at the federal level, we’d be done. We’d be done. But it didn’t happen and things right now are worse than ever.