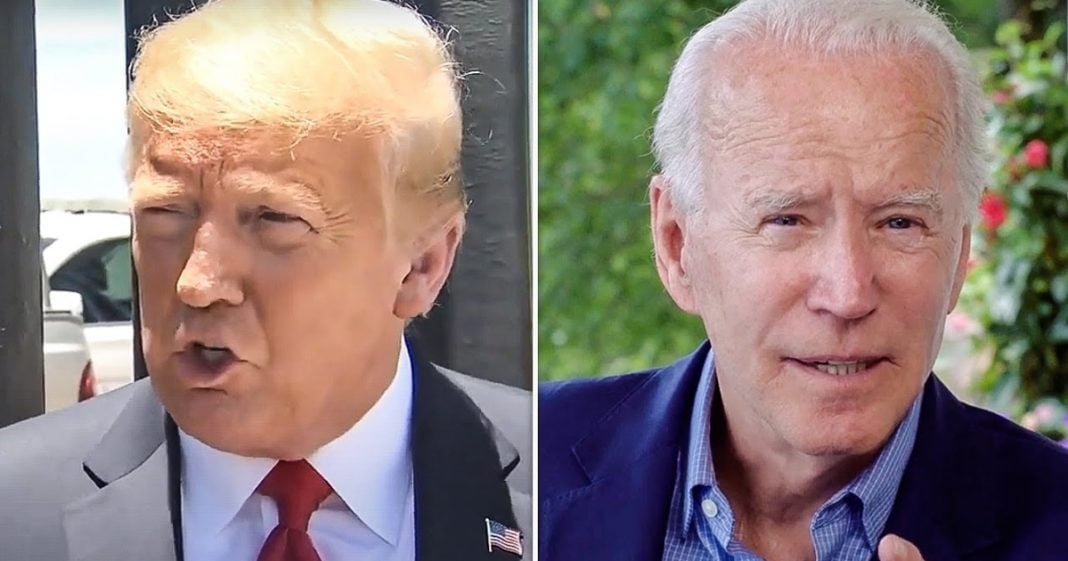 Neither Donald Trump nor Joe Biden’s campaigns have been able to coalesce around a single message to sell to voters for November. Biden is promising a return to “normalcy,” whatever that means, while Trump says he will “Keep America Great” as we continue to hit economic numbers not seen since the Great Depression. These messages aren’t going to win over new voters, and eventually both men’s campaigns will have to offer something better or face destruction at the polls. Ring of Fire’s Farron Cousins discusses this.

Right now, Donald Trump has a problem and his biggest problem obviously is that he’s losing to Joe Biden in every single poll, in every single swing state, possibly even losing in Texas. They’re statistically tied right now. So things are bad for Donald Trump, but believe it or not, folks, Joe Biden also has a problem and he has the same problem that Donald Trump has. And that is that neither campaign right now has a coherent message as to why people should vote for them. Now, notice I said vote for them, because right now, according to the latest polls, one of the reasons Joe Biden’s support is through the roof right now is not because people support him, but because they want to cast a vote for Biden, because it’s really a vote against Donald Trump. Only 31% of Biden support out there says it’s because they’re enthusiastic about him. The rest of it is because they hate Trump. So how do you switch that? You get a good message. You send a good plan out there to the United States and Biden so far has failed to do that. His only message is I’m not Trump. Let’s return to normal.

And yeah, sure, right now normal would be great. Wouldn’t it? I would love to not be doing this every day from my house. I would love to be able to go to the grocery store without having to wear a face mask. I would love to be able to go on vacation again, to travel on an airplane. But I understand that I can’t, and I’m not pissed about it. This is just the way things are, but that’s not actually the normal Joe Biden’s talking about, folks. He’s talking about the normal five years ago, where you didn’t have a president getting on Twitter and insulting people’s appearances and just making stuff up willy nilly and telling more lies than ever before. Joe Biden’s returned to normal is the president just kind of stays quiet. You know, he’s not doing anything really horrible domestically, not doing anything really great either. We still have problems. We still have issues. We still have police brutality. We still have Americans who cannot afford their prescription drugs. We still have people losing their jobs. We still have people who can’t afford rent and groceries and homeless problems and everything like that. And we still don’t quite have equality for the LGBTQ community, but that’s the normal that Joe Biden’s talking about. And I gotta tell ya for most of us here in the United States, that normal, by the way, wasn’t working.

So thanks, but no thanks, for a return to that. But that’s his message. Now, Trump, on the other hand, his message is keep America great. What the hell does that mean? Because there is nothing about this country right now that is great. There is literally nothing about this country right now that’s great. I’m sorry. There’s not. There’s our environment, we’ve got some great views. Oh, but you’re letting corporations poison those. You know, our beaches our, our valleys or canyons or national parks. You’re letting the oil companies come in, you’re letting the coal companies come in, exploit those, blasting the tops off mountains to scoop out that coal in the middle. Like it’s some kind of a chocolate truffle and you want to get the deliciousness inside. This is insane and that’s just part of the problem. Keep America great. We still can’t afford prescription drugs. We still can’t breathe clean air. Flint still doesn’t have clean water, neither do more than 2000 different water municipalities throughout the country. There’s nothing great about that. So his message sucks and his Republican donors have been telling him for the last two weeks, your message sucks. Come up with something better. And so this week they finally did announce what their new message is going to be and it’s three pronged. One, Joe, Biden’s not quite all there mentally. Okay, well neither is Trump. So that one’s kind of dead on arrival. Two, man, China sucks, right?

They’re trying to blame the pandemic on China, but that does not excuse the behavior of this administration and most of the public agrees with that. So again, this one’s already failed before it even launched. Number three, law and order, as he keeps tweeting out several times a week, law and order. Yeah, most people actually agree with the sentiments of the protestors. So maybe reform the police or defund them altogether, anything short of that and you’re probably not going to get the public on your side. He also wants to run on the economy and jobs. Okay. Well, the job numbers are getting just about as bad as they were during the great depression. So maybe that’s not a good message either. Neither campaign has a good message and when you’re looking at this, taking off your partisan blinders, just as a, you know, political strategist here, they both suck. Both of these campaigns are absolutely doing nothing at all to convince people to vote for them, not just to vote against the other guy. That’s not a winning message. You have to get people enthusiastic about you. You have to give people a reason to want you to be in the white house. And so far, neither candidate has done a good job at convincing anyone that they’re the better person other than for the fact that they’re not the other person. That’s not a winning message. That is once again, a lesser of two evils.