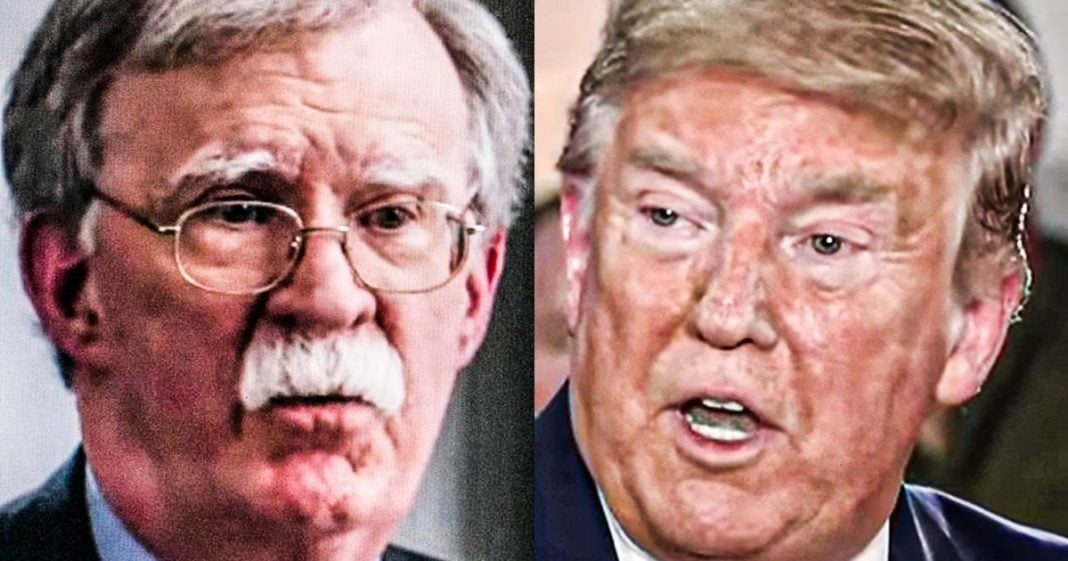 According to former national security adviser John Bolton, Donald Trump walked away from his Senate impeachment acquittal believing that he could get away with anything – the absolute wrong lesson to take away from all of that. But to be honest, Trump isn’t wrong. As long as Democrats are bumbling buffoons and Republicans are corrupt to the core, Trump can actually get away with anything. Ring of Fire’s Farron Cousins discusses this.

So John Bolton’s book is officially out now, lots of claims some that we’ve covered, some that we have not about Donald Trump. There is, you know, reports that he may have attempted to bribe China in multiple different ways. He may have reached out to other foreign countries to help him win reelection. May have been some more quid pro quos. But to me, one of the more interesting things that Bolton said in the book was that Democrats absolutely screwed up with their impeachment and because they screwed up so bad, they left Trump feeling like he could get away with anything. What Bolton had to say here, this is from talking points memo. Bolton said that limiting the inquiry to Ukraine and trying to produce a result too quickly, actually reinforced Trump’s own political agenda to keep it narrow and move it fast. He said that the impeachment inquiry failed at teaching the president a lesson about seeking help from foreign powers for his own re-election.

It’s absolutely 180 degrees the opposite of the truth Bolton said. When Trump was acquitted in the Senate, Trump instead learned that he could get away with it and he’s not wrong. Biden, or Bolton, excuse me, is 100% correct in his analysis here. Now don’t get me wrong. There was never, ever, ever, ever a chance that the Republican controlled Senate would have impeached Donald Trump unless of course they had evidence that he murdered like a dozen wealthy Republican donors. At that point, they may impeach him. I’ll be honest. They might convict them for that, but literally anything short of killing the people who fund their campaigns, they wouldn’t have convicted him. They would not have done it. And so that’s why Democrats needed to not worry about, oh, let’s just get him for this thing, because this is all the public can understand. That was the reasoning at the time, remember? You know, we talked about it extensively.

They said, we’re going to focus only on Ukraine because it’s simple. It’s short, it’s small, it’s digestible and everybody can understand it. We’re not going to get into all the possible banking issues and the financial issues and the obstruction of justice and all of this, it’s just too darn complicated for people. Yikes. And because of that, they screwed the pooch. Not because it would have led to a conviction, but because it would have exposed it all. It would have let Donald Trump know that when you do something bad, we’re going to uncover it and we’re going to tell the public and we’re going to do our best to hold you accountable. And we’re going to make sure everybody remembers that as we head into the next election. They didn’t do that. That to me is now and forever will always be the biggest failure of the Democrats during the Trump years. They didn’t go hard enough. They didn’t fight hard enough. What did we get? We got some ripped up paper. Some sarcastic claps. Some God awful pandering to African Americans that was borderline racist in and of itself.

That’s all the Democrats are good for, these show pieces. They’re not actually good for getting things done or for doing what needs to be done. You got Nadler out there this week saying, I don’t think it’s worth it to try to impeach Barr because the Democrats or, or the Republicans in the Senate, they’re never going to convict him. So what’s the point he said, he said, what’s the point? The point is to show the public that you care. The point is to show the public that you tried and that you still care about the rule of law even if that man in the white house doesn’t. Even if his cronies don’t you do and that eventually will mean something to the public. But if they look back and say, God, bless. It sure as hell looks like he committed a lot of crimes. Why didn’t we go after those? Who was in charge of the House at the time? Yeah, suddenly all those crimes Trump committed, all the Democrats in the House who didn’t launch investigations into that, you look just as complicit as the Republicans.