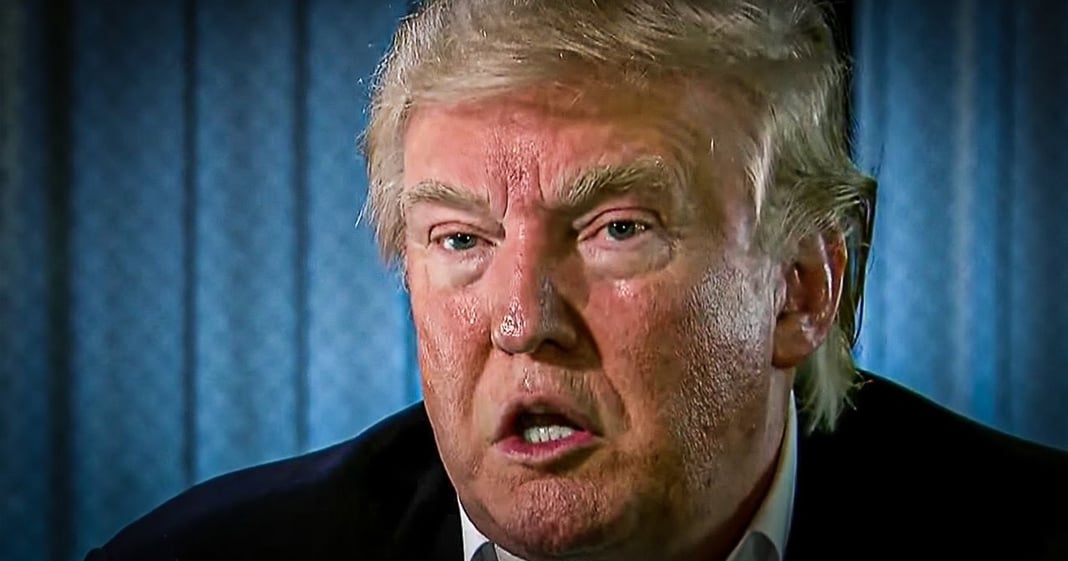 Donald Trump can’t stop talking about how great of shape he is in, both mentally and physically. In a recent meeting with his reelection campaign, he allegedly started talking about his 2018 cognitive screening test and how great he did and how impressed the doctors were. This came out of nowhere, but his obsession has spiraled out of control since then. And, as Ring of Fire’s Farron Cousins explains, there is a very good reason why Trump wants everyone to think that he’s the stable one on the ballot this year.

According to reports over the past month, Donald Trump has been obsessed, obsessed with his mental and physical health, and trying to prove that both of them are in tip top shape. Now, according to reports, it actually started earlier this month earlier in June, during a meeting with his reelection campaign and the white house. They were talking about strategy. There was about two dozen people in the room and Trump out of nowhere starts talking about how awesome he did on that cognitive function test that he took back in 2018 as part of his physical. It wasn’t related to anything they were talking about, according to sources who were present at the meeting, it just out of nowhere, kind of in a, you know, bizarre and not quite mentally stable way the president starts insisting how mentally stable he is. And the test that he took it 2019, by the way, was the Montreal cognitive assessment.

It is meant to be a diagnostic tool to see if further evaluation is warranted at the time. It is not designed to diagnose a mental illness. It’s just designed to diagnose whether or not a real diagnostic test needs to be administered and at the time they determined that it didn’t, or as far as we know, they determined that it didn’t. It’s very easy to be honest and the president was going around the room to the two dozen people there, according to people who were there, bragging about how well he did. Saying that the doctors were astounded by how amazing he did on this test. That included as the president pointed out to the people in the room, repeating five words in order back to the proctor. Oh, you’ve repeated five words, good job. Identifying animals and pictures and you know, little things like that. Because if you’re unable to do those kinds of things, it is indicative that something very serious is wrong and then you’re, you know, referred for further testing and evaluation. And Trump says that he, the way he was able to repeat those words and identify those animals, damn, that impressed those, those tests givers. Wow. They’ve never seen anybody do so well.

Here’s the thing, folks, doctors don’t say things like that, especially not in mental health exams. They’re not sitting there like, oh boy, did you see him identify which one was an elephant? I ain’t never seen nobody do it that fast. That, that’s not a thing that actually happens. The president’s lying again because he has some kind of mental illness that may be not as picked up on the Montreal cognitive assessment. But nevertheless, he is obsessed with telling his advisors that everything’s good to go up here. And as we saw last Saturday, actually, well, no, it was last Saturday, I guess, at his speech in Tulsa where he had to defend his inability to drink water or not able to walk down that ramp. He spent 14 minutes of that rally, 14 minutes saying that, oh, the ramp was slippery. It was a bright sunny day. There was no rain. He said it was as, as slick as an ice skating rink, is what he said. As slick as an ice rink. Those were his exact words. It was a beautiful sunny day. That ramp wasn’t slick.

He defended his use of water. He didn’t want to, you know, spill it on him. He didn’t want to do this. You know, the ramp was tough, but he did it anyway. He practically ran down it he said, we can see the video you’re lying. But there is a reason why Donald Trump is spending so much time defending his cognitive abilities and it’s because his entire campaign right now, their only message for 2020 is that Joe Biden is suffering severe mental decline. Which is quite obvious to everybody who’s been watching Joe Biden. Joe Biden is benefiting greatly right now from not having to go out in public. But that’s not going to last and Trump and every one of his acolytes, every one of his campaign staffers, they’re going around social media right now, you know, with the hashtag Hidin’ Biden.

Where’s Joe? Talking about his mental decline, trying to make that the central focus, but here’s where it could backfire on them. Everything they’re saying about Joe Biden is also true of Donald Trump. Kind of hard to say that this guy’s not all there when you’re also not all there. And there’s actually far more video evidence of Trump being, you know, exhibiting symptoms of a severe mental illness than there are of Joe Biden. And there’s plenty of Biden, but there’s even more of Trump and those have been the ones that the public has been watching. We’ve been watching them happen live for nearly four years. Actually, if you include the campaign for well over four years. His talking point is not yet resonating with voters. Maybe it will. Maybe it won’t, but he thinks it will. But not until he convinces everybody that he himself is mentally fit and physically fit.

But that’s not working out so well either. But he is cocky, he is confident and he is arrogant that he’s going to be able to do it. So arrogant, in fact, that last week they actually asked the debate commission to add a fourth presidential debate. Because they don’t think Biden can do it and they want to embarrass him. Now, keep in mind, this is the same guy who just about a year and a half ago, if that long was saying that he may not participate in the presidential debates. Remember we did videos about that at the time when this story came out too, because he was saying, I don’t think the networks would be fair to me. I think they would try to make it too one sided. You know, they would help the Democrats like they did with Hillary, which isn’t true. And so he was already about backing out of the debates when it looked like it was going to be literally anybody but Biden.

But now that it’s Joe Biden, he’s like, oh hell yeah. Yeah, let’s do more. Let’s do one every day. Let’s do one morning, noon and night. Just nonstop debates. You and me in the cage, doing debates. Like, that’s what he wants because that would benefit him. Believe it or not, Donald Trump, as horrible as he is at debating, he’s actually good on the debate stage because he’s not going to talk about the issues you want to talk about. He’s not going to address the things you address. He’s going to sit there insult your appearance, insult your intelligence. In the case of somebody like Ted Cruz, insult your entire family tree. And that for some strange reason, resonates with voters or at least it did in 2016. Will it work this time? Is the big question. We have seen four years of Donald Trump proving to the world that something’s not right up here. We’ve seen Joe Biden proving that something’s not right up here. So do we really want to watch these two elderly men go through four debates where they don’t know exactly what’s happening? Probably not. But Trump does because even though he’s crazy, he thinks Biden’s mental decline is worse than his. That’s the message they’re trying to sell. Right now it’s not selling very well, but anything can happen in the next four months.