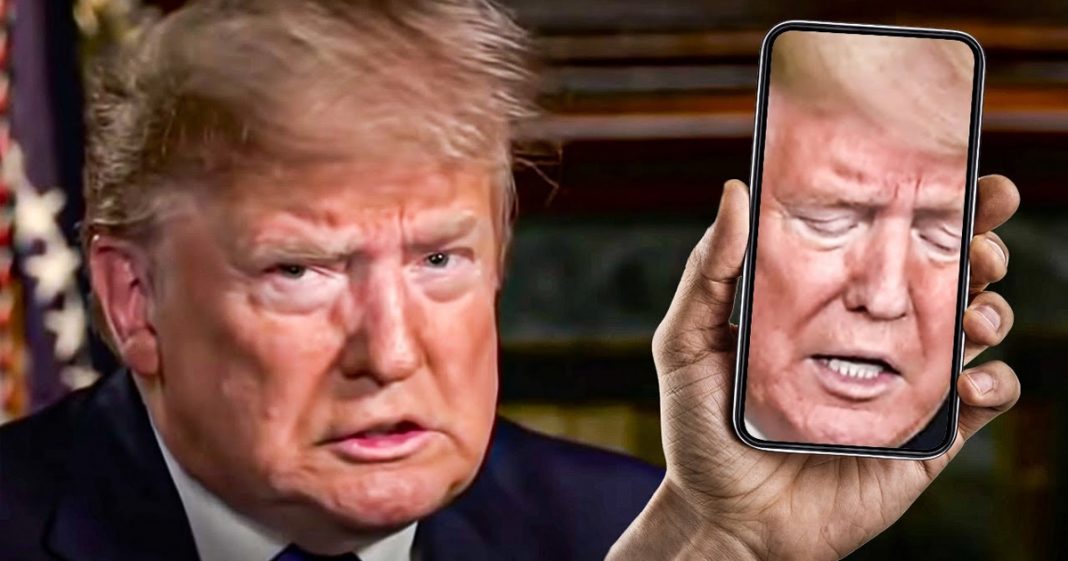 In a completely not-shocking turn of events, the Trump 2020 Campaign app has been found to be sucking up all the data that it can access from the people who have downloaded it, including their contacts, location data, and even their bluetooth connections. The Biden is also taking data from users, but nowhere close to the amount that the Trump team is taking, according to researchers. Ring of Fire’s Farron Cousins discusses this.

An interesting new research report came out this week from University of Texas’ propaganda research team. And what this research team did was they looked at the campaign apps that had been put out by both Joe Biden’s campaign and Donald Trump’s campaign. And what they found was that Donald Trump’s app for his 2020 reelection campaign is absolutely sucking up every bit of data from your cellular, cellular device that it possibly can. Now, Joe Biden’s to an extent is doing that as well. But the researcher said that the Trump app is doing it so much more extensively than the Biden app. Here’s the way both the apps work. The Biden app is mostly a networking tool to find out how you can help the Joe Biden campaign. You know, it does allow you to send text messages to your friends and families through your contacts in there.

You know, hey, vote for Biden, check out this thing from Biden, do this, do that, do that, and that obviously shares your contacts with the Biden app. You can find places to volunteer, so that uses your location. Now the Trump app, on the other hand, the researchers, again, I, I love that at the propaganda team at the University of Texas, they found that the Trump app is just kind of going out there and spreading its dirty little fingers into all of the other apps on your phone, that it can get its hands on. Why? Because your data is worth money. They can sell that data and not just for political purposes, they can sell it to corporations so that they can better target ads to you and your device. That’s what they’re doing. They’ve turned this whole damn thing into a moneymaking operation because of course they did.

They’re taking your data if you download that app and they’re absolutely tracking every bit they can and they’re selling it. Here it is from business insider. This is great. The key difference between the two apps identified by the researchers is this, Trump’s app has a much longer list of permission requests than Biden’s. It wants to read your contacts and know your precise and approximate location, GPS and network based. It requests the ability to read your phone status and identity, a vague permission that sometimes gives access to unique device numbers, pair with Bluetooth devices, such as geolocation beacons, and perhaps read, write or delete from SD cards in the device, according to the researchers. Holy crap, like it wants to read, write and delete things in your SD card, in your phone. That’s crazy and that is, as they said, that’s based on the permissions that you have to agree to when you buy the app or download the app, when you install it.

And if you’ve installed it, you’ve agreed to let them do that. Now there’s geolocation beacons they’re talking about the Bluetooth part, those are things that are starting to pop up, and this is actually something people really, really need to be aware of some apps that you have, or even your phone in general, if you have Bluetooth enabled, you can be walking through a store or walking down the street and if a location has one of these Bluetooth beacons, it automatically connects with your phone. And that way they’ve got your location immediately. You don’t even have to have location services turned on. You can have all of that turned off. You could be as private as possible, but if you’ve opened up an app that you’ve given Bluetooth permission to, or your phone has Bluetooth permission enabled, they’ve got your data, they’ve got your location and it’s being sold immediately.

And that’s what this Trump app is trying to do too. You know, these campaigns, they typically make money by getting donors, you know, to put money in it. But it is a little disturbing, right? That the Trump campaign is getting users to download this app effectively, stealing their data and then selling it for a profit later. That’s what’s happening because folks, if you’re a Trump supporter know this, he has looked at you for his entire life as nothing more than a means to an end, whether it’s to win the highest office in the land or make a few bucks or in this rare instance, possibly the opportunity to do both at the same time.