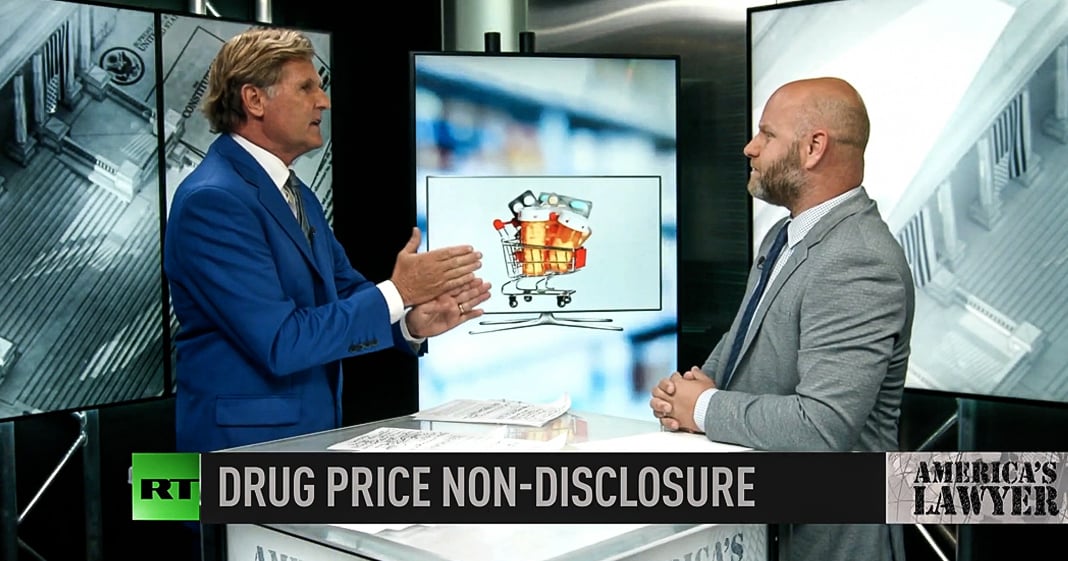 Via America’s Lawyer: A federal judge overturns a rule from the Trump administration which would have required drug companies to disclose prices in TV ads. Mike Papantonio & Farron Cousins discuss.

Mike Papantonio:             A court ruling has destroyed one of the best policies from the Trump administration. I mean, one of the few things Trump did, right. My God, you have an appellate court that always sides with big pharma, always. I mean, as you know, that’s what we do right. Day to day in this law firm, we go toe to toe with big pharma and the, the courts always side with big pharma. Lay this story out for us.

Farron Cousins:                  Health and human services with the Trump administration a little over a year ago, came up with a new rule and said, all right, big pharma, you’re not going to lower your prices. Here’s what you have to do. You have to in your advertisements, put the cost of a 30 day supply of your drugs, what you would charge somebody on Medicaid or Medicare for a 30 day supply of your drugs. That’s it. Just add it to your advertisements. And now this is the second court ruling that says, nope, you can’t do that. You can’t have them put these drug prices on there because it’s unfair. And this decision was headed up by an Obama appointee and a Carter appointee joined in on this ruling. I didn’t know there are any Jimmy Carter judges still out there.

Mike Papantonio:             Don’t we talk about this all the time. We talk about the fact that we have become, people watching this program, have become so tribal. I’m a Republican. I can only think Republican. I’m a Democrat. I can only think of, about Democrat. So now we’re saying what the Obama administration did with court appointments. And we’re seeing the result of that. You realize this court actually said, well, we can’t allow this because it’s confusing. It’s going to confuse, it’s going to confuse consumers. It’s going to be harmful to consumers. It’s a tenuous argument. And what they’re saying is the reason for that is, is because Medicaid and Medicare sometimes changes that price to where they don’t always pay that price. We’re talking about drugs that have a 10000% markup and this damn court doesn’t have enough sense to say that should be important for a consumer. Don’t you think?

Farron Cousins:                  Right. This is exactly what consumers do need to know, even if it’s not the price they pay, they need to know that there are people who have to pay that price.

Farron Cousins:                  You know, there’s inhalers. I actually just had to switch off one, because it was $500 a month. BREO, which is what it was. So I’ll call them out right here by name BREO, almost $500 a month for me. And, and, and people need to know that. They need to understand because maybe their prescription, because 75% of people take a prescription every day, maybe theirs is a generic that’s been out for 50 years and they pay $10 a month. Great. These new drugs, like, like BREO that hasn’t been out too long, they’re absolutely putting people through the ringer for no reason other than they can.

Mike Papantonio:             He also said, I’m going to take on big corporations that are sending business out of the country. They’re sending work out of the country. We have to stop that. So he’s trying to deliver this. One of the few things, I mean, I, honest to God, I can’t even think of anything that this guy has done meaningful. This is one of the biggest problems in America is drug company raping consumers, 10000%. companies like Pfizer and Merck and I could go on.

Mike Papantonio:             Eli Lilly, Johnson and Johnson, raping consumers. So all of a sudden the Trump administration says, we’re going to, we’re going to solve that. We’re going to, we’re gonna make you put your price up there and this court tries to find a way to get around. And I wonder sometimes we always talk about the politics of a judiciary, how dangerous it is when the judiciary becomes political. What is your take on this one?

Farron Cousins:                  I think it’s absolutely obvious that these judges understand there was no danger in this. The only danger came in the form of danger to corporate profits. Merck and Eli Lilly might not have made as much money. Now, they could have still made just as much money. This, this did nothing to lower the actual price. It just said, you have to advertise it.

Farron Cousins:                  And these judges absolutely said, listen, we may, maybe we have corporate backgrounds. I haven’t done huge checks on all these folks.

Mike Papantonio:             Oh, they’ve all done corporate. That’s all these judges are is corporate lawyers.

Mike Papantonio:             Okay. Farron Cousins, thank you for joining me. As usual these stories are important, keep them coming. Okay.