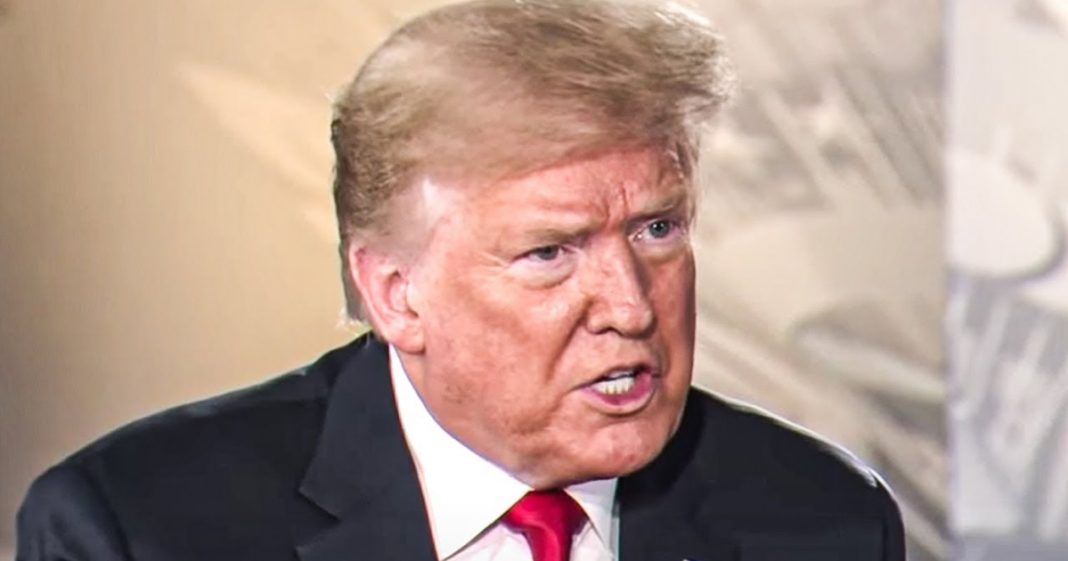 In an interview with Sean Hannity on Thursday evening, Donald Trump said that he (Trump) was the “most perfect person”. The President claimed that a friend told him that, and that he agrees with it. The disturbed audience at the interview cheered for the comment, but Hannity just smiled politely and cut to a commercial. This is a cult, as Ring of Fire’s Farron Cousins explains.

So Donald Trump gave a very bizarre interview to Sean Hannity last night, things got a little off the walls and it didn’t do much at all to convince Americans that Donald Trump was the mentally stable choice in 2020. But one of the things that really caught my attention about this interview was the fact that Donald Trump finally admitted what we all thought for so long and that is that he is just the most perfect person imaginable. Take a look at what he told Hannity last night.

Donald Trump: I think I am the probably, friend of mine said, you have to be the most perfect person.

Now, he started that statement by the way with, I think I am probably, and then, you know, a, a friend had told me you got to be the most perfect person ever and I, you’d have to agree. Right? And then the, the, the disgusting people in that audience, at least they were wearing masks, thank you for that. But they’re clapping and they’re smiling and they’re happy. Like, yeah, you are. You’re so perfect. We love everything about you. And to that, I have to say, what is perfect about this man? His hair, his physique, his intelligence, his business prowess? Literally all of those things are failures. All of them, every single one of them, folks. I’m not sitting here trying to just crap on Donald Trump each and every day because I enjoy it. I’m doing it because the man is riddled with failures and he’s running our government. And how can these people not see this? Because it’s a cult. Because it is a cult of personality around Donald Trump.

Imagine for a second, had any other president, any other president in modern history made that statement that Trump made any of them, the left and the right would have had an absolute conniption over this. Democrats would have been furious if Barack Obama had said this, most of them, some of them would have clapped along like those cultists on the Sean Hannity show last night. Bush, lot of Republicans would have said, now hold up. No, that’s not true. Definitely same thing with Clinton and HW Bush and Reagan and all of that, because there weren’t cults, at least not that large at the time. But what’s happened right now with these Trump supporters is absolutely disgusting and it is absolutely unprecedented. And Trump was not kidding. I know we’re going to see that talking point from all the Republican morons all day on social media, like clearly he was joking. Clearly he was joking.

You know, for people who say that you support him because he says what he means. You’re also having to go out there a lot and tell us what he actually meant. Right? Because he can’t seem to say it. The truth is Donald Trump does in fact believe that he is perfect. He believes that everything about his life has been perfect. He believes that everything about him as a human being, as an organism, is perfect, and it isn’t. Nobody is, that’s one of the beauties of being a human being, our flaws, right? And we accept them. We embrace them. We work on them and it makes us better people. But if you think that you have no flaws, if you think that you already are this perfect person, you have nothing to work on and there’s no way that you can get better. And that’s a problem. Never stopped trying to get better. But Trump has, and he has a long time ago. In fact, he was probably born thinking he was perfect and never once in his life, tried to get better at anything. And that is why we here in the United States are suffering from this incompetent leadership today because we have a president who never once thought in his life that he needed to get better.