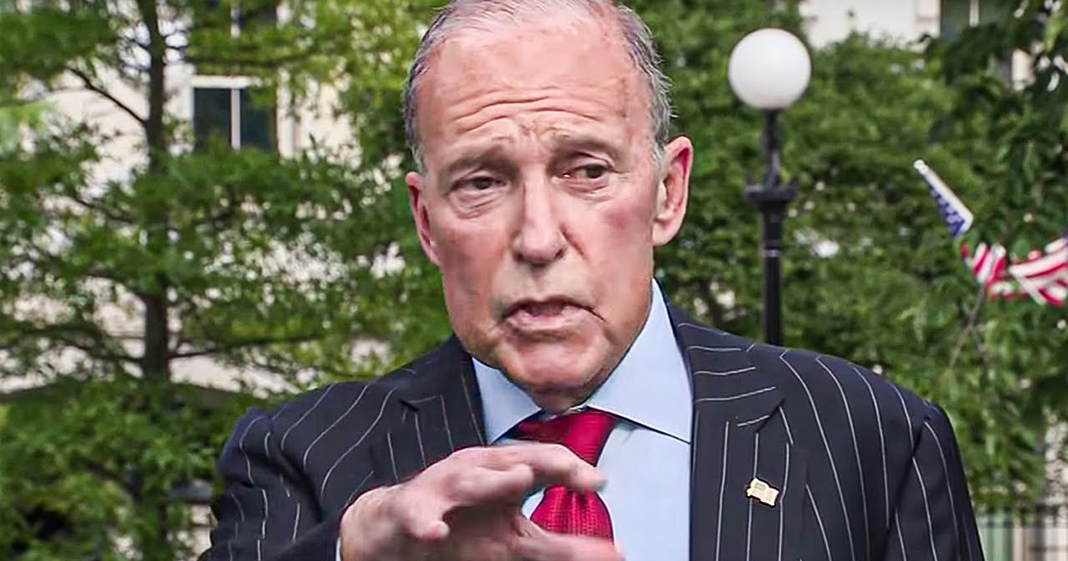 Larry Kudlow, Donald Trump’s economic adviser, says that Americans are just going to have to learn to live with the massive spikes in COVID 19 infections in this country, and that it is just part of our new reality. This is not acceptable, and it didn’t ever have to get to this point. Ring of Fire’s Farron Cousins explains how the failures of this administration are directly responsible for the rising number of infections in the U.S.

Donald Trump’s economic advisor, Larry Kudlow, returned to his old stomping grounds yesterday of, of CNBC. And during an interview on CNBC, Larry Kudlow said that there’s no second wave of coronavirus. No, totally not going to happen. Absolutely not going to happen. We are, however, as he said, we’re going to have some hotspots. So, you know what, suck it up. That’s what happens. Deal with it. Live with it, move on with your lives. I’m Larry Kudlow and I am wearing the ugliest suit you’ve ever seen. He didn’t add the last part, but I did because I saw the clip and it was God awful, not just the suit, but the horrific things that Larry Kudlow was saying. Here’s the exact quote. There is no second wave coming. It’s just hotspots. They send in CDC teams and we’ve got the testing procedures. We’ve got the diagnostics, we’ve got the PPE. And so I really think it’s a pretty good situation. We’re going to have hotspots, no question. We just have to live with that.

Here’s what’s interesting, dude, we don’t, we actually don’t. We, we could prevent those things from happening, but in order to do that, we have to do the one thing that you’re not willing to do and that is tell people to stay home, you know, put the lockdowns back in place. And in order to offset the economic losses from that, we have to send out more stimulus to small businesses, actual small businesses and American citizens, the workers, the people who have to stay home. That’s how you get around this. That’s how you get around the massive economic losses from these lockdowns, but the government’s not willing to do it. I mean, air travel. People are still and have still been flying on airplanes every single day of the pandemic. Airlines are still pulling in money. They just weren’t pulling in enough so they got billions in bailouts. American citizens on the other hand, some of them went months without paychecks. Some of them still don’t have paychecks.

More than 40 million have already lost their jobs. Where’s their billions? You gave them a one time check of $1,200 and expected that to last them through this. So no wonder people were chomping at the bit to actually get back to work. Even though polls showed 86% of people throughout the country were not in favor of lifting the lockdowns yet, but Republicans insisted on it. Republicans like Larry Kudlow. They told us everything was fine back in February, February 25th I think it was, Kudlow went on TV then and said, we’ve contained coronavirus in the United States. That’s what he said on February 25th. We’ve contained it. We’ve contained it. It’s not going to break out. We’ll be lucky if we hit, you know, 30,000 cases because we’re so dang good at it. Oops. Right?

Oops. Or is that a case of we just to live with it? But we don’t, we really don’t have to live with this. If we had even the slightest bit of competence in our federal leaders or for most of us in our state leaders, we wouldn’t have to live with this. We would be on the same trajectory as those other countries across the globe who are safely reopening or the countries who say, guess what, we’ve beat it. We beat it and life is going back to normal. And now they’re the ones who are having to Institute travel bans against American citizens because our leadership is so incompetent and so corrupted and so downright stupid. And yeah I’m talking to you, Larry Kudlow, that all you see is dollars and cents. You see this economy tanking, and instead of thinking, maybe we should help out the workers, your first response is maybe we should sacrifice the workers so that the GDP looks a little bit better on paper.