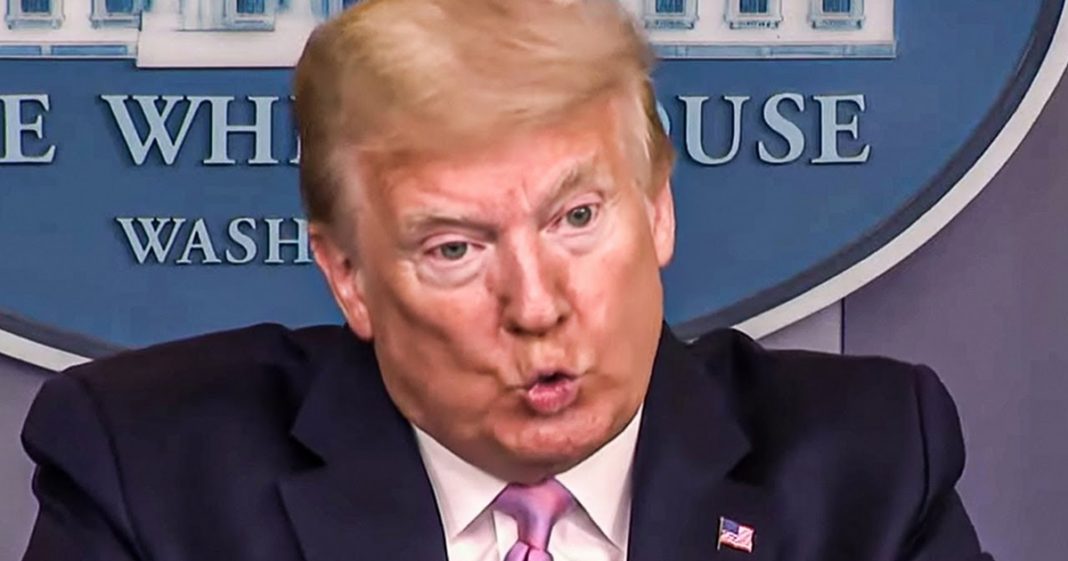 Everyone loves a good October Surprise, and with Donald Trump, there could be plenty of them. There are so many unanswered questions about Trump’s life, his money, and his actions before and after winning the presidency – all of which are being investigated – that any single item could explode and cause cataclysmic damage to Trump’s hopes of winning in November. Ring of Fire’s Farron Cousins explains what’s happening.

This week Politico co-founder John Harris wrote an article where he outlined six different bombshells that could explode at any time between now and November, that any one of them exploding has the potential to take out Donald Trump’s administration and any hope he may have for reelection. And I read through, and I agree with most of the things that Mr. Harris has to say here. There’s a few that I think are a little too outlandish, or I guess debunked at this point, but it is worth talking about some of them here. Let’s start at the top. Number one, according to Harris, the business of the presidency slash the presidency of the business and what he’s talking about here with this particular bombshell, that is a ticking time bomb if you ask me, is Donald Trump’s financial information from his businesses. What are you doing?

And who are you doing it with? How much are you really worth? Did you lie about that net worth to the banks in order to secure more loans? Because we’ve already seen some documents that have been provided that show that the amount of money you reported to one company is not the same amount of money you reported to a different company. Now that is financial fraud, if it was intentional. So that’s the kind of thing that the public needs to know about. And that is the kind of thing that those investigators up in New York that they’re trying to shut down, that’s what they’re trying to find out. So yes, that is a particularly big bombshell because that is not the kind of thing that Donald Trump would be able to pardon himself for or another president would be able to pardon him for, should he go down for that in the state of New York.

Another thing is the real inner circle, the people who know Trump best. Are any of them going to come forward? And he’s not talking about, you know, oh, no, no, no, no. He’s talking about people like Mary Trump with her book. Are there going to be more Mary Trump’s? You know, why are we not hearing from the ex-wives, right? I am sure they’ve got some pretty interesting stories to tell, but I’m also sure they’ve all had to sign nondisclosure agreements and they don’t want to lose those, you know, very, very nice settlements they got from those divorces. But you may also have former maids, former, you know, housekeepers, bodyguards, you know, butlers, whatever, whatever you have. Those people have seen some things, let’s be honest. That’s what Jonathan Harris or John Harris has, excuse me, they’ve seen things. They’ve, they’ve probably walked in on things and they know a lot.

And these are people who may not be sitting on mountains of cash that they have to protect with nondisclosure agreement. So at this point, maybe worthwhile for them to go ahead and come out and I think that’s what mr. Harris is trying to coax them to do like, hey, you know, come on, come on. I’m sure plenty of people would chip in money if there was a lawsuit and these people had to pay Trump something. Bombshell number four, when the documents speak. Now that’s a big one too, obviously. Donald Trump has been trying to hide lots of different documents. You know, whether it’s his financial records, whether it’s his tax returns, whether it’s the business taxes and finances, all of it, this man is fighting tooth and nail all the way up to the Supreme Court to keep this stuff hidden. But there’s other ones that Harris also hasn’t mentioned his, his college transcripts.

Where are those? Literally every part about this man’s life that wasn’t in the public he is making sure, never gets seen by the public and that’s not an accident. It’s not because Trump’s a very private individual. No, he’s a very public individual who’s done some very bad things privately that he doesn’t want us all to know about and that’s why he’s hiding these things. He doesn’t want us to think that he’s not the man that he’s built himself up to be in his head. We know he’s not, but he doesn’t know that we know he’s not, he can’t accept that we know that he is not. If he would accept it, maybe he’d say, oh, screw it. Yeah, here’s my grades. I made D’s and C’s yeah, whatever. What are you going to do? I’m president now. It doesn’t matter because honestly, folks, it doesn’t matter. It really, really, truly doesn’t matter what those college transcripts say, but it would be fun to see them. Wouldn’t it?

Another one it says, what is the real state of Trump’s health? Now that’s a good question too. We still don’t know. We still don’t know the truth about this man’s health, about his physical health, about his mental health. You know, reports came out earlier this week that he is obsessed with trying to convince people that he’s totally mentally stable and that he aced that cognitive test they gave him back in 2018. Totally could name all of the animals that they showed him pictures of. He could repeat those five words for the Montreal cognitive assessment, which is what he took. It’s a very basic test and he said they were floored without great I did. Well, that’s awesome, man. That’s really super great for you. But that was also two years ago. Probably time for another one, but you’re hiding that just like you’re hiding the rest of everything.

So yeah, between now and November, anything could happen. There could be bombshells that we haven’t even predicted yet. There could be more stories about Donald Trump coming out and asking other countries to interfere in our election, just like John Bolton’s book alleges happened. We never know. We might know, maybe we’ll get a good October surprise or maybe we shouldn’t have to rely on some kind of, you know, fate to intervene and say, hey, Donald Trump used to kick puppies as his hobby. No, maybe we should try to come up with good policy on the left, sell it to the American public and have them choose that in November, instead of saying, well, I can’t vote for Trump because of scandal X, Y, or Z. No, let’s give them something to vote for instead of something to vote against.