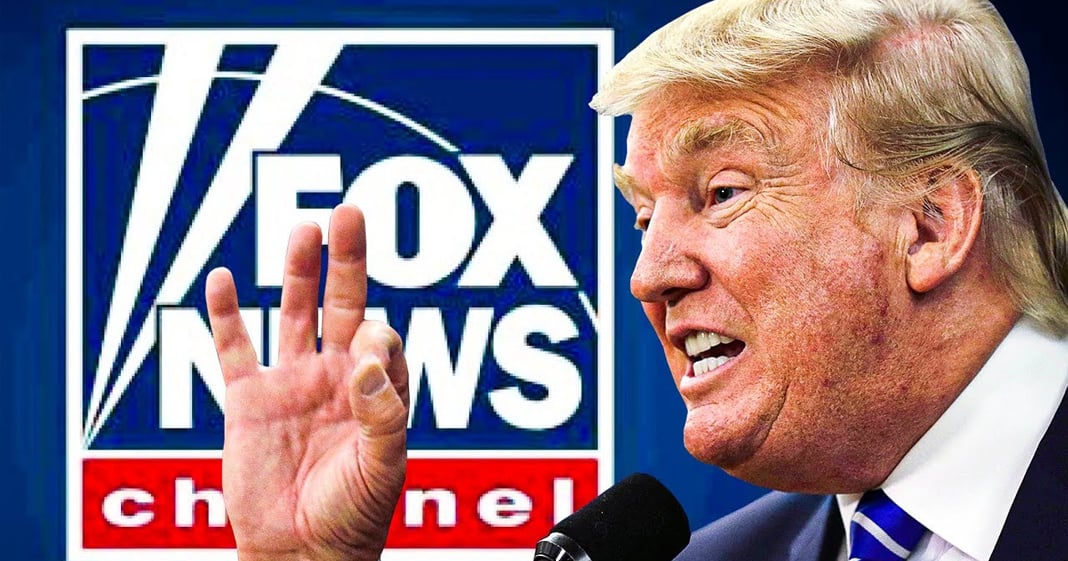 Donald Trump has just about had it with Fox News, and with some of the hosts, the feeling appears to be mutual. On Thursday, the network aired a segment where they were critical of Trump’s disgusting photo op in front of St. John’s Church in D.C., and the President once again took to Twitter to express his outrage at the network. If he continues to think that the network actually works for him, its going to continue to get worse for him, as Ring of Fire’s Farron Cousins explains.

Fox news has a problem. Well, I guess if we’re being honest, Fox news has many, many problems, too many problems to list. But one problem that they have developed in recent months, a problem they never thought they would have as a network most likely, is the fact that they can’t stop pissing off Donald Trump. And for the record I love it, I think this is absolutely fantastic. Yesterday in the morning, Fox news air day segment where they were slightly critical of Donald Trump and his photo op from a couple of weeks ago in front of St. John’s Episcopal church there in DC. They said that, you know, he, they gassed the protestors. They, I guess said he held the Bible upside down, and Trump went absolutely ape after this. He took to Twitter and he angrily typed out the following. He said, a Fox news commentator just ripped me with lies with nobody defending.

They talked about the friendly protesters. They set the church on fire the day before. They were anything but friendly and how I stood and held the Bible upside down. It wasn’t upside down. No, see, here’s the thing, they were not the ones who actually set fire to the church. That had happened the day before with a different group of people. The people you gassed, the people you had forcibly removed for exercising, their first amendment rights, those were just straight up peaceful protestors who had every right under the constitution of the United States to be peaceably assembled in that particular area. They didn’t work well for your photo op, so you and your justice department, William Barr, violated the US constitution to remove them. So yeah, even Fox news is probably gonna have a problem with that because they love to wrap themselves in the constitution and I guess occasionally they read those words too, at least a little bit of them. Probably haven’t made it past amendment two. But they understand that what you did was wrong, or at least some of the folks there do, but because of that, they keep pissing him off.

And another thing happened on Fox news yesterday, too. As of me sitting down and recording this, I have not seen if the president has responded yet, but they released another poll showing that he is losing to Biden still by double digits. And those polls never sit well with the president. He always lashes out at Fox news. He hates when their pollsters tell him things that are true and so he’s gonna get mad at them saying they’ve hired bad pollsters. You know, they’re getting swindled and, you know, the same old song and dance that we have seen for several weeks now from this man. But here’s the thing, Fox news does not in fact work for Donald Trump. Yes, there are plenty of people on that network that are 100% going to do whatever they can to distort reality, to make Trump look better.

Sean Hannity is right there leading the charge because even after Trump had this meltdown yesterday morning, in the evening, he actually did an interview with Sean Hannity. And we got a clip of that coming up later on today, but that’s not the entirety of the network. That sure as hell isn’t the executives of the network and it’s not the people working behind the scenes to produce the segments either. I’m sure you’ll find plenty of Trump supporters among all of those ranks I just mentioned, but the ranks are starting to shrink. It’s not all a bunch of Sean Hannity’s running around Fox news. Some of them have a brain. None of them have a conscience. If they did, they wouldn’t still be there at Fox news. But some of them do understand that it is their job to report the news, whether or not it is flattering to Donald Trump is irrelevant.

The news is the news, but Trump can’t handle that. So Fox news is losing him as a viewer and he’s going over to the One American News network, which is just full blown, Trump propaganda all day, every day. But that’s what he wants. That’s the kind of thing he’s looking into because when all this is over, when the presidency is over, he might fade into obscurity, but not if he has networks like OAN on his side to continuously remind us long after he’s gone of what an awesome president he was. He will end up in some kind of partnership with OAN when all this is over and Fox news hosts like Sean Hannity will be kicking themselves because he could have been with them, but they just had too many people at their network, probably less than a handful, who simply wanted to tell the truth about the news of the day.