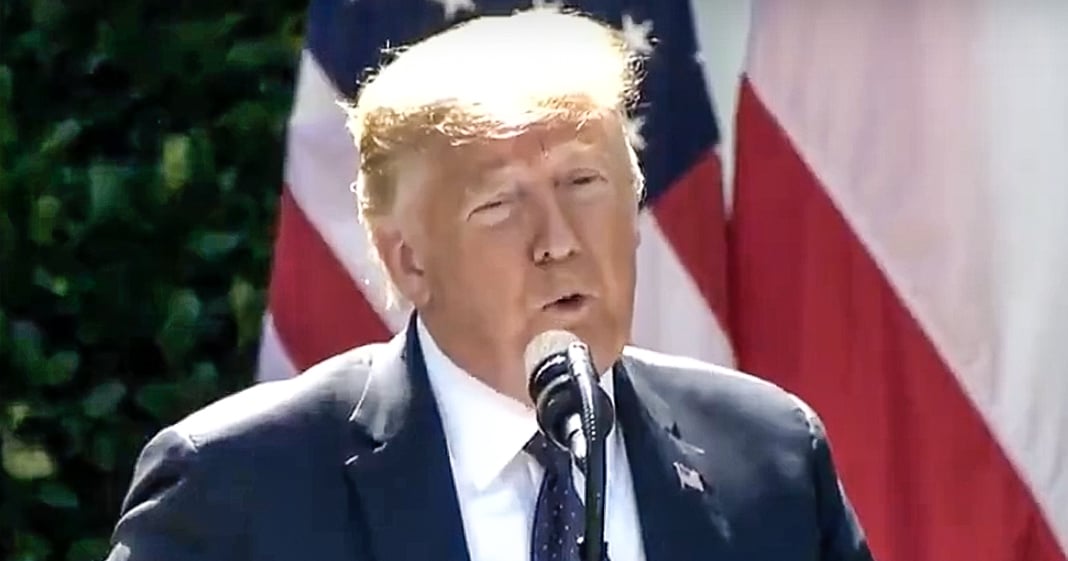 Donald Trump is going to New Jersey, whether they like it or not. The state has instituted a mandatory 14-day quarantine order for visitors entering the state from areas with surging Covid 19 cases, but the President says that he will be ignoring those orders and going about his business as usual. We have seen other world leaders quarantine themselves after possible contact with the virus, but Trump acts like his frail body is somehow immune. Ring of Fire’s Farron Cousins discusses this.

So this coming weekend, Donald Trump has decided to do what he has done statistically every couple of days since becoming president and that is go play golf. And this time he wants to go play golf at his course in Bedminster, New Jersey. There’s a problem though. Technically, according to an order from the governor of New Jersey, just like the governor of New York and the governor of Connecticut, Trump’s not allowed in New Jersey right now, nobody is if you’ve come from a state or been to a state recently, that is experiencing a huge surge in COVID-19 positives. And Trump has, Trump was just in Arizona, on Tuesday, and he wants to go to New Jersey this weekend. And according to the rule that the governors of those States have put in place, including New Jersey, Trump is supposed to go through a mandatory 14 day quarantine before he is allowed to come into the state of New Jersey.

And his administration announced this week that no, he’s absolutely not going to do that because that order from the governor, that’s only for civilians, not for the president, goofballs. So he’s coming to New Jersey, he’s bringing his secret service folks with him. They’re all showing up there. They’re not going through quarantines, even though they’ve been to areas with high rates of infections, even though their own staff has seen a surge in infections and they’re coming to New Jersey, whether you like it or not, you can’t stop them. I understand their reasoning behind this a little bit, to be honest with you. Yeah, like it is the president. You really can’t tell the president no, you can’t come into my state. I also understand their argument that, hey, listen, the dude’s getting tested all the time. Our staff’s getting tested all the time. We’re making sure that, you know, they’re, they’re, they’re safe.

That everything’s okay. Fantastic. But here’s the thing. It’s not like you’re coming to New Jersey because you’ve got some important business to do there. You’re going to New Jersey because your boss wants to play golf at his own golf course. So he’s going to cost taxpayers a lot of money that the money will be spent at Trump’s own golf course. So it eventually will make its way back into his own pocket and your deliberately ignoring an order from the governor of that state putting lives at risk. Because even though you’re testing all the time, you’re not doing anything to actually prevent the spread. All you’re doing is trying to catch it when it happens. That’s reactive, not proactive. So you’ve done nothing to make sure the man doesn’t get the infection to make sure the secret service doesn’t get the infection. Because we all know Trump doesn’t like masks. He doesn’t like to be around people wearing masks. So yeah, the dude could still have it. The dude can still catch it and he can spread it in the state of New Jersey or anywhere else he decides to go. Trump may think he’s above the law, but he’s not. Trump may think that his fragile, frail body is immune to this virus, but I can promise you, it is not.

Trump wants to golf. He wants to play. Well, guess what? A lot of us do. A lot of us, it’s summertime. We would like to go on, you know, summer vacations with the families before school starts back. We would like to be able to go out and have a normal life again. But we can’t and part of the reason is because of you, Donald, because you have done such a horrendous job with your response to this pandemic, we’re still stuck at home and sure our States are opening back up. But the flood gates for the virus had been opened up too, yesterday was the worst day on record so far. So it’s actually getting worse. It’s not safer to go out. It’s more dangerous now. A lot of us had plans. A lot of us had ideas. A lot of us had things we wanted to do to go out and have fun and we don’t get to do them. But Trump, God forbid somebody tell him that he can’t go play golf for the 300th time in the last three and a half years.