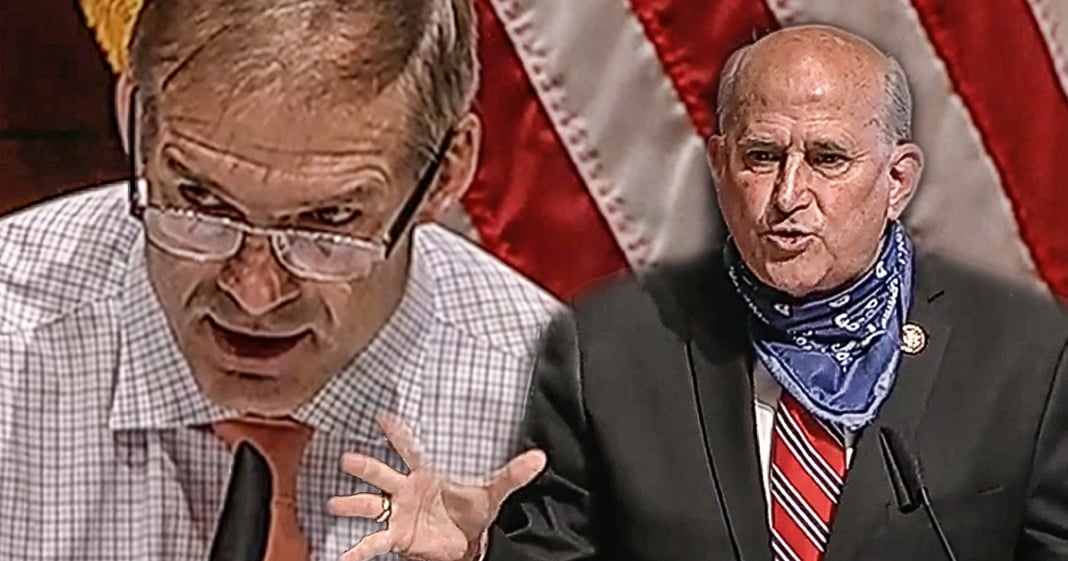 The House Judiciary Committee heard from multiple witnesses and whistleblowers yesterday, and they all told similar stories about Attorney General William Barr abusing his power. In many instances, he would abuse his power to appease Donald Trump. And Republicans on the committee knew that this made them look bad, so they decided to counter this damning testimony with childish antics and games. Ring of Fire’s Farron Cousins explains what happened.

Yesterday, the house judiciary committee held hearings with whistleblowers and other employees from the department of justice where each one of them told a similar story. And those similar stories all had to do with attorney general, William Barr, abusing his power as attorney general, to appease Donald Trump and of course, to promote Barr’s owned political agenda. A couple of the things that we learned from these whistleblowers in the department of justice were one, William Barr going after the marijuana industry, because William Barr just doesn’t like marijuana, much like Jeff Sessions before him, right. Had a, had a big issue with that. The jazz cabbage, not a big fan, even though it’s legalized and so William Barr made it his personal pet project to go after some of these legal marijuana companies here in the United States. He also got far more political and far more sinister with the cases that he intervened on that had to do with Donald Trump and his buddies specifically, according to one of the witnesses, threatening to fire people if they did not request a reduced sentence for Roger Stone.

The threat of firing could’ve been explicit or implicit, but everybody who worked on that, according to the whistleblower, said that we were under the impression based on what Barr had told us if we didn’t request the reduced sentence for Roger Stone, we would be fired and removed from the DOJ forever. These are pretty damning revelations, and there’s plenty more to go around, but something else happened during those hearings too. Republicans on the committee proved that they were nothing more than whiny, petulant, little toddlers, who didn’t want to hear the truth. They didn’t want to hear about reality. They didn’t want to hear about even more potential crimes of abuse of power by members of the Trump administration. So they acted like kids, kids that were a little bored because their parents were talking to their friends in the grocery store a little too long. And it all started not surprisingly with Republican representative, Louie Gohmert.

Louie Gohmert did what Louie Gohmert does and he made a spectacle of himself that Republicans throughout the rest of the hearing decided to draw upon as well. During one of the opening statements from one of the witnesses, the witness went a little over five minutes, which is their allotted time. And as the witness went over five minutes and the Democrats running the committee did not cut him off, Louie Gohmert started doing this. Just this, just tapping loudly. So loud into the microphone in front of him that you couldn’t hear the witness. Here’s the exchange that took place. This is insane. I’m sorry for laughing, but it’s insane because Louie Gohmert is crazy. This is what he said. Well, this is what happened. Mr. Chairman, I would ask that the Sergeant at arms be called upon to stop the disruption of this meeting said representative Hank Johnson, a Democrat from Georgia. I can’t hear this witness. This is a very important witness. Yeah, well he’s way beyond his time, Gohmert responded. And if there are no rules about when people can talk, there are no rules about when you can make noise. Such a child and this is an old man. Louie Gohmert is not a young individual. He is an old man behaving like this because the people in Texas look at Louie Gohmert and they said, hell yeah, that’s our dude. We’re going to send him up there, yup.

Sorry, if that’s rude or offensive to you, people in Texas, but that’s what Louie Gohmert is. And I imagine that is what every single person who voted for Louie Gohmert acts like and speaks like, right. You’d have to, to send an asshole like that to Washington DC. And yet that’s what the people of Texas continue doing and I wish that was it. But you also had representative Mike Johnson of Louisiana, also a Republican who took a personal shot at the witness. This was a witness who, by the way, had to testify remotely, you know, via webcam from his house. He and his wife just had a kid. He didn’t want to risk getting himself or the child or the new mother sick. So he testified from home and Republican Mike Johnson, Johnson repeatedly throughout this man’s testimony tried to dismiss it because he didn’t even take the time to come here. He’s, he’s quote, phoning it in the man said on two different occasions, phoning it in.

We can’t take him seriously. What the hell does that have to do with it? Like he’s not serious suddenly because he’s actually taking the pandemic seriously. Unlike the Republicans in this country, that makes no sense, but the Republicans wanted to make it all about anything other than William Barr needing to be impeached. Here’s some of the other topics that Republicans brought up throughout the hearing yesterday, Carter Page Joseph Mifsud, Mifsud, Hillary Clinton, of course, and of course, fast and furious. They brought up the Russia probe. They brought up Robert Mueller. They brought up everything under the sun that had nothing to do with why any of those people were testifying yesterday, just because they couldn’t handle the truth that William Barr is as corrupt as anything else in this country. And William Barr deserves to be impeached. And William Barr very clearly has committed the crime of abuse of power. That was the story that was told yesterday and Republicans had to act like whiny colicky babies to get people distracted enough so that they didn’t hear the story of William Barr’s criminal behavior.