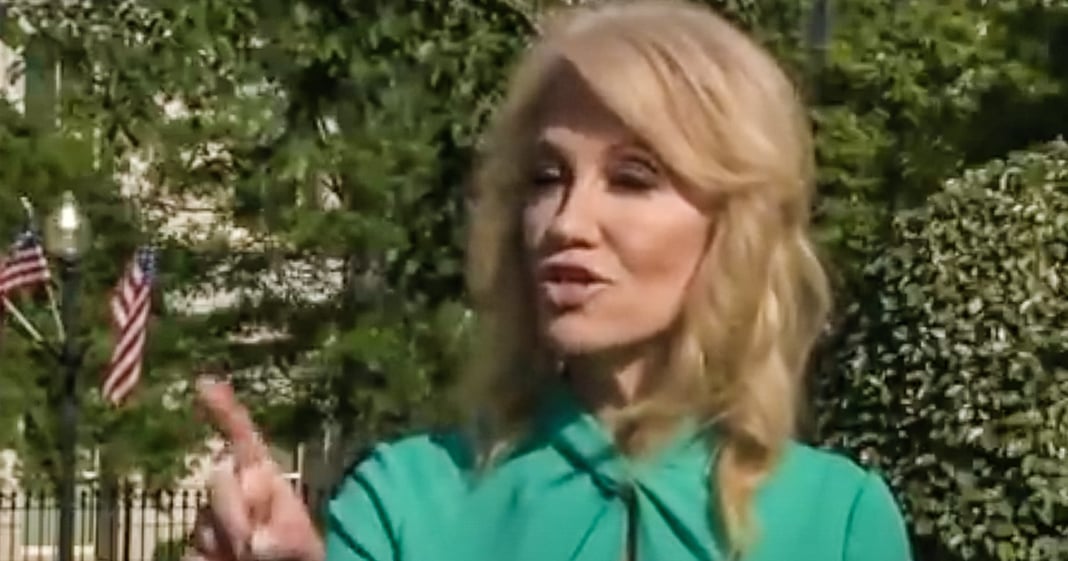 Kellyanne Conway wants to make sure that Americans don’t blame Trump for the spike in Covid 19 cases in this country, so she has decided to reverse course from a few months ago where she said that the term “Kung Flu” is offensive, and she now says that Trump’s use of the slur is necessary so that people start blaming China. China is not to blame for the failures in the United States – that blame rests solely on Trump and voters know it. Ring of Fire’s Farron Cousins discusses this.

Back in March, March 18th, to be exact Kellyanne Conway was asked about Donald Trump using the term Kung flu, or actually I think it was just members of the administration in general using the term Kung flu and Kellyanne Conway demanded to know from the Asian reporter who asked the question. Who was in the administration saying this phrase, she had never heard it. This wasn’t a thing that they were saying. And yes, by the way, it is highly offensive Kellyanne Conway told the world on March 18th. Well just yesterday during a press conference, Kellyanne Conway had a much different story to tell. She said that it’s not offensive to use that phrase after all, all Trump’s do and when he says it is trying to remind people that the virus came from China. Here, here’s from business insider at a press conference on Wednesday. Conway defended Trump’s use of the term last Saturday and on Tuesday much to his supporters delight, Conway said labeling the coronavirus as the Chinese virus or Wu Han virus helps Americans see that the president blames China for the pandemic.

The justification echoed that of white house press secretary Kaley McEnany who on Monday insisted that Trump was simply putting the onus back on China. Yeah. Except Kung flu, that, that doesn’t, that’s not a place in China. Kung flu is not a country. Kong flu is in fact a slur referring to a country. Here’s the thing too, I know even, you know, what’s his name Bill Maher has said, well, why can’t we call it the Chinese virus? Here’s, here’s why. It actually, it has a name. And I know we we’ve talked in the past and we’ve learned about the Spanish flu. Oh, that’s named after a place. Okay. Well, what’s the actual scientific name of the Spanish flu, does anybody know? Anybody? No, see that’s why we call it the Spanish flu. This one coronavirus COVID-19 we actually have several different scientific names for it that people were more than happy to use. It was only as this thing progressed that right-wingers and shit libs like Bill Maher needed a country to blame because God damn it it can’t be America to blame here is it?

So they start calling it the Chinese virus or the Wu Han virus or in Trump’s case Kung flu, which yeah, that’s racist. That’s a slur and you’re a jackass for saying it. We have names for this thing. You can call it COVID-19. You can call it coronavirus. You can call it the pandemic that’s happening for all I care. But the bottom line is your attempts right now are not to remind people that it came from China. But to shift the blame from your crappy response, that’s what you’re doing. Yeah, sure. It originated over there as far as we know, but that has no excuse for what has happened here on American soil. That is no excuse for the federal government cutting, cutting funding for coronavirus testing. That is no excuse for Donald Trump lying and saying that he inherited no ventilators from Barack Obama and the national stockpile, and then admitting this week. Oh yeah, we actually had 16,000 in the national stockpile.

The man has lied about every single possible thing with regards to this virus, to the pandemic, to what Obama may or may not have left him. And he himself has made these decisions, any attempt to label this virus as not coronavirus or not COVID-19 is just an attempt to shift the blame off of Donald Trump. He is the blame for all of this. Every bit of it, every single part of it. Do you know why? Because he’s the president of the United States and nobody else in this country on this planet is. It’s him and if he can’t accept responsibility for it, then he needs to resign immediately. Right? This God damn second. Because at the end of the day, the buck stops there and he can’t handle it. He’s not smart enough. He is not tough enough. And he is not compassionate enough and neither are his supporters and neither is his administration or his staff. Kellyanne Conway is a frigging ghoul, a racist ghoul.

She has thrown away any shred of dignity that she may have had because back in March, by the way, she pointed out that hell yeah, it’s a racist term because her husband is of Asian descent. Her kids are Asian American and she is now put her loyalty with Donald Trump instead of over our own kids. I hope your kids understand that Kellyanne. I hope they leave you. I hope they desert you. And I hope they never speak to you again. That’s what I want. I want that to happen because that’s what you deserve. I don’t know much about your career before you joined the Trump administration. Maybe you had a soul then maybe you didn’t, but I know for a fact you don’t have one now. You have no empathy. You have no compassion. You are a fucking goblin.