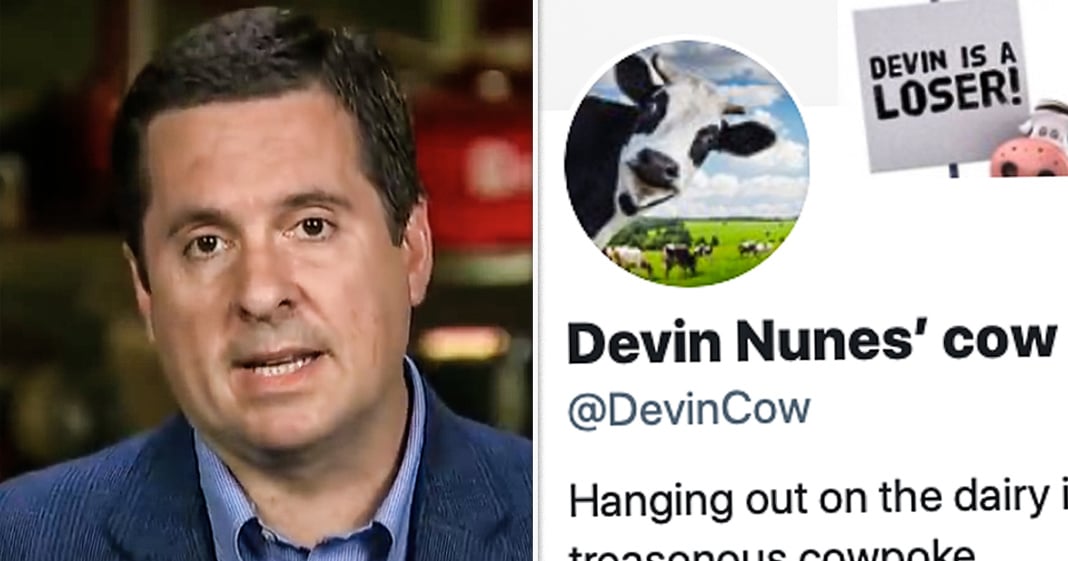 Republican Rep. Devin Nunes suffered a major setback in his lawsuit against Twitter and several parody accounts on the social networking site this week when a judge ruled that the thin-skinned Congressman can’t sue Twitter for comments made on their site by other people. Social media outlets have immunity from such lawsuits if they are not the publisher of the content, but Devin’s lawyer indicated in his arguments that this wasn’t the real goal of the lawsuit anyway. Ring of Fire’s Farron Cousins discusses the nefarious motives of Nunes.

Poor Devin Nunes just can’t seem to catch a break. Not only does he have all of these parody accounts on Twitter, mocking him relentlessly, many of which actually have more followers than he does now on Twitter. But he also in his attempts to sue these parody accounts and hold them accountable, continues to get smacked down by every judge that gets their hands on this case. The most recent one was this past Friday, when a judge ruled that Devin Nunes cannot in fact, sue Twitter, the actual company, over the fact that there are people on that website, making fun of him, mocking him and being parodies of his cow and his mother. The judge said you can’t do that because Twitter actually has immunity under section 230 for anything said on their website, as long as Twitter, the company did not play a role in crafting it.

It’s very obvious in this particular instance, Twitter is not actively helping people write tweets to mock Devin Nunes. So the judge has now removed Nunes as a, or excuse me, removed Twitter as a defendant in this case. The lawsuit is still moving forward, apparently, against the parody Twitter account, Devin Nunes’ cow. Devin Nunes’ mom and against a political strategist, Liz Mair, I believe her name is. Those are the three people who are still technically being sued by Devin Nunes. Twitter itself cannot be sued and Devin Nunes’ lawyers are not happy about this. They absolutely wanted to go after Twitter. And they said that in this particular instance, section 230 immunity does not apply to Twitter because they’re engaging in political activity. You know, they’re, they’ve got political bias. They’re clearly, according to Devin Nunes’ lawyer, Steven Biss, they are clearly in favor of liberals over conservatives.

They are silencing conservative voices, this idiotic lawyer tried to argue in court and therefore section 230 immunity does not apply. Judge said it wouldn’t matter if they actually were engaging in political bias, section 230 does in fact still apply no matter what, because there is no political bias exemption to it. Now you would hope that your lawyer would know that and that they wouldn’t resort to such petty and callous arguments in a court of law, trying to allow this suit to go forward. But what the lawyer did in that particular instance was he showed his cards. He showed Nunes’ cards because that’s what they wanted out of this. Devin Nunes isn’t actually thinking he’s been defamed. I know he’s argued in court that the attacks from these groups have caused him to win his election by a smaller margin than he’s used to.

You cannot prove one way or another that that is actually a direct result of these Twitter accounts and therefore the defamation suit against them should immediately be thrown out on its merits, by the way. He wanted the suit to continue and he wanted it to go against Twitter so that they could go through the discovery process and see if they could find any memos from within the company showing that they were silencing or shadow banning conservatives. That was their goal. That’s what they wanted to do and now they don’t get to do it. Not that there’s probably going to be anything about that. You know, conservatives love the whine all the time that if they send out a tweet and it doesn’t immediately get 40,000 likes and retweets that they’ve somehow been shadow banned. They can’t admit to themselves that maybe you just didn’t send out a tweet that was as clever as you thought it would be. Hey, we all have that problem sometimes, right?

We think we have a good zinger in there. We think we have a witty comment or fun observation about the news of the day and then, hey, it falls flat. Happens to the best of us guys. Doesn’t mean we’ve been shadow banned and it doesn’t mean that Twitter is engaging in some kind of bias to suppress our totally awesome tweet that deserves to be liked by a hundred thousand people. That’s not how it works and Devin Nunes also found out that he and his lawyer clearly don’t know how the law works and that’s why Twitter is no longer a defendant in this lawsuit. And as such, it will be interesting to see how much longer this lawsuit goes on now that the big fish has been, has been taken out of the pond there. I don’t think Nunes is going to go much further with it considering the fact that one, the case really doesn’t have a whole heck of a lot of merits or evidence to suggest that Nunes has, suffered any actual harm as a result of these two parody accounts. And two, let’s not forget that he still doesn’t know who these parody accounts actually are and Twitter has refused to give up those names. Those don’t sound like the makings of a lawsuit that’s going to go on for much longer.