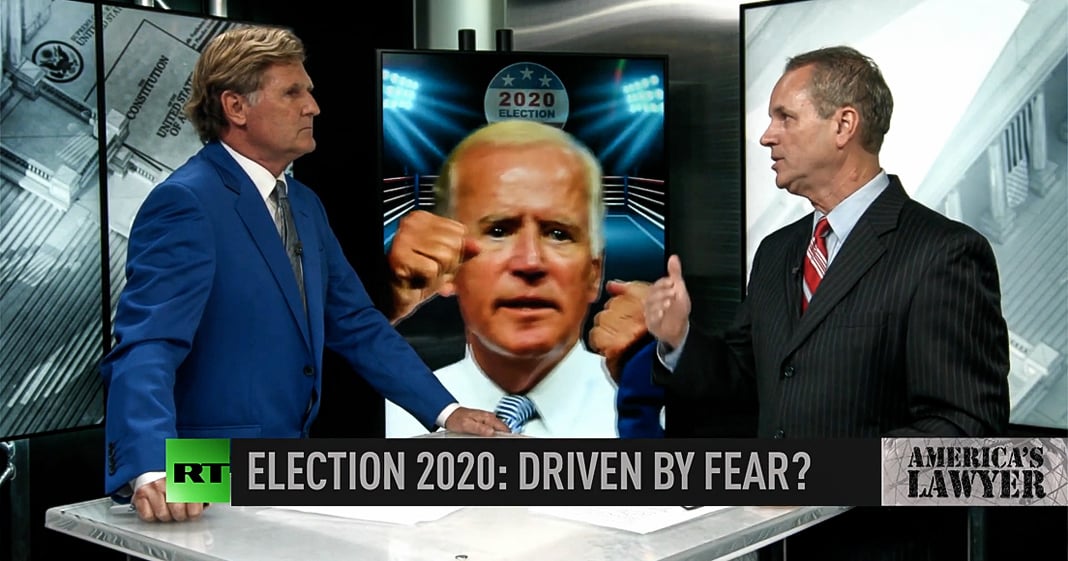 Via America’s Lawyer: With Biden’s poll numbers surging ahead of Trump’s, how much of this swell in support is driven by fear? Media analyst David Lamb joins Mike Papantonio to explain more.

Mike Papantonio: Recent polls have shown a widening gap in support for president Trump. And Joe Biden as the country continues to deal with coronavirus pandemic and widespread protests for the police reform, well, he’s benefiting from all that. How are the political tides shifting during this time of crisis? With me is media analyst, David Lamb, one of the best in the country, we can usually, you know, we can count on what you say. You know, I, I totally lost confidence in, in the last cycle. I mean, really they can defend themselves all they want. It was a, it was a, it was a disaster. So let me, let’s talk about this. What to you, as you see these trends taking place, I saw a Fox poll of 1300 registered voters. Biden’s 50%, Trump’s 38% a four point change. What does all this mean right now?

David Lamb: Yeah. So the, what it means is the Trump train is stalled at the depot while the Biden bus is barreling down the highway. A 4% bump, Biden continues that ascent. He is even outpacing, not only Hillary Clinton, much more steady, but as, as his, as, as his poll numbers continue to increase the question for Trump, Trump campaign, Trump supporters, what has to happen to stall that, that, that Biden surge that continues to grow month by month.

David Lamb: He does.

Mike Papantonio: Okay. We know his, we know what his game plan is.

David Lamb: He’s got a bag of tricks.

Mike Papantonio: The Dems are a disaster for the economy. If the Dems win, the entire United States is going to look like Chaz, up in Seattle, Washington. This is this, this is his game plan.

David Lamb: Yeah, it is.

Mike Papantonio: And so what has, what happens with this kind of movement? Fear? Tell me about the fear card. How does it figure?

David Lamb: So here’s what’s interesting, in that Fox news poll what I found really interesting other than just the numbers, is they were asked about passions and motivations. Take a look at these numbers Pap. So when it comes to the fear of the other candidate, Biden supporters, 63% fear Trump. Trump supporters, 31% fear Biden, which basically nonexistent. Enthusiasm for candidate, 31% of Biden supporters are excited about him. 63% of Trump supporters excited, excited about him. What has to happen is Trump has to demonize Joe Biden. Make him scarier.

Mike Papantonio: He’s got to bring up the negatives.

Mike Papantonio: He’s got to bring up the negatives on Biden and this, this game plan, we will see it playing out. I thought it was really interesting, you know, this thing about the Biden’s brain being fried, and we’ve heard that it’s, it’s, it’s just part of the talking point.

Mike Papantonio: Now to, to handle that. Did you see the ad where they have Biden and Obama running down a hallway? Like we’re healthy. There’s no problem there. And then we have Trump looking, just decrepit, walking down a ramp.

Mike Papantonio: So that is the, that’s, that’s part of it. That’s the beginning.

David Lamb: That is.

David Lamb: Definitely fear. That also really affects the, those voters 65 plus. Those voters are so important because they show up at the polls and they have forever. The young voters, the millennials get all the attention, but, but they’re much less consistent than those 65 plus voters. Biden has a 10 point lead, which last election cycle Trump won them by 8%. election cycle before that, Mitt Romney won those 65 plus voters by 12. So basically a 20 point switch there.

David Lamb: Gore was the last Dem to win.

Mike Papantonio: Okay. So he has to pick up these voters and fear is the best card. You know, we’ve got this radical left, that’s supported by the Democrats. It’s who they are. They’re trying to burn down the country. They’re tearing down statues. They’re burning up cities. Go, I thought it was interesting, Trump says, I’m going to let Chaz play out to let the American public look at it and understand that this is what, this is what the Dems want for America. Isn’t that part of the Karl Rove plan?

David Lamb: That, that is definitely the plan and the poll numbers actually back that up. A, a survey by FiveThirtyEight, 60% of registered voters, you know, we’ve heard this term defunding the police, 60% of registered voters oppose defunding police. Democrats oppose it 40, 50 to 34. Republicans, 84-11. But get this, another poll. Do you support defunding the police? 34% of the country supports that, 7% of Republicans. Trump has to stay on message. Karl Rove is going to push him to do this. A lot of time in Tulsa was spent on a number of other things.

Mike Papantonio: He was talking like a crazy man.

David Lamb: He was.

Mike Papantonio: If you listen to Trump, he was talking like a crazy man and the, the interesting thing is, Rove is already there. Rove heard him say, look, our guys, he actually said something like our guys.

Mike Papantonio: Whatever that means, are tougher than you snowflakes, and you don’t want to mess with us. This Is the president of the United States saying that.

David Lamb: So off message. He has to, Trump has to target and be disciplined to, to ratchet up the fear of Biden. Link him with the radical left, with the riots, with the protest, with, with, with the LA the, the looting and the rioting. Right now, he’s, Trump is spending his time on all over the map. He’s got a center that message and be more disciplined.

Mike Papantonio: Yeah, and you got Biden still down in the cellar and his handlers are so terrified to let him out of the cellar.

Mike Papantonio: Does he need to get out of the cellar? Maybe not, maybe not.

David Lamb: Yeah. The, the, the Biden basement strategy. He has gained four points, Pap.

Mike Papantonio: While he’s been down in the cellar.

David Lamb: By doing nothing.

Mike Papantonio: Biden says three. Have you ever seen numbers change in as few as three debates? Is, will that move the needle with a guy like Trump?

Mike Papantonio: Give me some comparisons. Is it even, is it even appropriate to draw comparisons between the Clinton disaster and what many people are going to say is going to be a Biden disaster? Any way to draw parallels?

David Lamb: I don’t know that there are parallels because Biden’s lead is more solid, more consistent, more steady, and, and Clinton’s was all over the map. Clinton from month to month, she went 10 points up to two and a half points down. Biden has not shown that tenacity, but again, everything has been about Trump. It has been about Trump and the strategy just to allow Trump to sink his own ship. And he’s doing that.

Mike Papantonio: Okay. So Karl Rove has to get in his head.

Mike Papantonio: Stick on it and then everything’s going to be okay. Now, is core is, is, is Trump’s core staying with him?

David Lamb: They’re showing some signs of weakness. I, inside the Republican party and especially on down, you know, the, the Senate races and all the other on down the ticket and down the ballot, there is concern. That, that’s why I think he is getting pressured and Rove is getting pressured.

Mike Papantonio: Rove is back because he’s worried about the Senate races.

David Lamb: There is legitimate concern.

Mike Papantonio: Three races that could go back.

Mike Papantonio: Real quick. So it’s kind of about Trump, but they’re really looking at the Senate. There’s some talk that maybe they flip the House. I don’t see how they do it. They need 17, what? 17.

David Lamb: 17. I’m curious. Do you think Trump’s going to listen to Rove?

Mike Papantonio: No, I don’t know. He’s incapable. He doesn’t have, he just doesn’t have the mental wherewithal.

David Lamb: I think that the GOP establishment, it’s time they have to rally those troops and say listen up.

Mike Papantonio: Chamber of commerce needs to say, you know what, pal, no more money until you start playing by our rules.

David Lamb: Got to get his attention.

Mike Papantonio: Yeah. David Lamb, thank you for joining me.

Mike Papantonio: We’re going to do this every other week. See what you’re.

David Lamb: Look forward to it.

Mike Papantonio: See what your thoughts are. That’s all for tonight. Find us on Twitter and Facebook @facebook.com/rtamericaslawyer. You can watch all RT America programs on Direct TV, Channel 321. Also stream them live on YouTube and be sure check out RT’s new portable app. It’s not just about RT programs. It’s about all the programs. I’m Mike Papantonio and this is America’s Lawyer where every week we tell you stories that the media, corporate media, is ordered not to tell because their political collection, connections don’t allow and because their advertisers tell them under no circumstances may you tell that story. Have a great night.