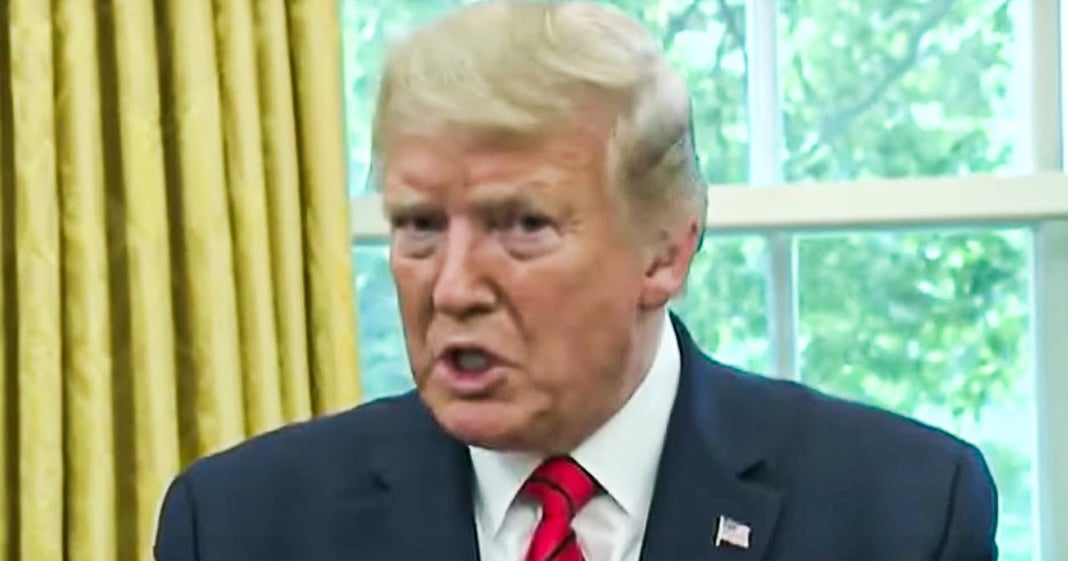 The latest round of state polling has more bad news for Donald Trump, as both he and rival Joe Biden are within the margin of error from one another in the state of Texas. A Democrat has not won the state of Texas in a national election in over 40 years, but that might all be changing in 2020. Ring of Fire’s Farron Cousins explains what is happening and why it is driving Trump crazy.

You know, it’s been a really long time since Donald Trump has gotten any good news in quite possibly any poll out there and unfortunately for him today is no exception. The latest round of polling out of the state of Texas shows that Donald Trump and Joe Biden are now in a statistical dead heat in the state of Texas, a state that Democrats have not won in a presidential election since Jimmy Carter won it in 1976. So we’re talking 44 years Democrats haven’t won Texas in a general, and here we have a statistical tie between Biden and Trump. And we say statistical tie by the way, because it is not tied in the actual polls, but due to the margin of error, either candidate could come out on top. When that is factored in. Currently Trump has a 48% to 46% lead over Biden in the state of Texas.

That is a lead of two points with a margin of error of three points, making it a statistical tie. Then as Josh Holland tweeted out this morning, he says Biden now has a double digit lead in the nationwide averages and leads by an average of 5.7 points in Wisconsin, Michigan, and Pennsylvania, and 6.2% in Florida. Holland also goes on to say, usually the race tightens as we get closer, but the models project COVID deaths to rise sharply in October. So who knows? I think we all kind of know what is happening here, Josh and, and you definitely do too. You’ve done this a long time and you’re very smart. Trump has no message. He has no plan. He has no solutions. He has no coherent talking points or messaging for his campaign and Biden, as flawed as he is, and man is he flawed.

People are willing to overlook those flaws because Trump is so bad. You know, the negatives on Trump are so much worse than the are with Biden. In fact, the only thing you could construe as a good poll for Trump that has come out recently is the poll that shows that only 30% of Biden voters or Biden supporters support him because they’re enthusiastic about him. The rest of the support for Biden, the 70% or so is from people who just hate Trump. Now, Trump is the opposite. His numbers are about 70%, enthusiastic about him, 30% because they don’t like the Democrat. Those are horrible numbers for Biden and if we wake up tomorrow and the pandemic is over and the economy is fixed and the trade war has ended, and Trump says, I’m gonna do something about pharmaceutical prices then yeah, Trump’s going to win. And if he does cure those things overnight, maybe he deserves to win. Nah, he doesn’t deserve to win even if he does that, he’s a horrible racist piece of trash.

But Biden is benefiting from the fact that this man is so incompetent and so universally hated across this country. And with the polls, you know, statistical tie in Texas, you know, the numbers that Josh Holland tweeted out, winning in all these swing States, that absolutely puts Biden in, in the white house, a hundred percent if the election were held today. But it also shows you this, those hardcore MAGA hat wearers that we see on social media, you know, the ones we see sometimes driving around with all the Trump flags hanging out of their cars. The ones we see lined up outside the rallies, folks, that is not a majority of people in this country. That is not even a majority of Republicans. Those are very slim, tiny minorities of crazed Trump cultists. They do not represent any real fraction of the American public. So even though the media likes to hype them and we see the crowd of 10 or 20,000 people. Been awhile since we’ve seen a crowd that size, but we’ll see them again, they will re-emerge, you got to remember that’s 10,000 people out of 330 million. They mean nothing and these polls are showing us that those freaks we see lined up outside those arenas, that’s not enough, not even close, close enough to save Donald Trump.