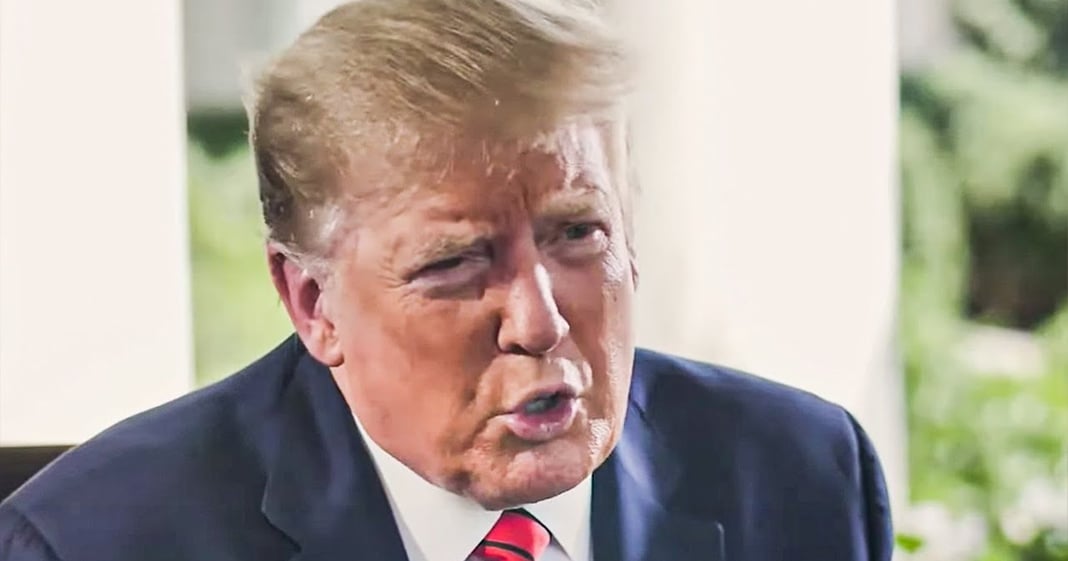 During an interview with CBN News this week, Donald Trump claimed that Barack Obama somehow committed treason when he allegedly spied on Trump’s campaign. The attacks on his predecessor are growing out of control, and Trump is using these false claims as a way to drum up more support from his ever-shrinking base. Ring of Fire’s Farron Cousins discusses this.

During an interview that aired on CBN news on Monday, Donald Trump accused Barack Obama of committing treason against the United States. And he comitted treason, according to Donald Trump, by having his campaign wiretapped. That according to Donald Trump is in fact treason against the actual United States itself, which is what treason is. He said the following during the interview, you said, it’s treason. Look, when I came out a long time ago, I said, they’ve been spying on my campaign. I said, they’ve been taping. And that was in quotes and meaning a modern day version of taping. It’s all the same thing, but a modern day version. But they’ve been spying on my campaign. Except they hadn’t been spying on your campaign. There were people involved in your campaign yeah, who they had the FISA warrants for and they were looking at those people because turns out, oops. They were actually criminals.

So yeah, those people absolutely. But your campaign as a whole, that’s not a thing that actually happened. And we know that it didn’t happen. One, because you’ve actually looked into it and there was nothing prosecutable there. You didn’t find any evidence of wrongdoing by the Obama administration or at least anything illegal by the Obama administration that was, that you were able to pursue. So we know that everything you’re saying right now is an absolute lie. Most of the time, whatever you’re saying is an absolute lie and that’s according to the fact checkers, but this one is verifiable easily by your own administration. And to anyone out there who does think that Obama somehow wiretapped Donald Trump or that this story is true. Let me ask you this. Why then did the Republican controlled house of representatives and the Republican controlled Senate and the Republican controlled white house, not investigate this or prosecute or bring any charges against Barack Obama during the first two years of the Trump administration, when they had all of those bodies under their control?

They could have done it. If they thought there was a there, there they would have done it. After all, it was only about a month or two or three into the Trump administration that he made these claims. He made those claims before the Mueller investigation even happened. So you mean to tell me that if there was any credibility to these claims and the Republicans controlled the House and the Senate, they all just sat there and said, wow, that’s awful. Obama’s a bad guy. Too bad we won’t do anything about it. Bull. If they had actually thought, if there was any evidence to suggest that Obama or members of his administration had done anything wrong or anything criminal, those morons who controlled the government at the time, absolutely would have launched investigations.

They didn’t and therefore we know there is no there, there. But that’s not even the craziest thing that Trump said during his little diatribe here. He went on to say that maybe these people, at least back in the day, would have been murdered by the state for what they did to his campaign. Here’s what he said. If it was the opposite two years ago, 25 people would have been convicted and they would be, they would be sent to jail for 50 years. And by the way, if it were a hundred years ago or 50 years ago, they would have been executed. But we’re in a different time. We’re in a different time. You understand what I mean by that? You, you want them dead is what you mean. They spied on the opposing party’s campaign and we caught them. I just hope I get tremendous evangelical Christian support.

Ah, there it is. That’s why you did it because you have to be the victim because you’re such a little, I can’t say that word of because YouTube will get mad. But, you know, it starts with a P and we know that’s what he is. He’s, he’s a wimp. He has to be the victim and that’s the only way you can get people to support him. Look at, oh, poor, sorry, pitiful me. Please support me. I’ve been treated so unfairly in my life. Gee, I mean, I failed upwards at every opportunity. I have more money than most Americans could ever even dream of. I’ve been given chance after chance after failing repeatedly. Still won the presidency, even though 3 million more people voted for my opponent, but please feel bad for me. No, to hell with this guy and to hell with anybody who’s conned into thinking that Barack Obama or his administration actually did the things that Trump is accusing them of.

I’m not a huge fan of what happened during the Obama years, but I will absolutely say had there been illegal activity, given the hatred that Trump has for Obama, that the Senate has for Obama and that these Republicans in the House have for Obama. Don’t you think that if he’d done something illegal, they would have one, found it in the investigation they already did, or two gone ahead and prosecuted it when they had all the authority that DC had to offer. They didn’t do either of those things, which proves nothing Trump is saying about Obama committing treason or spying on his campaign is based in reality.