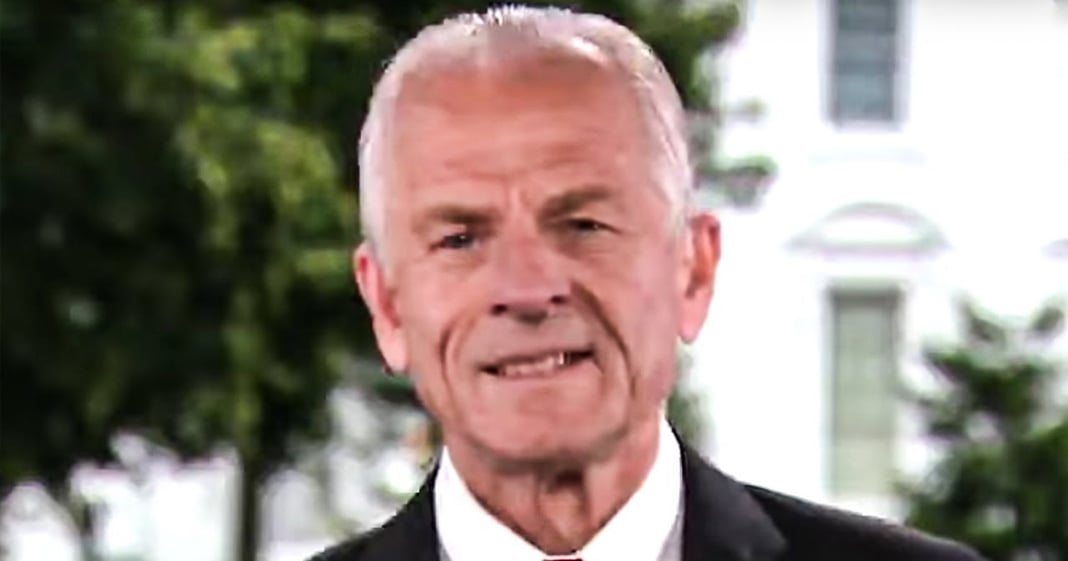 One of Donald Trump’s top officials and advisers on trade – Peter Navarro – has finally admitted that Trump’s trade policy and discussions with China have been a failure and that they have now fallen apart. This is a massive problem for Donald Trump as we head into November’s election, and if Democrats are smart, they will use this as a way to turn voters away from Trump. Ring of Fire’s Farron Cousins explains what’s happening.

I know it’s easy to forget right now with so much going on, even just here in the United States. But we also have to remember that we are still in the middle of a trade war that the president started for no real apparent reason. So that’s still a thing that’s going on. It’s still a thing that’s ravaging the economy, in addition to the pandemic. We have seen record breaking numbers of farmers here in the United States have to declare bankruptcy, you know, generations of farming families put out of business because of Donald Trump’s actions. So what’s going on with all that, right? I mean, last we heard, he was in talks with China. Things were going well, you know, they had like a three step plan or something. They were already into step one of it. So what’s, what’s going on? Well, according to a Trump advisor and one of his top trade advisors, Peter Navarro, yeah, it’s all done. It all fell apart. Every bit of it was an absolute failure. We’re back to square one.

So Trump, the master negotiator, the guy who said, we can do this, we’ll do it great. We’ll put the pressure on them. They’re getting hurt so bad. They’re getting spanked by these sanctions or excuse me, trade wars. Yeah, the tariffs are killing them over there. We’re doing great. They’re going to cave any minute now. Everything’s falling apart and we’re back to zero. That is what Peter Navarro said in a Fox news interview earlier today or this week, excuse me. Here’s the exact quote, it’s over. It’s over, just two words. It’s over. That is what the question was. Given everything that’s happened and all the things that you just listed, is that over? And that’s talking about the trade deal with China. It’s over. So there is no relief in sight for the Americans who have been harmed by Donald Trump’s trade war.

You know, the farmers, the manufacturers, the factory workers, all of the people throughout this country who have been personally impacted by Donald Trump’s decision to launch this ill-advised trade war with China. It’s over. Much like a Bush with Iraq, there’s no exit strategy here. There’s not even really clear goal here, is there folks. If you were to ask a random person on the street right now, the average American voter, what’s the goal of Donald Trump’s trade war? What is he attempting to do here? Why did we get into the trade war? Ask them any of those questions. They’re not going to know the answers because there are no clear answers. The president has never fully explained why this needed to happen. He said, Oh, we’re getting raked over the coals. Okay. They’re taking advantage of us, he said, okay. But how, in what way?

How can you articulate that in a way that makes any of this appear to be worth it? You can’t, and this especially hurts the president as we head into November. Because not only does he have his ridiculous response to the pandemic, working against him, his pathetic and disgusting responses to the civil unrest in this country working against him. But now he can’t even go to the polls or to the voters and say, listen, I worked out that trade deal I told you I would. But instead we’re more than two years into these trade wars, they’re ravaging the US economy. And there’s no end in sight now because all of the talks have fallen through. And part of the reason Navarro says, the talks have fallen through, is because China has been lying about the coronavirus. They lied about their numbers and we just can’t trust them.

Well, how the US has been lying about our numbers since day one. The US has been lying about when we knew about the virus and that’s actually what they’re accusing China of doing. That’s one of the reasons the US you know, has kind of walked away from the table Navarro said in the interview, because they knew all the way back then and they didn’t tell us. Well, the official word out of the administration is that y’all didn’t know until the end of January, but there is a record of y’all having a meeting with Chinese officials the first week of January, where this was one of the topics of discussion. So you’re doing the exact same things you’re accusing China of doing. Is China manipulating things to look better? Probably.

But you 100% verifiably are okay. And you’re sitting there having the audacity to say that they’re doing these bad things. So we just had to walk away from the trade deal. I believe nothing that came out of Navarro’s mouth about the trade deal. I believe that he and his buddies in the Trump administration, including Trump himself are so bloody incompetent that they can’t get this done. And part of the reason for that is because none of them even understand what it is they’re trying to do or what they’re trying to accomplish.