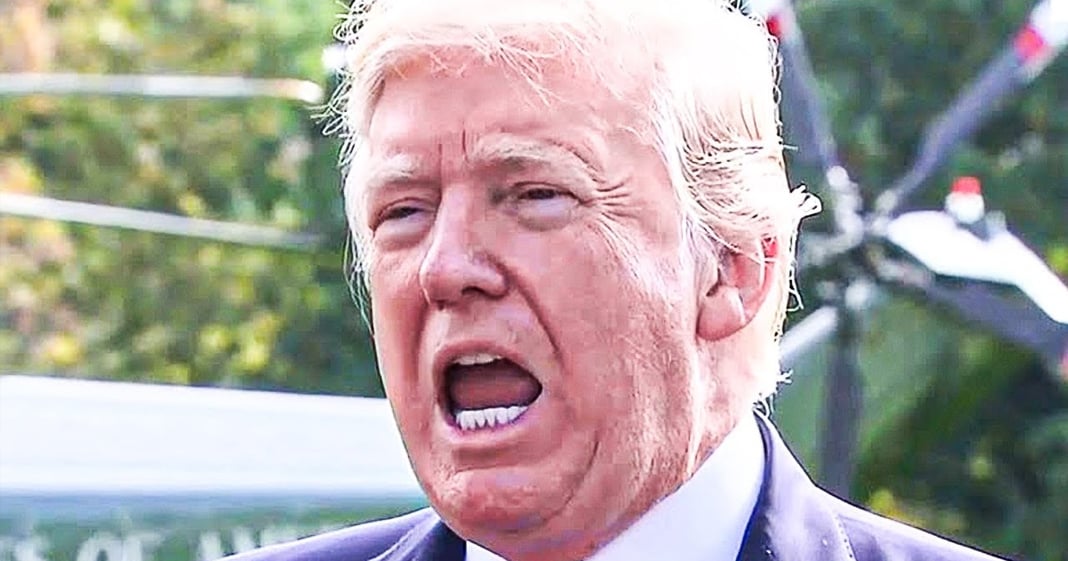 Without any evidence at all to back up his absurd claims, Donald Trump said on Monday that foreign countries would be able to print ballots and mail them to people in the United States which would then skew the results of the election. There is no low that the man will not sink to in order to suppress the vote in 2020, and his Twitter tirade based on pure fantasy is just further proof of this. Ring of Fire’s Farron Cousins discusses what’s going on.

It’s always fun when we get a new Donald Trump right wing conspiracy theory that has no basis in reality, it doesn’t even have any kind of evidence whatsoever to attempt to back it up. It’s just something in this case, William Barr made up out of thin air that Donald Trump took and ran with to create a new conspiracy theory on Monday, when Donald Trump tweeted out the following. He said, rigged 2020 election, millions of mail in ballots will be printed by foreign countries and others. It will be the scandal of our times. And he had caps lock on throughout the entirety of that tweet there. I don’t know if that was intentional or if it got stuck and he couldn’t figure it out either way, it was, it was yelling mail in ballots, being printed by foreign countries. They’re gonna flood the US market.

People are going to be so confused. They’re going to be voting like five or six times. States and election boards are going to be so dumb that they just count like 8 million ballots. Even if they only have a County of 500,000 people, because they don’t know the difference. Total chaos, everything is going to be screwy and Trump’s doing this because he knows he’s going to lose. His poll numbers are so bad. Tulsa kind of confirmed it over the weekend that he ain’t where he was with the support, even among the hardcore and so now he’s like, well crap. What do I do? I’m going to lose. So I have to make it look like I didn’t lose and so, oh, well, let’s go back to this voting fraud thing. And on Sunday, William Barr, as I mentioned, attorney general of the United States goes on Fox news with Maria Bartiromo and he said, the following, he said, right now a foreign country could print up tens of thousands of counterfeit ballots and be very hard for us to detect, which was the right and which was the wrong ballot.

They could in theory, just like they could be out there printing out all of these counterfeit dollars, but we do have systems in place to make sure that that doesn’t happen. I mean, that’s why, you know, dollars in the United States continues to evolve to make it harder for people to counterfeit. We have the technology for that. It’s actually pretty easy. So why could we not go ahead and implement some kind of counterfeit protection measures into these ballots? Doesn’t seem to make a lot of sense, does it? The federal government literally has whole people whose jobs it is to prevent counterfeiting. Like that’s, that’s what they do. That’s their career and then they retire and then somebody else does it. Why not maybe have those people, like, just, just talk to them. Maybe just take them out to lunch one day and be like, hey, by the way, we got to print things out, you know, about printing things and making sure they have safe guards so they’re not counterfeited. What are your suggestions? Because you’re the expert.

Or even if you can’t put any counterfeit protections in a ballot, I understand that that’s hard. It’s on a different kind of paper, not necessarily easy to put those little strips in there. What you could do is instead make them all certified mail. Did you ever think about that? You own the mail so you don’t have to actually really pay for that. You should pay for it. You could pay for it. But have each and every one of them certified, you have to sign for it. That’s how, you know, it’s the real deal, then you’re good. I don’t understand what the problem is. There’s lots of different ways to get around this, but let’s not forget the big thing. There’s literally no evidence to back this up. That’s probably the part we should be focusing on. Let’s stop trying to fix a problem that hasn’t even occurred yet and focus on the pack, the fact that Donald Trump and William Barr are trying to lie to you to go ahead and try to justify the fact that he is about to get his clock cleaned in the November election. That’s what this is all about.