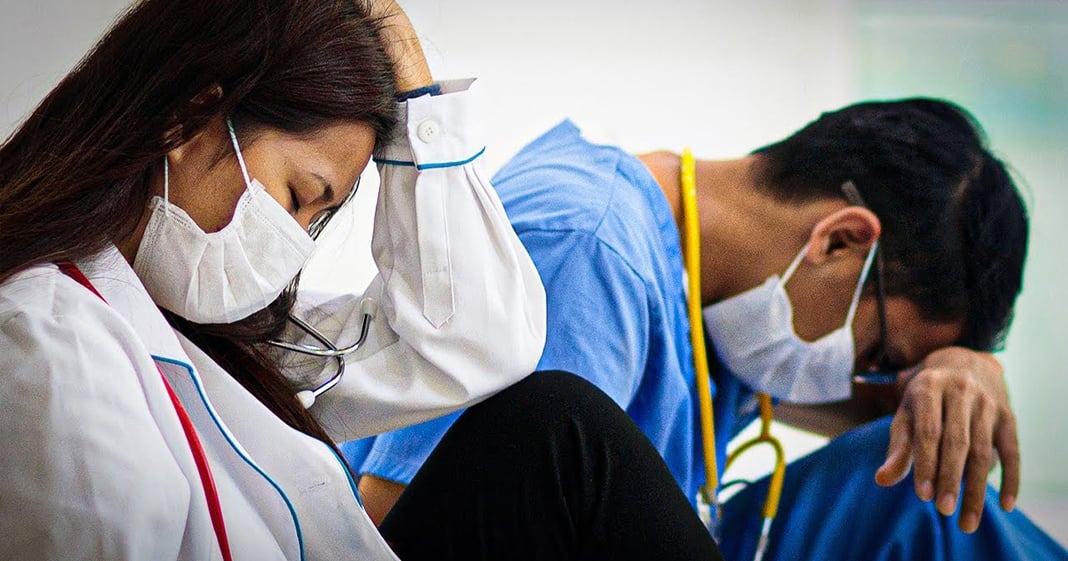 As the number of Covid-19 cases in the United States continues to rise, states are pushing forward with misguided reopening efforts. Global health experts are now horrified because all of the moves that the US is making indicate that we have completely given up our fight against the virus. And they are correct. Failures with federal government, corporate overlords, and even American arrogance caused the virus to spread far and wide. Ring of Fire’s Farron Cousins discusses.

Experts on public health from all around the globe are now starting to express outrage, shock and horror over the fact that they believe that it appears as if the US has officially given up trying to fight COVID-19 here in the US. And to be honest, they’re right. It absolutely does look like we have given up as a country. That we simply don’t care. You know, we got tired of having to stay home and we just wanted to get out. And that is true to an extent, we are a very uniquely arrogant people here in the United States, but that’s the tiniest part of the puzzle. What these researchers and public health officials from all over the world, what the leaders over in Europe are talking about right now is not the anger of the American public saying you’re not going to infringe on my rights to make me, you know, force me wear a mask.

You’re not going to do that. What they’re talking about is the failure of leadership here in this country. And that’s the real problem. Yes, we have problem with individuals. Can’t do a whole hell of a lot about that, but what we can do is change the leadership and yes, it starts at the top. It starts with Donald Trump. The man has done absolutely nothing. The man has actually made things worse. We know that. He has delayed. He has denied, and he has tried to cover up as much as possible. But it’s not just Trump, leadership of both parties in the Senate and in the house of representatives has been absolutely horrendous during this entire crisis. We had them all come together, handout hundreds of billions of dollars to wall street, to the top 1%, inject it directly into the stock market. And what did we, the people get?

Well, if you means tested low enough, you got a one time check of $1,200 and an additional thousand dollars for every kid you have. If again, you didn’t make more than $150,000 a year. If you’re married $75,000 a year, if you’re single, that’s what you got. One time payments. And that was supposed to get you through 10, 12, 16 weeks, however long you had to be without a job. Our numbers in the United States are rising. I know some people like to say, oh no, they’re tinkering, they’re not tinkering with anything. The numbers are rising because we’re being forced to go back to work. And we’re not choosing, by the way, to just go back to work, you know, all those phony protests of people saying, I need a haircut. I want to work. 85% of the American public said we should not reopen yet, but States went forward with it anyway. Mostly Republican controlled States.

They were the first ones, but then democratic controlled States followed right after, 85% of the country said no, but these people didn’t have a choice. The businesses they worked for, forced them back. And then the predictable happened, obviously, cases rose. So Europe is wondering what the hell is going on in the United States, New Zealand questioning what the hell is going on in the United States? Why aren’t they doing what we did? These other countries are asking, you know, we’re watching our cases disappear. Their’s getting worse than ever. I have to read this quote from common dreams. These paragraphs, this is phenomenal. After spending 4% of its GDP on coronavirus relief, which covered all wages for New Zealanders, who had to leave work to self isolate, doubled healthcare spending and provided subsidies to businesses so they could maintain their payrolls. New Zealand announced in late April, in late April, that it had effectively eliminated the coronavirus.

As a Friday, the country had only three confirmed cases of COVID-19 in the past three weeks because they spent money giving it to people and giving it to small businesses. They took care of their people. They spent money on healthcare. They spent money on testing and contact tracing, and wouldn’t you know it, they knocked it out. One of the first countries on the planet to actually knock it out and overcome it and move on. Life is normal now in New, New Zealand. Other countries where case numbers have dropped significantly in recent weeks include Canada, Denmark and Germany also introduced far reaching economic relief packages early on in the crisis to enable people to stay at home and avoid overwhelming the healthcare system in those countries. In the United States we didn’t do any of that. You got your one time check. We increased unemployment benefits by $600 a week.

And Republicans have made it clear, they’re going to kill that this first chance they get, as soon as it expires, cannot and will not be renewed Mitch McConnell tells us, and Democrats have said that, eh, we’re probably not going to fight for it. You know, nothing’s off the table. We might even let corporations have immunity from lawsuits if they force you back to work and then you get coronavirus. That’s where we are as a country. Failures across the board. Failures on the left failures on the right. And all I can say is that everyone in a leadership position in Washington, DC should be voted out if they’re up for reelection in November, case closed. I don’t care if it’s a Democrat. I don’t care if it’s a Republican. At this point, as we have seen with this crisis, the whole crop is rotten and the only choice at this point is to throw it out.